So when does an ignore user or downvotes system get implemented?

Discourse is great, threads cluttered up by trolls - not so much.

Dispatch from Black Rock City: "The pigs are here" at Burning Man boing

(take a SWAG at which is the troll)

We have “likes”, will there be Discourse dislikes, unlikes or report trolling functions?

Right off the bat part of my brain went ‘Yeah! Somebody should give us all a button to stop that with FIRE!’

And then part of my brain started pummeling the part that had that thought, and others rose to his defense, and it quickly devolved into an all-out fracas.

A few good bits popped out of the aftermath though, so if anybody here did the same thing maybe knowing you’re not alone will help provide a bit of relief? I’m pretty sure we can’t offset the actual riot though, unless you’re way cooler than me, because once things started going I wasn’t really capable of rationally thinking things through.

See what I mean? Without all of that we’re risking killing exactly the moments and conversations that would give us something really positive about that sort of system.

I wonder if they just saw all of that and have experienced some of other negative experiences and just left us with only positive as an option.

Still, maybe a couple of those, wisely implemented and with other good ideas, could kick us into the future?

Just a guess, I have only opened the top of the topic at the moment, but I am thinking maybe it is this person?

These patterns are generally … bad in my experience.

FWIW, I don’t believe the indicated user is a troll. She’s been in the community a long time, and I disagree with her about a whole lotta things, and she often strikes me as more than a bit of a scold, but her opinion is as least as valuable as mine, certainly at least as sincere as mine, and just because certain topics might motivate her to ride her hobbyhorses more vigorously some days… well, that doesn’t make her a troll.

Posting enthusiasm for a given topic might not always be that irritating, and an automated system for warning a user if they post too much in a given thread might conceivably backfire (for instance, if the creator of some nifty thing featured in a post decides to contribute to the discussion and ends up answering a pile of questions). I assume a system of upvotes & downvotes might let us know what opinions are popular and which are not (and yeah, could enable a user setting to automatically hide posts of a given level of unpopularity for those who embrace the hivemind, ha-ha), but I think until we reach the point of actual community moderation, situations like this are best dealt with at the discretion of the actual mods.

I’m not even going to ask who we’re talking about; I don’t have to. She isn’t “in” the community, Donald, unless all that holds us together is anger. Is that how we define ‘community’ at BoingBoing? Attacks and counter-attacks? Taking comments as personal slights where none was offered?

If she has any respect for the opinions of the commenters here, she’s failed to show it for TWO YEARS! So we must conclude that her purpose here based on the tone of her replies is to express her anger and disappointment with us. Is this the ‘value’ in her opinion your defending? If so, please explain to me how this serves our community. I can’t help but think our community is a little smaller exactly because there were those who did not care to be addressed in such an angry and disrespectful manner. Call her a troll or not, the effect is the same.

I just want to go on record and say I am against implementing downvotes. I think flagging and moderation are sufficient.

I’m not sure I’m comfortable with us talking about somebody else publicly like this in a thread they’re not part of and where they’re unable to defend themselves.

Perhaps this should be private, and that chance should be given (in a civilized way)

Well you can easily filter the topic down to just posts by that user. To do this, click any avatar in the topic map at the top of the page:

Expand the topic map to see the complete “cast of characters” for a topic. Click multiple times to filter to multiple users. It’s easy. AND FUN, DAMN IT.

I’m not sure I’m comfortable with us talking about somebody else publicly like this in a thread they’re not part of and where they’re unable to defend themselves.

The proper way to do this is frame the discussion in terms of the general pattern of behavior, that could apply to anybody:

Already exists – you could certainly do the following: 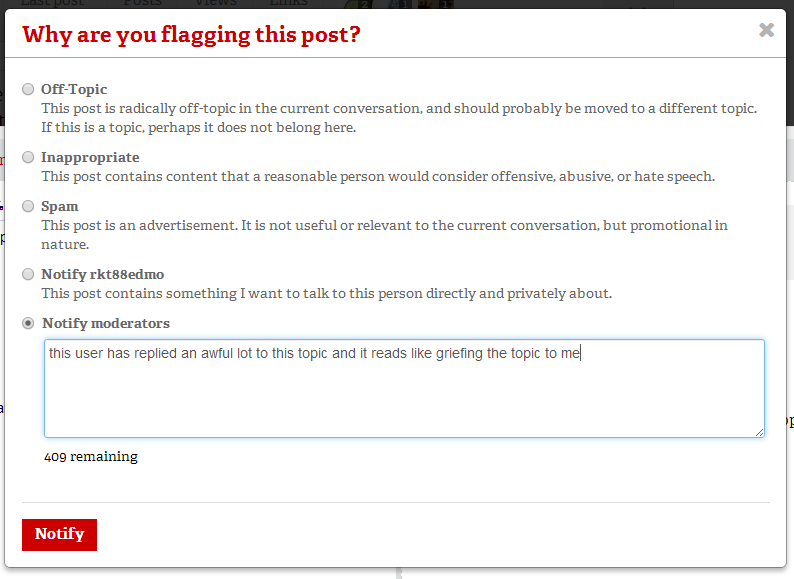 You could also mention if the user has a history on this particular topic, with URLs for examples, etc.

Expand the topic map to see the complete “cast of characters” for a topic. Click multiple times to filter to multiple users. It’s easy. AND FUN, DAMN IT.

I mean, you got better from this point onward, but you already had me here.

I am blocked by a fellow neighborhood activist on Facebook. She has blocked many people. So now there are two conversations going on at any time on our “forum” on the same thread that some can see all of, and two other groups see some of from two different perspectives. This has actually lead to mis-understandings about concrete issues. It is almost invisible, though. What is going on. So, I say just scroll past stuff that annoys you. You wouldn’t ask for someone to be kicked out of a party because you thought they were over-bearing. You would just move away from them. Stop responding.

Sometimes I’ve wanted the ability to downvote the odd post, but I can imagine why it’d be a bad thing…

What I’d really like to see is a thumbs-up icon for ‘like’, and the current icon standing for ‘love’.

This is super helpful, I can see how to look at posts only by certain users, couldn’t quite figure out how to make it do:
-reset to see all after having filtered (I just edited the url, but seems like you should be able to unfilter as well?)
-filter to exclude certain users rather filter to only see them?

I didn’t flag because I don’t think the posts fall under inappropriate or spam, and don’t think the mods need to be bothered with it, but was curious because having a mechanism to self modulate who you see or don’t see isn’t uncommon.

I TOTALLY do not get credit for that term, that’s all Mr. Wong from Cracked (the same guy who wrote ‘John Dies at the End’ and ‘This Book Is Full of Spiders: Seriously, Dude, Don’t Touch It’). It was a moment of hilarious, brilliant zen over there, and kind of mind blowing and scientifically useful too!

Not really to be a thread intended to discuss them, but rather how the Discourse SW works. I probably could have left out the example, but I still think it is illustrative. I definitely don’t want to start a meta-thread about someone in particular.

And if I do I it’ll be appropriately titled

Once again - Very Helpful! Thanks!

Too bad it doesn’t indicate on the toolbar which users you are viewing, or allow you to neg and subtract a certain user from the conversation, which is the ignore function I think I am looking for.

So we must conclude that…

Speak for yourself please. Claiming the voice of the group is slightly more offensive to me than calling me a name.

I believe there was a time when users were given time outs.