If the process is that open to tampering, I would be surprised if there was a lot of down-ballot tampering: Hit a few machines in a county to rig a few choice races.

Check your history books, the Democratic party’s no slouch at vote rigging.

Since the early 1980s or thereabouts, Republicans appear to have been more technically competent than the Dems at voter suppression, gerrymandering, and rigging vote counts.

I’m not going to claim it’s never happened with Democrats (I know about ACORN and Kerry’s campaign slashing tires, at least), but to the best of my knowledge, Republicans are the only ones laser-targeting minorities and the poor by researching when and where they vote and then passing legislation to prevent it from happening again (for example, outlawing early voting, closing DMV offices, outlawing elections on weekends, making gun licenses a valid form of photo ID but not state employee IDs or student IDs, etc.), as well as putting up billboards or making robocalls reminding them to vote the day after the election, telling them their candidate had already won, and other misdirection.

The parts of this that aren’t outright illegal are supposedly done in the name of preventing voter fraud, but there’s so little evidence of voter fraud actually being a real, existing problem that it’s a pretty transparent disguise- so transparent that they often don’t bother to keep pretending, and have on numerous occasions let it slip that it’s really about nothing more than winning elections by preventing their opponents from having the ability to vote. If Democrats are doing anything even remotely approaching this level of scumbaggery, I’d very much like to know.

Living in Georgia and currently working in state government myself, I face palm. It is possible that someone ordered the server to be wiped…because… It’s also just as possible that the it was compounded human stupidity. I don’t think the tech(s) who did the actual wipe are to blame. They were just doing what they were told to do (and they are probably a contractor rather than an actual state employee). Or Ernie, or whatever the scapegoat’s name is, was just doing what he’s supposed to be doing and going through the list of servers to be upgraded, fixed, retired, whatever and that server was on the list. But then again, there has been a continuous stream of headline stories here about corruption in the state and county governments.

Or Ernie, or whatever the scapegoat’s name is, was just doing what he’s supposed to be doing and going through the list of servers to be upgraded, fixed, retired, whatever and that server was on the list.

Bingo. Chris wiped the drive on orders from Stephen, at the Center for Election Systems at Kennesaw State. Ars has more details and good links: 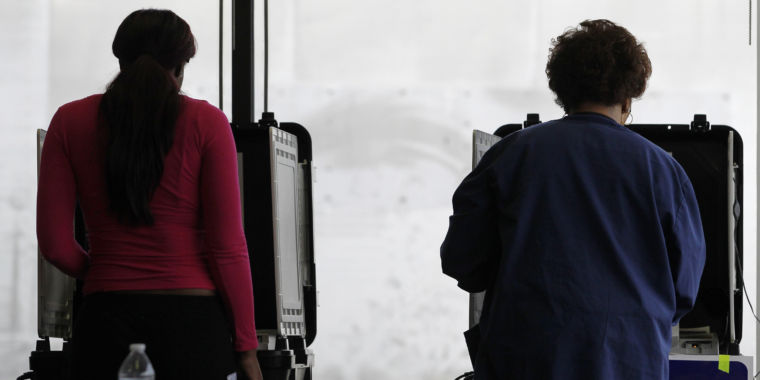 Like I said, the Republicans are more competent at chicanery today.

Democrats seems to be bumbling around trying to manipulate the vote in states they are already going to win anyway, while Republicans, as you say, laser-target their key opposition.

But that hasn’t always been the case; the Chicago Graveyard Vote is legendary, as is Tammany Hall*. And I’ve personally witnessed how the Democratic machine operates in Philadelphia; political bosses determine the outcome of votes.

* BTW an interesting article from Keven Baker over at New Republic seems to be calling for a renewal of highly effective vote corruption by the Democratic Party, he uses Tammany as a model for success.

in modern history i would submit the primary between clinton and sanders.

reduced polling locations in areas with strong sanders support ( leading to lines that were hours long ); changing meeting times for delegates without prior notification; i’m sure the list is longer – but that’s two i remember from off the top of my head.

the democrats are only “your friends” because they are to the left of republicans on social issues. as a party, they themselves do not always play by the rules.

they are no more likely to support things like independent commissions to draw district lines, proportional delegate allocation for presidential runs, ranked choice voting, or a federal holiday on voting day because it would hurt them in areas where their party is strong – even if it might help the voters in the long term.

in modern history i would submit the primary between clinton and sanders.

reduced polling locations in areas with strong sanders support ( leading to lines that were hours long ); changing meeting times for delegates without prior notification; i’m sure the list is longer – but that’s two i remember from off the top of my head.

When I see a news headline about Georgia that doesn’t provide the appropriate context, I make a guess before reading the article about whether we’re talking about the US state or the small country.

I got this one wrong, though I feel like I should have got it right.

I believe the overall idea is that both sides are supposed to play fair in this day and age. What has been done previously should be regarded as a cautionary tale and ‘never again’, not as ‘Hold my beer and watch this’.