I was downtown when it started snowing and it took me 30 minutes to get out of my parking deck (I was parked on the 2nd floor), and another 2 or so hours to get home. But I count myself lucky, as some people were stuck for 3, 4, or more hours, especially on the north west side (Marietta, etc)… how are the rest of you southern bound fairing in the weather…? Did you get your bread and milk?

Also, someone posted this on Gawker in the comments where they were talking about the milk and break phenomenon and I nearly died laughing. 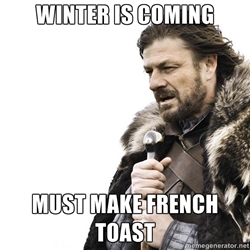 I’m fine. The weather held back until about an hour after I got home. Everyone else–like everyone else–in my region got to go home earlier than I did so even if we’d had weather, the roads were nigh abandoned.

Only concern on this end is whether the power will hold out. If we weren’t famous for shutting down due to a centimeter of snow (which wasn’t the real reason we shut down that time anyway), we’d be famous for losing power every time snow winks at us.

Once it started snowing, after I put the Sysco order into the walk-in cooler, they sent me home. rode my bike up Edgewood about a half mile and home, no worries, but the snowflakes kept flying into my eyes, I didn’t think to put a hat with a brim on. Took my dog out, pulled a beer box out of a dumpster and made a sled out of it, had a few runs before it got dark.

Our buddy Craig was stuck up in Roswell. His job sent him home, but traffic was so fucked it took him an hour to get like a half mile. So he pulled over at Sandy Springs, left his car, and took Marta over to our house since we’re right by a Marta station. So, we’ve been TV partying it up since then.

the snowflakes kept flying into my eyes, I didn’t think to put a hat with a brim on.

I’ve never been much of a hat-wearer (my head’s usually too big for the vast majority of hats… swollen with arrogance, no doubt), but as a bespectacled man, I truly hate it when raindrops speckle my specs, and I am obliged to don a wide-brimmed chapeau when it does rain. Which I hate, since it’s too damned tight.

But as we’re in a drought out here in L.A., the issue hasn’t arisen in too long. Stay warm and safe and dry out there, my friends.

My cousin is visiting her dad in Cali and says it was 70 yesterday… jealous. Except not really, cause I kind of like cold weather. Though I think I need a new coat. I want a pea coat, I think.

You guys… this is fucked up you guys:

As much as four inches of snow fell over parts of the South today, leaving a wake of destruction in its path — thousands of flights were canceled, Georgia is currently in a state of emergency, and students are stranded in schools across multiple...

Insane Crash Footage From the Snowpocalypse in Atlanta

Yesterday afternoon, a relatively mild snow storm hit an unprepared Atlanta. UPDATE: This is a video is from a crash last year. Original post below:

For the footage from the second link, anyone know where that crash is? It looks north of the perimeter and I know there were some spots on I-75 north that WABE was saying was impassable. He goes by a road sign, but it’s too fast and I can’t see what exit it is.

The snow is no problem, the (thankfully rare) ice storms I experienced when we lived in NC were some of the most apocalyptic conditions I’ve ever lived through:

It was bad. Real bad. You just don’t appreciate how hard a world without running water and electricity for even a few days can be.

It’s like the situation in Egypt when it snowed: the homes (and especially the pipes) don’t have insulation, people don’t own winter coats and boots, and electricity becomes crucial to power all the extra tools needed to handle the cold and snow (heaters, snowblowers, etc.) and thus the grid becomes overloaded.

I was in Cairo once in early March, having come from near-0ºF temps in Chicago, and the locals were horrified at the thought of me swimming in an outdoor pool. It’s 68ºF…you’ll freeze to death! Snow survival is a real issue for people in such climates.

second link has an update that says this is from last year? don’t remember a thing.

Yeah, I saw that later… me neither, though. It seems like a wreck that bad would have gotten days of coverage if it was anywhere near ATL. Maybe it was too far north or south of the city to have made any meaningful impact?

I bet it was from several years ago, the “Snowpocalypse”

here’s my dog that year. it’s my best pic of her 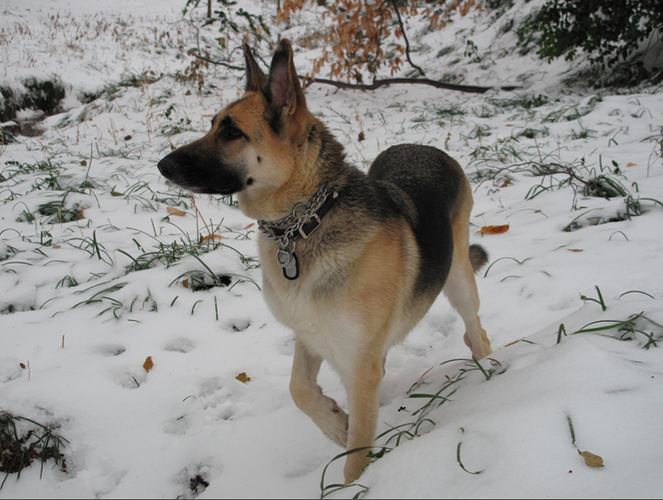 Imagine your dog with no black on the muzzle and floppy ears…that’s mine!

well, here we go with round two.

this freezing rain has well fucked the roads, if the alley in my apt bldg is any indication. but what it has done to the snow is really pretty; like sculpting, an eroded stone kind of look. the channel where the water drains down the hill was frozen translucent and you could see the water flowing underneath. pretty neat.

We have ice everywhere out our way (east of the city). We did lose power for a couple of hours this morning, but we’re fine now. Looks like none of this will really clear up until Friday–it’s supposed to ice until tonight and then snow for until Thursday afternoon.

Try not to get cabin fever!

my biggest inconvenience today is that Album 88’s transmitter is down: static

WHAT??? NOOOOOOO!!! They better have it back up by Friday… I can’t live without my weekly dose of One Step Beyond/I Don’t Care/Dot Dash!!!

ha, nah it’s back on today. your shows are safe, unless they have a fucking basketball–or these days, football

I miss Kimberdoo hosting One Step, and the Saturday morning kids show she did.

Oh good. One Step Beyond is an amazing show and I’m glad it continues with new DJs. I sort of like the line up for the DJs on fridays now. Although for some reason the regular dj for Dot Dash, Ana, I keep imaging as Aubrey Plaza.

That’s the sad thing about WRAS… shows and djs come and go. I miss Dead Air (and Michael and Brian) and Nippon Music Champ (with the B-Chan)… I just dated myself in the case of Dead Air. I keep thinking I’ll go apply to DJ, but I have no time to commit to doing it, sadly. And I probably will only be around for a couple more years anyway.

I could see that.

I can’t get a good mental sense of this show since, when I did radio at UTK, that was the name of the hippie jam band show, so the 88.5 show’s name doesn’t get past that filter. is that the drone show?

I knew Nikki and Marcel (another great host–I’m not sure you listened to The Bomb/New School Hour, though?) and some of the other DJs since I was one of the monthly mix DJs for the Hush-Hush show, when that was an actual mix show (as in beat-matching records.) My homeboy Conspiracy (whose old apt I now live in) originated the Theoretical Abstract show, but it sucked after the next host took it over. I used to know Adam Bomb who originated the Soul Kitchen show and ended up being station manager or something. There’s still a station ID with his voice on it, it’s like hearing a ghost. Definitely the worst part of college radio, I agree.

I figured you for Emory, somehow.