[SPOILER] returns to Doctor Who

Originally published at: [SPOILER] returns to Doctor Who | Boing Boing

As a heretic who ranks Tennant at the bottom of the “Nu-Who” era Doctors (yes, even below Whittaker), I was not entirely thrilled about this. But given that Doctor Who is still my favourite tv show*, I do look forward to seeing what Davies has planned.

*although I often note that I can’t be a “fan” of the show because I actually like it.

Hmmm…
I like David Tennant as an actor, and I enjoyed his time as the Doctor. However:

No doubt many are considerably frustrated with the departure from tradition in that he didn’t regenerate while keeping 13th’s wardrobe.

It was a fun sendoff for 13. The plot was a little all over the place, but thought it held together better than the recent Flux and Sea Devil outings. As a fan of the original series it was wonderful to see so many characters I loved as kid reprise their roles. Loved that 8 got some more screen time–he’s become a favorite for me due to his excellent audio adventures. Hands down the biggest shock for me was Ian’s return! Would have liked to see what Russell T Davies would have done with 13, but looking forward to the adventures of the 10/14thish Doctor next year.

So wait, Gallefreyans can regenerate into former incarnations? That seems… awfully new and made up to the established canon

His clothes also changed, which i think means something is very wrong with that regeneration. They also didn’t seem to fit him very well.

But I actually thought it was a little disrespectful to both Whittaker and Gatwa to do this. Tennant is a fan favorite, and Whittaker’s run was … controversial. It was like they were saying “don’t worry, here’s your favorite to make it aaaallll better” between the two big casting changes.

Edit: while I’m here, i realized last night that we may never see Jo Martin’s Fugitive Doctor again and she was really good. I love Jodie Whittaker but I liked Martin’s energy a LOT and want to see more of it. Seems like a waste of the actor and character now.

The clothes used to change, but that was before NuWho.

I thought Whittaker did a decent job but was given brutally bad scripts from someone that had no idea who they were writing for. Most episodes had the doctor following someone else, rather than leading.

I have to think the main reason Tennant returned is ratings have plummeted. 11 had Tom Baker show up and mention that he could regenerate into old versions, so this is the payoff of that. Hopefully they can use good writing and storytelling to bring the series back. There’s a lot of 13’s run, Timeless Child and Flux most of all, that I’d love to see retconned away somehow because it was just written so very poorly.

I noticed that too

That seems… awfully new and made up to the established canon

All the established canon was once new and made up. The whole regeneration thing wasn’t canon before the William Hartnell wasn’t going to continue and they didn’t want to just end a hit show.

I knew something big was going to happen at the end of the episode and since I couldn’t watch it live I avoided twitter, etc. until I would watch it on monday evening… only to be spoiled by the BBC’s own news bulletin as my radio woke me up in the morning

I’m not a huge spoiler-phobe but I mean, give us a little leeway. It’s not like time shifted viewers are a tiny minority these days

Gatwa is still going to be the next Doctor, after three specials with Tennant, which have all already been filmed. (The late Bernard Cribbens will make his last appearance as Wilfred.) Or at least that’s the claim right now.

So wait, Gallefreyans can regenerate into former incarnations?

Yes, I suspect the explanation will be something along the lines that process of reverting back to 13 from the master (maybe) coupled with the cause of “death” made something different happen.

As far as real world production reasons I’m guessing it was either because they wanted the reveal of Tennant in his full look to have maximum impact and/or didn’t want that outfit hand off because he’s not really the 14th incarnation, Gatwa is, and we’ll find out what is going on in the specials next year.

So wait, Gallefreyans can regenerate into former incarnations? That seems… awfully new and made up to the established canon

That seems… awfully new and made up to the established canon (although please, someone correct me if I’m wrong on this point, I’m not going to pretend I’m an expert in Who lore).

They basically do that all the time.

At one point there was limit of 12 regenerations before a Time Lord would die die. And some fans were irked when this cannon changed.

I suspect this will be some sort of “time echo” - an unstable regeneration that will last an episode or 3 while he glitches before regenerating into the new actor. (That is my prediction - let’s see how it pans out.)

I still need to see the last couple seasons. I don’t have an easy way to stream, so I have to go pirate and I am lazy. 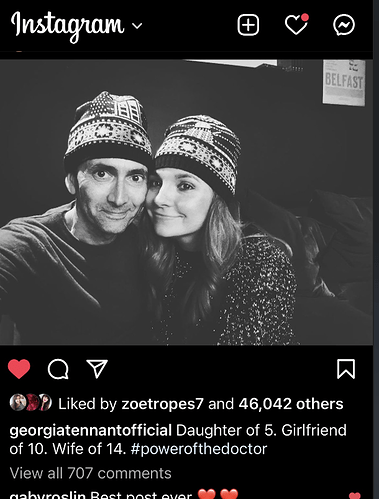 At one point there was limit of 12 regenerations before a Time Lord would die die.

And now The Doctor isn’t quite a Time Lord.