Recommended reading by a BB favourite. 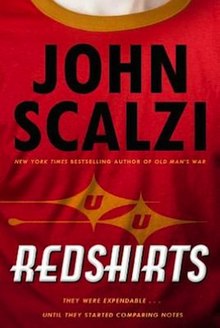 Redshirts (originally titled Redshirts: A Novel with Three Codas) is a space adventure by science fiction writer John Scalzi that capitalizes on tropes from Star Trek and similar television series. The book was published by Tor Books in June 2012. The audiobook of the novel is narrated by Wil Wheaton. The book won the 2013 Hugo Award for Best Novel and Locus Award for Best Science Fiction Novel. In the prologue, several senior officers of the Intrepid, flagship of the Universal Union, lament the...

there’s a good chance they be did within the hour

Arr, me hearties, they be did, alright. They be deadshirts!

You might like a reading of a story in the Redshirts universe performed by John Scalzi and Wil Wheaton. About 5 minutes in John had to cover his face lest he burst out laughing, I think. Wil must have prepared well to keep a straight face during that section.

From somewhere else on the internet, paraphrasing: “this is how you know Scotty is one tough SOB, he’s the only guy in a red shirt still alive”

“Scotty” was engineering, not security.

James Doohan on the other hand…

At the beginning of World War II, Doohan joined the Royal Canadian Artillery and was a member of the 14th (Midland) Field Battery, 2nd Canadian Infantry Division.[9] He was commissioned a Lieutenant in the 14th Field Artillery Regiment of the 3rd Canadian Infantry Division. He was sent to England in 1940 for training. He first saw combat landing at Juno Beach on D-Day. Shooting two snipers, Doohan led his men to higher ground through a field of anti-tank mines, where they took defensive positions for the night. Crossing between command posts at 23:30 that night, Doohan was hit by six rounds fired from a Bren gun by a nervous Canadian sentry:[2] four in his leg, one in the chest, and one through his right middle finger. The bullet to his chest was stopped by a silver cigarette case given to him by his brother.[7] His right middle finger had to be amputated, something he would conceal on-screen during most of his career as an actor.[10]

Doohan graduated from Air Observation Pilot Course 40 with eleven other Canadian artillery officers[11] and flew Taylorcraft Auster Mark V aircraft for 666 (AOP) Squadron, RCAF as a Royal Canadian Artillery officer in support of 1st Army Group Royal Canadian Artillery. All three Canadian (AOP) RCAF squadrons were crewed by artillery officer-pilots and accompanied by non-commissioned RCA and RCAF personnel serving as observers.[12][13] Although he was never actually a member of the Royal Canadian Air Force, Doohan was once labelled the “craziest pilot in the Canadian Air Force”. In the late spring of 1945, on Salisbury Plain north of RAF Andover, he slalomed a plane between telegraph poles “to prove it could be done”, earning himself a serious reprimand. (Various accounts cite the plane as a Hurricane or a jet trainer; however, it was a Auster Mark IV.)[14][15]