Start this siphon with a hand pump

Nothing ruins the day like a mouthful of gasoline… Never doing that again.

Great, now i can empty people’s gas tanks with ease!

Starting a siphon sometimes meant a mouthful of some liquid I’d prefer not to sample.

That’s never been the way you’re supposed to start a siphon. Its a stupid idea that movies have reinforced as the default way to do it. You fill the line partially with water or really any other liquid that’s to hand. Insert the empty end of it into whatever you’re trying to drain (while keeping the filled end carefully below the level of that vessel so you don’t dump the water into it). Then let the water drain out of the line. It’ll pull the remaining air through the hose along with it, drawing whatever liquid you’re looking to move up into the hose, and getting it flowing. You just need enough tubing, and enough water to get the target liquid up over the crest of the hose and gravity takes care of the rest.

These pump guys are easier and less messy though. My grandfather once built one from what turned out to be some sort of manual fuel pump used with WWII era fighter panes. My father used it to drain his pool.

No thanks, I just ate.

Personally I prefer to huff it from a bag, less chance of accidental ignition.

Starting a siphon sometimes meant a mouthful of some liquid I’d prefer not to sample.

…or, how I figured out that my water turtles probably don’t have salmonella.
(Perhaps all the gasoline from my youth made me impervious?)

This is the perfect gift for your teenager whom you’ve given a car. It’ll save you big bucks on gas! Just remember to keep your own car locked in the garage. And maybe start a bail fund.

I can’t remember who told me the story any more, but they had someone in a previous neighborhood they lived in that would routinely siphon gas from people’s gas tanks. And whenever someone would buy a cap that locked he’d just use a handheld dremmel to cut through it.

Listen to an expert, Jason, he’ll explain it:

I regularly have to use a siphon to empty temperature-controlled water baths- I tend to use a 20mL syringe to draw water up into the line to start it. I may try your idea next time though.

I just push the hose down into the tank being drained until it’s got enough liquid in it, put my thumb over the open end, pull it back out far enough to reach the jug on the ground, and let my thumb off.

If you use a squirrely plastic hose you found on the side of the road, that wants to curl itself up into a ball, the end might keep curling up out of the liquid, causing you to curse colorfully and fail repeatedly until finally you end up mouth-siphoning it anyway. Don’t ask me how I know. Maybe I should get one of these things.

there’s an even more elegant solution to a “self-starting” siphon which I’ve used often to move gas from a spare tank to my car (you jab the one-way valve end into the liquid until it fills up enough to flow on its own): 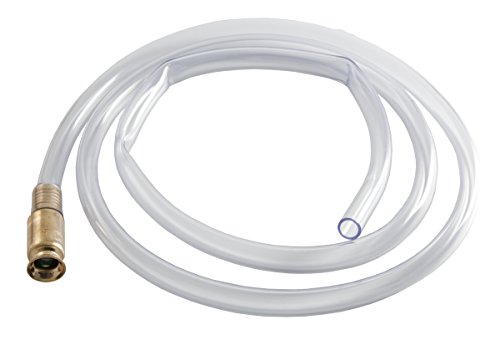 FloTool, by Hopkins Manufacturing, offers the most comprehensive and highest quality offering of fluid handling products. Driven by innovative, no-mess product solutions, whether you’re changing your ...

This is new? I’ve had a similar siphon for maybe 20 years, got it from a dollar store.

Did yours come from an affiliate link? Probably not