Our prepublished protocol, consented to by each police department, stated that officers on “camera on” shifts had to keep the camera on during their entire shift (typically between 8 and 12 hr) and inform members of the public, during any encounter, that they were wearing a camera that was recording their interaction (e.g., see Supplementary Materials in Ariel et al., 2016a). As discussed above, the intervention consisted of both camera and notification (on the importance of the interaction between these elements, see Ariel, 2016c; Sutherland & Ariel, 2014). To be clear, the trial design meant that officers were not able to exercise any personal discretion in deciding when cameras were turned on; cameras were on throughout their shift, during every interaction with members of the public.

Interestingly, the police here (Ireland) are actually asking for cameras.

Middle ranking Gardaí are calling on the Minister for Justice to provide them with body cameras.
The Association of Garda Sergeants and Inspectors says officers on the beat need the personal miniature cameras for their own protection, and to collect evidence.
The organisation passed a motion at their conference in Westport last evening, saying the devices would also cut down on the number of spurious allegations made against Gardaí.

Perhaps these interestingly named “Gardaí” police are seeing the potential to weed out much more corruption with always on body cameras.

I mean, there must be cops who don’t see the public as their enemy.
Somewhere.

So what this means is that cameras actually protect both sides.
The police I have met in the UK have been uniformly reasonable -even the one who stopped me on my bike once, but it turned out he wanted to know where I got my Velocette spares.
But yes, white.

i would imagine that it would be because in the u.s. there is no standard for how to use body cameras. in many, if not most, localities the officer has control over whether the camera is running and so many times the unarmed black man is dead before they turn on the camera. police here is the u.s. also seem to be under no compulsion to tell the public they interact with that the police officer is wearing a switched-on body camera.

That is very promising.

Distressingly, some things appear to be universal.: http://www.irishexaminer.com/ireland/senior-gardai-tried-to-destroy-source-424048.html

Universal indeed - as they say, power corrupts. I can only take heart in the fact it’s other officers providing evidence against them.

Of course they do. When perps and thugs know that they’re being filmed they hardly ever lodge false complaints about the police fatally shooting or choking them to death.

I know it’s a popular time to take pot shots at the police, but we should all acknowledge (in the context of how body cameras are beneficial to both sides) that people interacting with the police are often not very reasonable either and are often filing false statements or other complaints of that nature. This is an important point to keep vocal about when the ‘rah rah police’ folks start yelling about bodycams.

The officer said she had an open container. She was arrested and spent the night in jail. Thanks to body camera footage and a smart attorney, it turned out the container was nowhere near her and the officer was just making things up because he didn’t like her attitude. Charges dropped. No word on what happened to the officer. 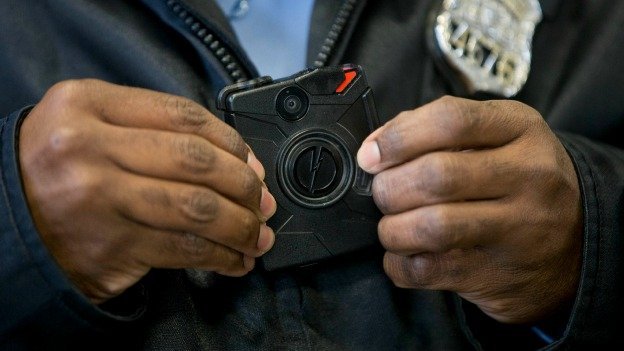 Police Said She Had An Open Container. Her Lawyer Asked For Body Camera Video. |...

Body-worn cameras often make the news when the news is bad: a police officer shoots someone, or there's a particularly dramatic chase. But footage from the cameras is now making its way into even minor criminal cases.

Our prepublished protocol, consented to by each police department, stated that officers on “camera on” shifts had to keep the camera on during their entire shift (typically between 8 and 12 hr) and inform members of the public, during any encounter, that they were wearing a camera that was recording their interaction

The US needs that as a universal standard, at the very least

Cameras are important because accountability is important. But they are not the end-all be-all answer to the many issues we face. Cameras do add accountability, and that is critical. This study seems to show that - convincingly.

Too good to be true, imo.

If you want real reform, remove police officers’ right to kill anyone, ever, period. Courts are there to adjudicate law, and officers are there to bring offenders to courts, period.

Several reasons: With the camera on all the time, it can’t be used selectively record interactions in favor of the police. (Or this sort of thing: http://boingboing.net/2016/09/20/police-accidentally-record-the.html) Also, one could easily imagine that making the statement about the recording reminds both parties that their actions may be subject to outside scrutiny.

Or to put it another way, saying “if you wear body cams it will drastically reduce bogus complaints” might be a good way to sell cameras to police forces, because yes, members of the public are arseholes some of the time.

So let’s take this shit all the way then - how would you suggest handling two armed gunmen in a mall?

With national guardsmen. People who are trained really well to de-escalate situations and are highly proficient at safe weapons handling.