What’s funny is that probably most people are capable of doing all those things. Just very badly.

I know I can do 2 or 3 well, about half very badly, and the rest I’d probably be stopped in the act by someone morally compelled to end the carnage.

Bombs always have a helpful red “on” light, even if they are supposed to be clandestine - usually blinking. All timers show the real time a bomb will go off. And cutting the right wire makes the electronic clock display stop, rather than merely disconnecting the detonator, or powering the timer off entirely.

Here’s a trope that gets to me partially because I’m an engineer who would be helpless if I was handed a slide rule rather than a calculator:

Person travels back in time and/or to a less technological culture, and, using his advanced knowledge of modern technology and science, is immediately able to vastly improve upon whatever technology is available and use it in ways that seem almost magical to the locals.

Some examples, of which there are many:

Someone who actually got it RIGHT was Douglas Adams. From one of the Hitchhiker’s Guide books: "He had been extremely chastened to realize that although he originally came from a world which had cars and computers and ballet and Armagnac, he didn’t, by himself, know how any of it worked. He couldn’t do it. Left to his own devices he couldn’t build a toaster. "

The further we move into the future, the more obvious it should be just how wrong this trope is. Could a typical kid who grew up using an iPhone be expected to be able to expertly operate a DOS-based computer better than someone who used it daily?

Person travels back in time and/or to a less technological culture, and, using his advanced knowledge of modern technology and science, is immediately able to vastly improve upon whatever technology is available and use it in ways that seem almost magical to the locals.

I wouldn’t be able to so much as invent the paper clip, because the invention of the paperclip wasn’t just about the shape of the clip it about the supply chains, metalalurgy and manufactoring machines that made them cost effectively. Same with safety pins. And staplers. Heck I don’t even think I’d be able to sell clean water is an idea for health. Or anti-sepsis. I’d need a microscope to prove it and most people wouldn’t believe me. And don’t know how to build a microscope.

You ever see that STNG episode where Data had amnesia but was still able to invent the whole concept of “the scientific method,” build a microscope, and cure radiation sickness in like 2 days? 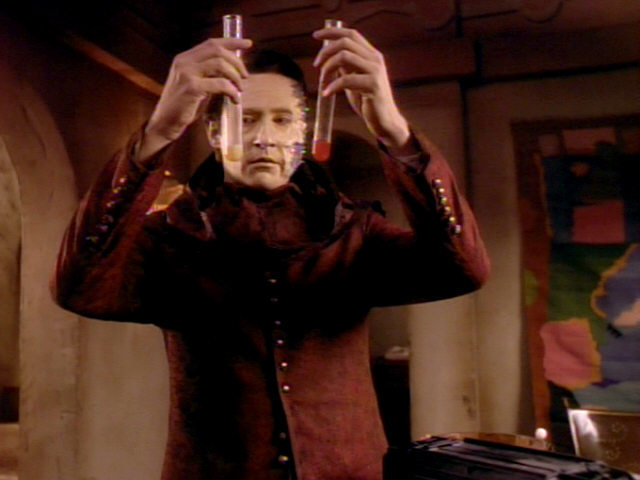 But he’s a robot so whatever.

Some Space Opera shows gave lip service to “translator medallions” or such, but most simply have everyone in the galaxy speaking perfect english. SG-1 gave lip service to the language problem at first, then said fuckit, everyone speaks english, but all the written stuff is in them foreign tongues that the good Dr Jackson has to translate.

Why are artificial intelligences considered incomplete in most literature until the human teaches them how to love? And barring that, why are the ones that never learned to love always so omnicidal?

Dunno, but fortunately you can always get them to go into a logic loop and explode if you’re Captain Kirk. 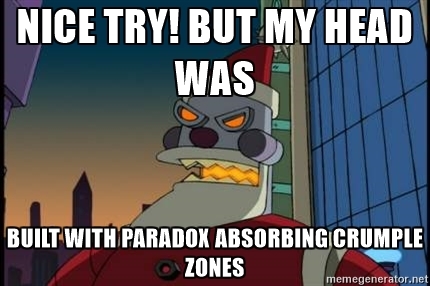 It is ironic to me that love is considered the apotheosis of humanity whether were talking about upliftinging vampires or intelligent robots, or what not. Love is actually one of our more primitive brain functions and not one the more advanced processes that came later in our evolution. What we inherited from our more recent ancestors is the ability to rationalize love as being an intellectual persuit rather than the gut level chemical attraction that it is.

Aliens with the technology, energy and resources to cross the galaxy within two decades… or even just open and keep open a wormhole big enough for an invasion fleet… arrive to steal our resources instead of just mining the much more plentiful resources in the rest of the solar system and not waste what they gained on a costly war.

In the “Starship” series by Mike Resnick, aliens secretly infiltrated an inhabited planet to steal its volcano energy. Yes, they came in interstellar space ships across the galaxy, past stars that are millions of degrees hot to surreptitiously steal thermal energy from some volcanoes.

Talented as he is, space opera is really beyond Resnick’s skill set.

The man can shred your feelings into chaff then re-spin them into golden fleece. He’s a master of emotional manipulation in the best way, but yeah, hard SF is not his strong suit.

Universal: knocking people out by hitting him on the head without causing skull fracures, brain damage or death is easy. Even if you have to hit them a few times to make it happen.

Have you ever seen someone choke on food a long time? It can go on for minutes if nobody helps.

Knockout gas. All those Hardy Boys books full of knockout gas. Which just doesn’t exist. And when they try to fudge some up IRL they end up killing a whole theater full of people. The Moscow theater hostage crisis (also known as the 2002 Nord-Ost siege) was the seizure of a crowded Dubrovka Theater by 40 to 50 armed Chechens on 23 October 2002 that involved 850 hostages and ended with the death of at least 170 people. The attackers, led by Movsar Barayev, claimed allegiance to the Islamist separatist movement in Chechnya. They demanded the withdrawal of Russian forces from Chechnya and an end to the Second Chechen War. Due to the layout of the theater, special forces would...

Trope: Semi-automatic pistols are unloaded if you take the magazine out.

I don’t see this one as often in TV or film as I do in books - maybe that’s because of firearms consultants or something - but it’s still pretty common. In reality just removing the mag still leaves the gun loaded if a round is already chambered. With 300 million guns in the hands of private owners in the US everybody should know this.