Well, they could just make him darker and edgier. I hear that’s all the rage these days. /s

If Marvel can make Captain America resonant with the public - their own version of truth, justice, and the American way - DC can do the same with their embodiment of those ideals. That they won’t is a reminder that capitalism holds control over the very symbols designed to disrupt the evil it inflicts upon society.

Able to leap tall buildings in a single bound…

100% this. MCU’s Captain America has been a perfect model of how Superman could be done without having to compromise the basic principles.

Well, you have a corrupt industry, and a figure that stands for incorruptibility – the whole “Truth, Justice…” thing. Of course the movie industry executives don’t know what to do with him, he’s antithetical to their entire existence!

Man, the Fleischer cartoons were soooo freaking good then - and today!

So Superman… he has the problem that a lot of DC characters have. They are more akin to Greek Gods or demi-gods. It is pretty ridiculous that Superman was out there bonking gangsters on the head and grabbing them by their shirt collars and dropping them off at the jail. It is like using a Tank to enforce a parking ticket.

Green Lantern had a similar issue, but eventually he met more and more cosmic threats.

I think that is why Marvel is overall more popular, their characters are, for the most part, more grounded. While you have a few that are too powerful, even they tend to have weaknesses to exploit. And why Batman is DCs most popular character, as he is the most grounded.

I know in other media they have explored the Superman Archtype and how horrible it would be. Homelander in The Boys, for an example. I believe Invincible is about this too, but I have yet to read/watch that. (I really need to catch up on my media.)

DC’s problem for a decade or two is that their most popular movies have been grimdark Batman movies, and so they think grimdark is the only way to make a superhero movie. Yes, Marvel’s movies have humor and a willingness to embrace at least some of the cheese that comes with classic superhero tropes – but DC can’t see past grimdark. *

*I mean, other than Wonder Woman, Aquaman, Shazam, which did a decent job of escaping from the grimdark Snyder gravity well. I don’t know why the movie studio side of the business can’t seem to connect this strategy to Superman…

Production-wise, Fleischer’s cartoons are superior. Being products of their time, though, episodes such as “Japoteurs” and “Jungle Drums” are, for me, turnoffs.

Invincible is more about General Zod than Superman, and what might cause him to become de-Zod-ed.

One of the things I always liked about Max Fleischer-era Superman is that when he was lifting a building or pushing a locomotive around or whatever you could see that he was putting physical effort into the task. Like “yeah, he’s super-strong but he’s still getting a workout saving all those folks.”

I’ve been “working on” a couple of video game projects over the years based exclusively on the idea of this, and inspired by these Fleischer Supermans. One, an open-world (2D) superhero game, the other a sword and sheild fighter inspired by the final battle of sleeping beauty (as well as the descriptions of multi-day battles to exhaustion like Trina Schart Hyman’s St. George and the Dragon). Of course no coincidemce the source material for both are lovingly rotoscoped…

True. I am not even sure I have seen those two specific episodes.

ETA not sure why BB shrunk this down so far. 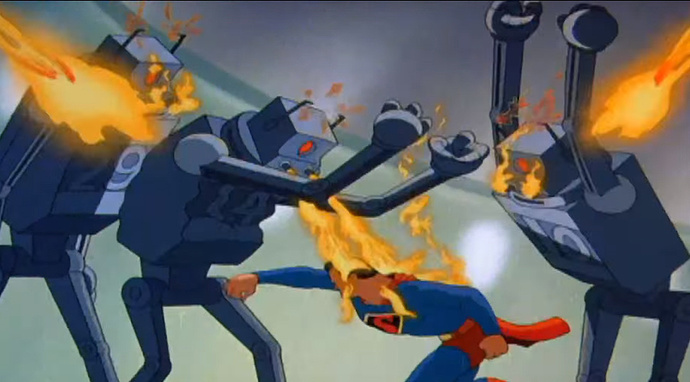 Production -wise, Fleischer’s cartoons are superior. Being products of their time, though, episodes such as “Japoteurs” and “Jungle Drums” are, for me, turnoffs.

The first eight episodes were made by Fleisher studios. Then Paramount seized control after the Fleischers left in 1942, renamed the studio “Famous Studios,” and produced additional episodes including the two you mentioned. So you can go on liking the original Fleischer films.

What’s the difference between the SuperFriends headquarters and Superman’s Fortress of Solitude?

One is the Hall of Justice and the other is a hall of just ice.

The problem with the current Superman for me is the Zack Snyder abomination. Changing his costume into a blue onesie is just so wrong. He needs the red trunks to break up the line of the tights. And don’t get me started on the homeless guy look of Superman and Lois. Hopefully, the animated versions won’t be adopting that!

Good to see someone who knows their animation history of Fleischer studios.

The current Superman TV show on the CW is actually good though—Tyler Hoechlin manages to play Clark Kent and Superman as one person, with one personality, a shy pencil-necked geek and an alien demigod at the same time, like it’s no big deal 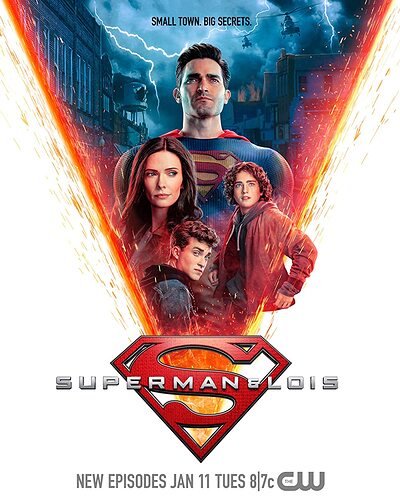 I think the blue onesie is from the “new 52” reboot in the comics and predates the Zack Snyder movie. Quite controversial.

I think the blue onesie is from the “new 52” reboot

Also when Superman’s outfit got a new collar and sleeve cuffs that would be impossible to hide under a dress shirt and tie.