Why didn't Captain America have a cartoon in the 90s?

Originally published at: Why didn't Captain America have a cartoon in the 90s? | Boing Boing

In the real world, Before the Marvel cinematic universe, Captain America was a d-list superhero- unless you were from the 40s like Steve Rogers.

Still waiting for the 1979 version of Cap to make his appearance in the Multiverse.

Before the Marvel cinematic universe, Captain America was a d-list superhero- unless you were from the 40s like Steve Rogers.

Or if you read comics. Cap has scarcely, if at all, been absent from comics since his reintroduction in Avengers #4 in 1964. 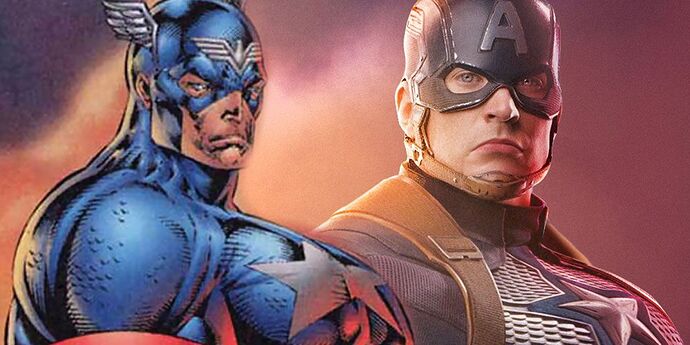 “With everything that’s happening, the things that are about to come to light, people might just need a little old fashioned.” - Phil Coulson

One of the difficulties with Captain America, much like with Superman, is getting him exactly right, because characters who are too perfect, too honorable, too self-righteous are not really the norm these days. It really is true, Captain was considered kind of an old fashioned character in the face of the Spider-mans and Wolverines and Punishers of the world. His was a fading uniform when I was neck deep in comics in the 80’s and 90’s especially. The X-Men were huge, and they got animated films. Cap did not, which I really feel has as much to do with his popularity overall as anything else.

That said… he remained a mainstay for as long as he did because deep down we crave that type of person in our lives. Decent, compassionate, caring, and willing to put their own ego at rest to do the right thing, no matter how hard. You need the right writers to be able to harness all that goodness and still make it relatable. Then the right actor(s) to bring it to life.

So, I’d say that, despite the other challenges, or the financial difficulties Marvel went through, the reluctance to rush out a Captain America cartoon in spite of the success of the other shows has as much to do with how he was perceived by the majority of comic readers at the time. We had to wait until the MCU to find the right combination to bring that character to life. And I’m thankful they did, because he’s been perfectly written and perfectly portrayed over the many years Chris Evans donned the uniform.

Anytime someone complains about a modern day comic book movie, I remember watching this on a tiny B&W TV in my Grandmom’s kitchen. Even my content starved teenage brain was underwhelmed and saddened.

One of the difficulties with Captain America, much like with Superman, is getting him exactly right, because characters who are too perfect, too honorable, too self-righteous are not really the norm these days.

“Dear Steve Rogers, do you remember when I goaded you into killing those prisoners and you made me swear to never tell any of the other Avengers? If there’s any other secrets you need kept, just let me know.” —Thor

“With everything that’s happening, the things that are about to come to light, people might just need a little old fashioned.” - Phil Coulson

There was also the 1990 movie in which Cap’s cowl had weird rubber ears attached. 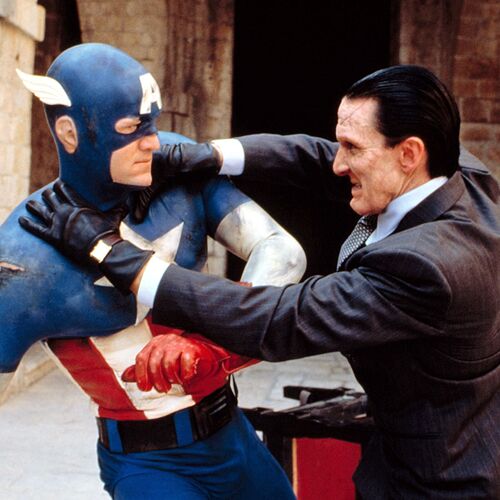 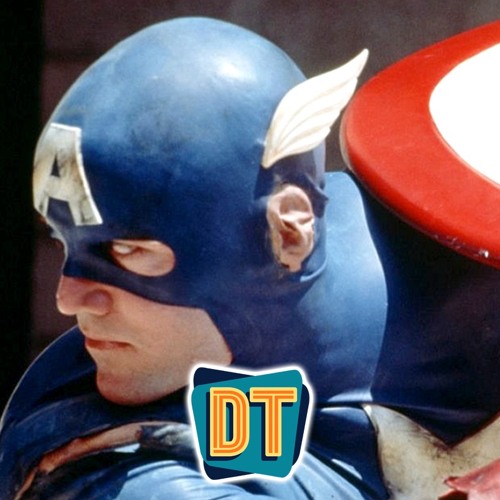 Mayhap the suits at the time would have been a little wary of the tale of a soldier whose physical prowess is due to the use of performance-enhancing drugs?

I will always maintain that the whole MCU concept was primed to live or die based on the reception of “Captain America: The First Avenger”–and it would have failed if not for the pitch-perfect casting of Chris Evans, and the centering of him as an anti-bully underdog hero instead of some kind of grizzled patriotic blowhard. 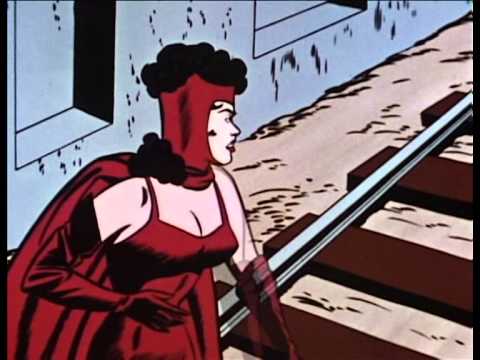 He was well known enough that I remember seeing this place when I was in Dublin in the mid-90s: 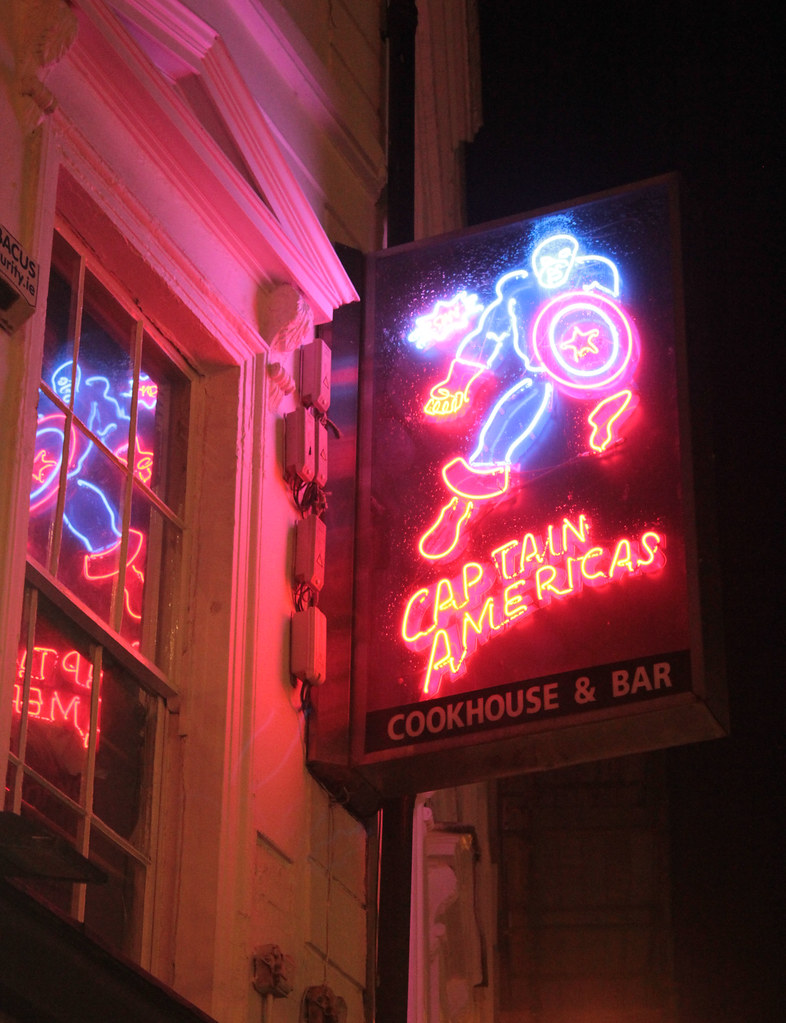 Unironic jingoism, and nostalgia for WW2, were both out of fashion in the '70s and '80s, and still controversial in the '90s

Part of the issue of course is that American patriotism doesn’t sell as well in half the world. No-one really objects to the idea of a man with spider powers or a team of hated and feared outcasts. But America the Great is a turnoff.

Given that everyone in comics was Darker and Edgier in the 90s wouldn’t 90s Captain America have violated the Pauli Exclusion Principle by existing when The Comedian had already been written up for Watchmen purposes?

One of the difficulties with Captain America, much like with Superman, is getting him exactly right, because characters who are too perfect, too honorable, too self-righteous are not really the norm these days

Warner Brothers had a really good Superman cartoon at that time. It led into a well regarded Justice League one. The Batman animated series wasn’t as nearly as grimdark as its title sequence suggested.

I wish they’d have continued making JL stories at that level quality.

There was even a unlicensed Turkish film where Captain American teams up with El Santo to battle Spider-Man. 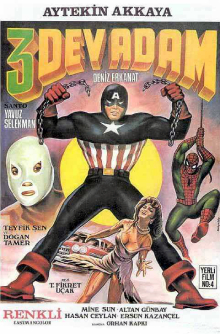 I would guess that part of that has to do with the way he was far less GO MURICA when he was brought back in the 60s. Leading to later runs in the 70’s and 80’s that were openly critical of the US and the US military.

In large part the character hasn’t been a patriotic propaganda piece since WWII.

Warner moved away from doing series to animated direct to video movies. Some are really good, the worst of the lot are mediocre.