Supremely creepy photo gallery of pandas in a Chinese zoo

I think I just figured out why they’ve been having so much trouble with their captive breeding program. It’s all just an elaborate scheme for furries to hit on bears.

I dunno. Fursuits get pretty complex, actually - far more than these suits, which just remind me of the puppets that raptor rehabilitators use to feed hatchlings.

There’s costuming, and there’s fetishism, and I don’t see the level of care I tend to associate with that…

That Panda is thinking “Help me, Help me please” 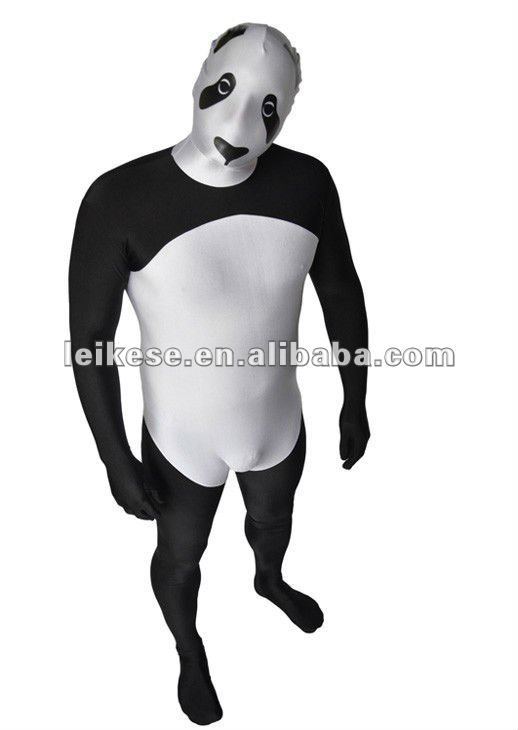 Yeah, Tao said that about them, but that doesn’t mean it has anything whatsoever to do with the pictures in the actual photo essay. Here’s a caption from the actual article, which doesn’t speak, imply or even visit the idea that this is anything but the workers at the Panda reserve way of trying to minimize the impact of their presence.

Panda costumes hang at the Wolong National Nature Reserve. Keepers who interact with the pandas must wear costumes in order to mimic conditions of the wild. The costumes are made to smell like pandas too. Photograph: Ami Vitale 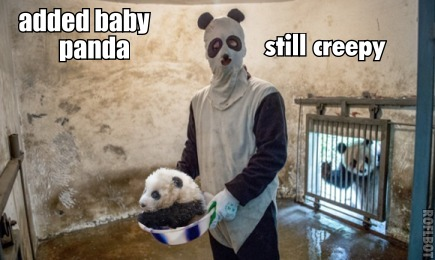 It puts the lotion on it’s skin or else it gets the hose again.

Yeah, Tao said that about them, but that doesn’t mean it has anything whatsoever to do with the pictures in the actual photo essay.

You know what’s really disturbing? This guy would see a photo essay on costumed zookeepers and think “kinkplay.” Particularly the phrase “deviant sex,” which I haven’t seen in years. What’s deviant? Playing dressup? Maybe in China that counts as shocking.

It’s the indefinite article here that concerns me. How many …? Never mind. I don’t want to know.

Reminds me of the evil pandas in the LCD Soundsystem video Drunk Girls.