Sweden hunts for undersea intruder, which could be Russia or possibly Nessie

It is ghost of Kursk…

Quick! Dust off Soviet-era paranoia narratives, so we can have Slashdot-style Yakov Smirnov snark!

It was only otters last time, wasn’t it?

Someone has mad 'shop skilz.

Nessie? Somebody obviously failed topology 101. The shores of Loch Ness are a closed curve, thank you very much. This is a different Diplodocus. 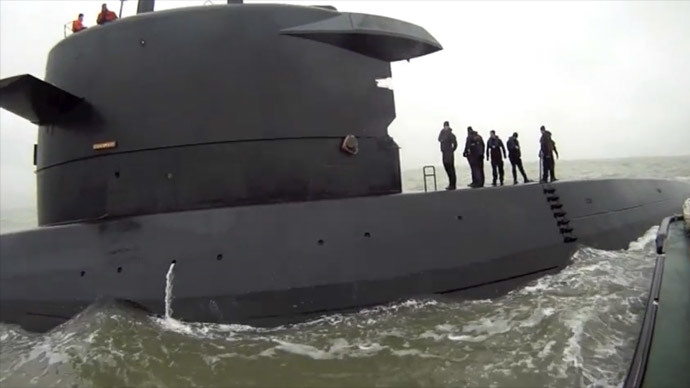 Swedish authorities reportedly searching for a Russian submarine in its waters are probably looking in the wrong direction. The sub is probably Dutch, a source in the Russian Defense Ministry told RT.

Or it could be Americans and/or Brits…
AGAIN!

I think they were mostly British.

Tunander's study of covert political structures goes back to his experience of high-profile submarine activities in Swedish archipelagos and naval bases in the 1980s. His books from the 1980s accepted the official view. In 1983, Swedish Prime Minister Olof Palme protested against the "Soviet intrusions". He was forced to cancel his policy and deep-freeze Sweden's diplomatic relations to Moscow. In 1980, 8% of the Swedes viewed the Soviet Union as a direct threat and 33% considered the Soviets

I suppose they have a coast and maritime history, but today? They narrowly lead Switzerland as a naval power.

To think that once the Saxon scourge was launched on Britain by such as these!

Every prudent Dutchman keeps one in the garage just in case the dike system finally gives out.

Could just be Richard Branson 10,500 active duty personnel 850 reserve personnel 6 frigates 4 offshore patrol vessels 6 minehunters 1 Joint Support Ship 2 landing platform docks 4 submarines 40 other ships The Royal Netherlands Navy (Dutch: Koninklijke Marine, “Royal Navy”) is the navy of the Netherlands. Its origins date back to the Eighty Years' War (1568–1648), the war of independence from the House of Habsburg who ruled over the Habsburg Netherlands.

This is a perfect moment to hearken all ye Forteans to dust off your used book glasses and pick up a copy of biologist Ivan T. Sanderson’s wonderful collection of underwater Forteana, titled Invisible Residents: A Disquisition upon Certain Matters Maritime, and the Possibility of Intelligent Life under the Waters of This Earth. (Avon Pub. 1973).
Of course 21st century primates can teep it here, though I still champion the experience of digging through the used book stores.
LO!

Depends on how you count “last time”.

Out of curiosity, are there any undersea communications cables that terminate anywhere near Stockholm (even a few tens of km away)?

I used to think, wow, the ocean is big, surely somewhere there could have been large organisms like diplodocus that survived, at least in principle, even if there is no good evidence to even make considering the hypothesis worth my time.

Then we found the Chicxulub crater, and roughly figured out the gigatonnage of what the impact would have. The shockwave alone would have deafened every living thing on the planet, making anything with an ear unable to balance (or underwater, to orient itself). Hence why short light things at least occasionally survived more readily, and why the extinction rate in the oceans was so much high than on land. Also, land waves 30 ft high circumnavigating the globe.

Fun thing you can calculate yourself with some google fu - it should have been audible (if you could avoid the deafness) twice every 34 or so hours anywhere on the planet, even six months after impact.

Well, before Britain demolished the Dutch and Spanish competition, yes…