This sounds like a horror film set for a Toy Story plus Blair Witch Project mashup: 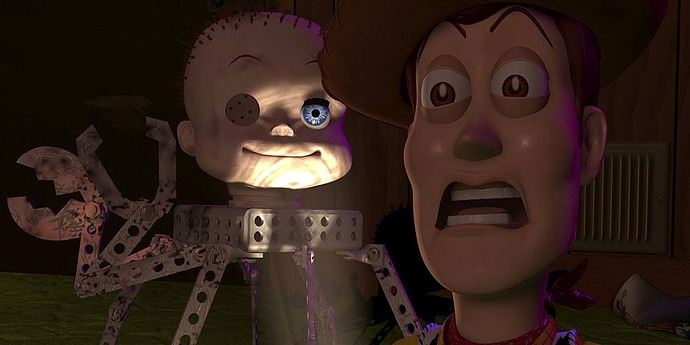 Doll’s Head Trail. Not a problem for me now, but…

… 7-year-old me once had a nightmare involving three of the things that creeped me out the most back then: confined spaces; eerie staring dolls; and 1930s cartoons. The dream: Trying to find a way out, I ran up the narrow spiral staircase in a tower. Along the tower walls were sconces made up of doll’s heads lit from the inside. At the tower’s highest point there was a window, and right outside the window was a scene playing from one of those bizarre Max Fleischer cartoons. Shit!

Should someone send John Oliver an invitation to hike this trail? Of course that assumes he’s gotten over the beach dolls.

I’ve been there once, and I should go back, considering I don’t live that far away, relatively speaking. I’m a fan of creepy dolls / creepy mannequins, so this place is right up my alley. For anyone thinking of visiting the trail: my navigation app was helpful only with getting me close to the trail parking lot; I drove around aimlessly until I lucked-out and found the lot. (That was a few years ago; maybe my nav app is smarter now…)

I dunno, I like the concept, but then the video makes it look like someone just arranged piles of trash at various points along the trail and painted fanciful comments on them. Will have to visit sometime to make a better judgement.

I had an old roommate who would go to abandoned lots in the city, pick up whatever weird objects were there, and then make sculpture collages out of them, some were quite cool. Typically an old piece of wood with arranged playing cards, bottle caps, toy parts, barbed wire, etc. They looked like the Blood & Fire reggae reissue covers. So in his case he was cleaning up litter AND making art.

Yes, from my several-years-ago visit, there was an element of: did someone just throw trash here? But if you are in the general area of the trail and have some time, it’s worth the hour or two the walk takes. I wouldn’t drive hundreds of miles…but if you’re in the area anyway, it’s a pretty good & interesting diversion.