LEGO gets scooped up in a hurry. Fortunately, my house is too small to have much LEGO out so I rarely buy anything new.

I have 10 or so versions of Slave I, and the Carbonite Freezing Chamber.

There was a huge Bespin set they made with a unique Boba Fett that I’d love to have, but it was huge and $$$.

I coach my kid’s baseball team (9 and 10 year olds) and after games instead of game balls i give out packs of cards. The kids love it! This season has been incredibly hard to get cards. First time I called Target where i used to be able to get cards with no issues at all they told me people line up outside in the morning the days the trucks arrive to get the cards as soon as they open. sometimes the cards don’t even make it to the shelf. so annoying.

I dunno if Covid have made speculation/scalping an even more lucrative business for people, but collectors are super frustrated they can’t get product. And part of that reason is scalpers/resellers.

I collected Disney Pins for awhile because I found out they made sets for their imagineers and I loved the idea of a company who workers are so proud of what they make that they budget time for artists to make high-quality swag just for themselves for a job well-done. Unfortunately, the speculators out there totaly ruined the experience for me to the point where I stopped collecting entirely.

It fucking sucks that so much of the things we value for aesthetic or sentimental reasons end up taking on ever-increasing monetary value and make the simple act of collecting some nostalgia unapproachable for so many. Replicators can’t get here soon enough*

The Star Trek kind, not the Stargate kind!

I totally agree - which is why I have tried to box in my collecting and limit myself from pining after things I can not reasonably attain. Like I like Funko Pops, but there Blue Boba Fett from SWCC that is like $400 is one that is just off the list. Getting the mainstream ones are the priority, and if I can get the more limited ones with out going crazy, then ok.

I do have a fair set of enamel pins and patches. Several are from Disney. Here is how I display them, using a poster frame and some Cordera. Though I have more now, and need to make a patches board, and a pin board. 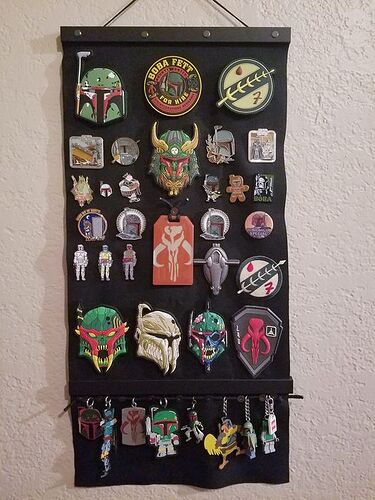 I was eyeing the LEGO Razor Crest, but I can’t justify the expenditure.

I have a box or two of Pokemon cards that an old business acquaintance gave me in the mid-2000s. I used to bring packs to my nieces and nephews, but eventually they outgrew them. When I heard the news about Target I checked the prices per pack on eBay for the ones I have and … holy moly! I might be able to sell the lot for several thousand dollars.

It feels kind of gross taking advantage of obsessive collectors and what are in effect gamblers, but those boxes are gathering dust in a closet and I need to de-clutter some more anyhow.

You’ve got to make friends with someone who works in the Maus Haus.

My sister worked for disney corporate for a few years, and they have employee sales all the time just to clear stock. Things were ridiculously cheap, and I’ve got a few of their porcelain model prototypes (marked as such) that were bought for $1, she’s got an “evil queen” costume that she got for super cheap. We had a whole box of pins that we ended up just giving to a friend that collected Disney stuff because nobody in the family wanted them.

You have a very thoughtful, excellent child.

@gracchus Bah. They likely think they’re taking advantage of you.

During the assault, the victim who is a valid CCW holder, was able to access his firearm at which point his attackers fled on foot, police said.

“The need to secure baseball card sets in transit from retail door to vehicle” should be the only allowable reason for obtaining a CCW permit.

This is all so bizarre, but also dovetails with the general sentiment that there’s a kajillion dollars of investment money out there, sloshing around, with no sane place to go? Hence something like cryptocurrency… which is near as I can tell, fantasy football for finance nerds… goes nuts.

But I’d ask the same question about collecting Pokemon cards or anything else speculatively… what is it for? What does it do? Certainly they aren’t scalping these cards because they want to play with the decks and need those cards for a competitive advantage?

This is all so bizarre, but also dovetails with the general sentiment that there’s a kajillion dollars of investment money out there, sloshing around, with no sane place to go?

My thought exactly. We need a wealth tax to put a stop to this nonsense. The problem with the ultra rich is they keep using their money to fuck with things that other people actually use. In that way you could be thankful people were investing in cryptocurrencies, except those are using almost a whole percent of the world’s electricity.

To follow up: My ex boss was a huge disney head, and we had a good client that was an imagineer. They also get rid of old decorations this was as well. He bought a bunch of main street (retired) Christmas decorations, and put them around the hospital. I think these huge plastic fake holly boughs etc… were like $5 or $10 each.

But I’d ask the same question about collecting Pokemon cards or anything else speculatively… what is it for? What does it do? Certainly they aren’t scalping these cards because they want to play with the decks and need those cards for a competitive advantage?

As I understand it, card collecting has much rarer chase cards and super limited versions of cards.

So it used to be a card set just had 300 cards or what ever, and they were all the same rarity. People would want a specific rookie card or popular player card that would bring a premium on the secondary market.

In the 90s they introduced chase cards. Holograms or foils cards that came placed 2 or 3 to a box, and would be instantly worth a premium on the secondary market.

As I understand it - and I don’t collect cards like I used to, but I have seen examples for sale - there are super limed edition cards. Cards with signatures, 1 of 20 limited editions, I think even unique cards randomly packed. So I believe that is part of what is fueling the speculator and scalper markets.

I think Pokemon and the like have foil cards that are resold at a premium - bit it could also be they aren’t putting out enough. I mean, that used to be a problem with MTG, but that was in the 90s and one would think they had the demand level figured out.

One thing I haven’t figured out is - why aren’t the just ordering from local card and game shops? Maybe they are and demand still outstrips it.

We need a wealth tax to put a stop to this nonsense.

Uhhh but I don’t think most of the people in this game are rich people. They are middle class more or less gambling to hopefully find a super rare card, or because the demand is high, turn around and flip the product at a healthy profit to others who are both collectors and speculators. These sorts of schemes aren’t being perpetuated by the super rich.

The rich are doing things like buying high grade golden age comics and other rare collectables, but I think that is a separate issue to what is going on at Target.

But yeah - we need higher taxes for a plethora of other reasons.

Uhhh but I don’t think most of the people in this game are rich people. They are middle class more or less gambling to hopefully find a super rare card, or because the demand is high, turn around and flip the product at a healthy profit to others who are both collectors and speculators. These sorts of schemes aren’t being perpetuated by the super rich.

You can think of “we need a wealth tax” as a sort of poem which means that the problem is that people believe capital deserves a return. But I would say that wealth tax shouldn’t just be for the ultra rich any more than property tax should.

But I would say that wealth tax shouldn’t just be for the ultra rich any more than property tax should.

Well, I agree everyone should be taxed some. But I dunno if I would ever consider myself having “wealth” in my life time. If I am able to save a little bit, I have to spend it on something to get fixed or replaced

Honestly I think the lower and middle class should share less of the burden. Unless we start getting paid more. Have our wages grow in a proportion to the upperclass, then go ahead and tax me more.

Also, re: Pokemon, looked into it more. I guess in addition to people chasing rare versions of cards, this is a case of increased demand as there has been a surge of popularity. And scalpers know this. So if they all go in, buy everything off the shelf, then the only place you can buy them is on the marked up reseller market. SUPER frustrating.

Though if I were Target or Walmart, I’d just start selling them like cigarettes, behind a counter, and limit purchases to 5 or 10 packs or what ever. Reduce scalpers ability to horde it all, hopefully more to the end consumer, and scalping becomes less profitable, leaving them to move on to something else.