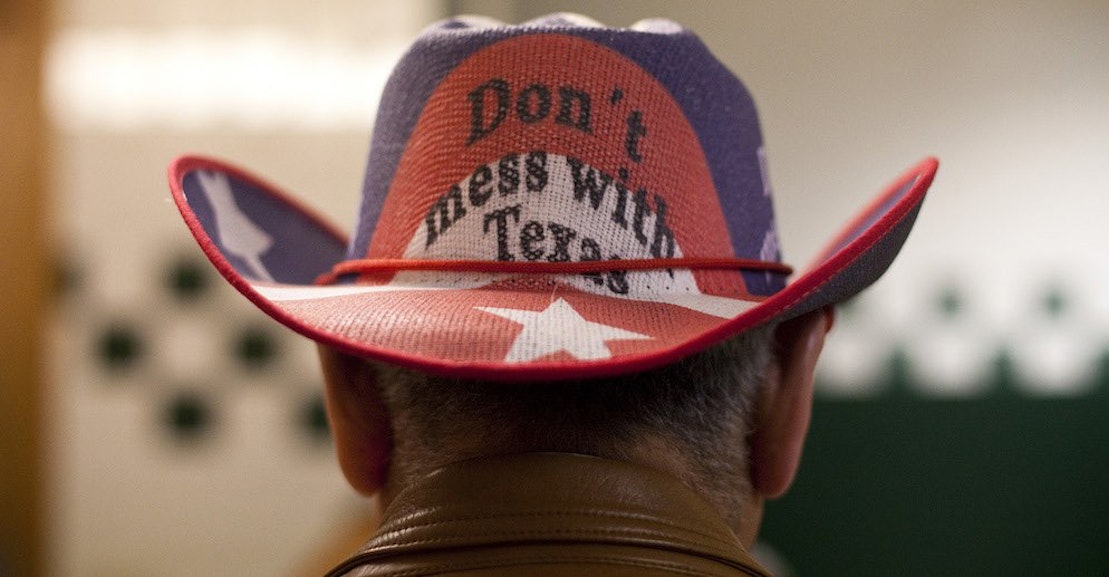 That’s so fucked up.

The bill, nicknamed the “Teacher’s Protection Act”, would create “a defense to prosecution for and civil liability of an educator who uses force or deadly force to protect the educator’s person, students of the school, or property of the school, and suspension of a student who assaults an employee of a school.

The most acutely distressing part about this is that we’re still talking about children. Dumb, snot nosed, hormonal, children. Teens at best. How can you put someone who can’t even buy a scratch n’ win in the ground?

They propose such action because the old fear the young, I honestly think it’s got something to do with terror management theory, where elderly feeble minded lawmakers literally would rather kill children to make themselves feel better about nearing the ends of their own lives.

This is somebody’s action-hero wet-dream fantasy.

They’re looking forward to the first school shooting episode to take place in the great state of Texas, at which point all of the teachers who have their carry and conceal permit will instantly, immediately, and decisively bring the incident to a close by gunning down the would be killer.

If we’re gonna go down this road, how about: the sad excuse for a human who proposed this should probably be executed just for putting it on the table.

The part that makes this extra distasteful is that any parts of it that aren’t totally insane are redundant, which suggests that they actually want the totally insane part.

There is nothing about being a teacher(or any employee of the school district) that removes somebody’s protections under whatever standards for ‘self defense’ prevail in that state(or under federal standards, if the matter somehow ends up with them). Even here in allegedly-practically-communist-europe MA, the employee handbook’s section on “don’t assault students” specifically notes that it shall not be construed as forbidding anything permitted as justified defensive force under Massachusetts law.

Since Texas teachers are already allowed to use whatever degree of violence citizens of Texas in general are allowed to use for defensive purposes, the only parts of the bill that would be actual changes would be the proposal to suspend students who assault employees(which is unlikely to be terribly novel, given that schools can and very likely do apply suspensions for this anyway, even if not specifically required to) and the part allowing you to terminate students who get uppity with your office supplies, which is at least as insane as it sounds, possibly more so.

Sshh, that whole ‘teachers are at the mercy of students’ trope is dog-whistling gold!

The most acutely distressing part about this is that we’re still talking about children. Dumb, snot nosed, hormonal, children. Teens at best. How can you put someone who can’t even buy a scratch n’ win in the ground?

Given the nonzero rate of attempted and successful homicide by people who haven’t reached legal adulthood, I couldn’t entirely rule the prospect out(as an exigency I hope never to face; but as something that I couldn’t cogently condemn on the part of an intended victim); but the idea of killing anyone, especially a dumb kid, over a little property damage seems like either a cold-blooded randroid, or hot-blooded bloodlust-just-waiting-for-an-excuse, enthusiasm for murder.

Given that intended victims already enjoy whatever latitude for self defense Texas law provides(I’m guessing that that’s a fair bit), I find it…difficult…not to suggest that this bill is pretty much aimed at exactly the deeply disturbing property damage case.

In the (much more limited and lower stakes) sense of classroom management, ‘teachers-at-mercy-of-students’ is not really a myth (I’m not a teacher; but I’ve done school IT, and I’ve seen dedicated, motivated, and skilled teachers, whose pedagogical ability and concern for their students I have the highest respect for, brought to tears by the persistent action of a few just-plain-off-the-wall cases that nobody seems to know what to do with.) Nor, for the luckless classmates of those students, is ‘students-at-the-mercy-of-the-worst-of-their-peers’ a myth. While it has attracted more attention in recent years, if you are the target of your peers, you are pretty much SOL.

In terms of actual violence, though, anything that would move into the realm of legitimate self defense is extraordinarily rare for teachers(and, should it occur, can already become a police matter or be covered under ‘self defense’ defenses, same as for a non-teacher) and, while more common among students, would not improve if students were given greater latitude for ‘legitimate’ violence, since most bullies aren’t stupid(or at least possess a form of low cunning) and would quickly adapt any such framework to their advantage.

I’d love to see some sort of actually-effective mechanism for getting the few(but potent) hard cases out of the general classroom and to the attention of somebody better equipped to remediate them (you can watch teachers, before the start of a year, going over their class rosters and their faces rising or falling as they see which classes will be nice, smooth, learning experiences, and which ones will be clusterfucks of continual needling and mayhem by the known problem students); but that’s not a “Go ahead, make my day!” problem, it’s probably mostly a touchy-feely-psych problem.

Pretty sure I’ve seen one or two ‘reality’ shows along those lines, and by that dodgy measure at least, it seems to mostly work.

In the (much more limited and lower stakes) sense of classroom management, ‘teachers-at-mercy-of-students’ is not really a myth
Nor, for the luckless classmates of those students, is ‘students-at-the-mercy-of-the-worst-of-their-peers’ a myth.

They are both definitely myths, in that they are archetypal. Which is not to say that such myths aren’t true - because experience can demonstrate that they are.

My problem with schools generally is that the faculty and staff tend to treat the students as if they were passive things to be processed. Schools, public or private, I see as groups hired to help train people. If they try to go about this with disregard, it will not go well. They are paid to provide a service, not to undermine kids and order them around. If nothing else, it sets a poor example for municipal engagement later in life. It is a valuable lesson for my kid that we are provisionally giving town government some authority, and not simply answering to them.

At least America is… or we’re leading it. And the ironic thing is that the people leading the charge are the ones who champion a christ-centered world-view, at least publicly. It’s sick.

The most acutely distressing part about this is that we’re still talking about children. Dumb, snot nosed, hormonal, children. Teens at best.

I know right? I teach the US survey at my university, and most of the kids there are still really kids, and they are all age of majority. But at that age, you can still see them sorting themselves out. If anything I feel incredibly protective of them, not threatened by them.

But this is just more evidence that our society values property over human beings. And it’s a further, deadly extension of fucked up zero tolerance policies, which as the article points out disproportionately already impacts black students (and I’d guess in general working class students as well - but even poor whites can accrue a certain amount of racial privilege).

They are both definitely myths, in that they are archetypal. Which is not to say that such myths aren’t true - because experience can demonstrate that they are.

I, too. am a pedant when it comes to people using MYTH (versus FACT) as a rhetorical tool.

This topic was automatically closed after 746 days. New replies are no longer allowed.