Tesla is cutting prices as other EV automakers charge a premium

Originally published at: Tesla is cutting prices as other EV automakers charge a premium | Boing Boing

We are watching a genius at work people. What truly amazing times we live in.

It would be nice if Emerald Boy would just sell off his controlling shares in Tesla so they could be managed by someone competent. I like the idea of a car manufacturer that sells its products directly to customers rather than through some rent-seeking intermediary, and Tesla did what none of the other car makers did in that they made normal-looking electric cars that people wanted to buy. GM and Ford were never going to try and make electric cars a viable market. Every shitty thing about Tesla can be laid entirely at Elon Musk’s feet: the elitism, the shitty build quality, the high prices, the toxic work culture, the stupid stunts with Teslas driving in tunnels, the lethal overpromised self-driving features. 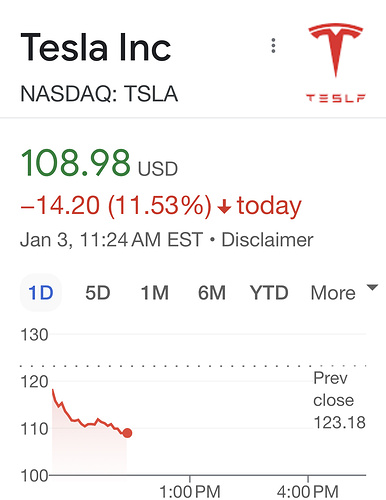 Wonder if it’ll break $100? That would be a huge psychological barrier for the totally rational markets.

Remember when people regularly showed up in the comments here to explain the game of 5D chess their god-Emperor was playing in situations like this? Good times…

I predict at some point GM or Ford will buy out Tesla at a deep discount, and merge it with its other brands. I think as a brand it has value and potential, once Musk is no longer associated with it, and they bring in more focused leadership.

As I understand it, the place has been run by the skin of their teeth for years. 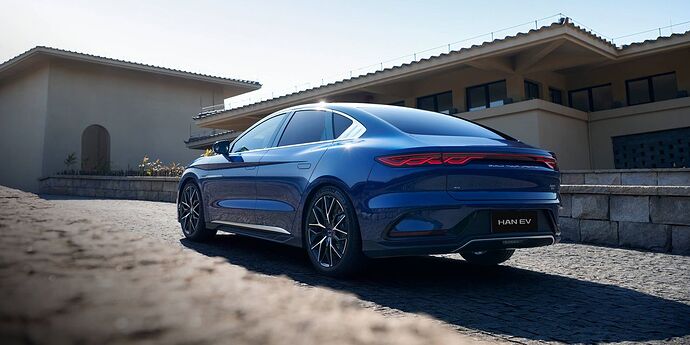 There’s still sooo much room for it to fall. TSLA is still valued at more than Toyota and GM combined.

Remember when people regularly showed up in the comments here to explain the game of 5D chess their god-Emperor was playing in situations like this?

No, I don’t actually. But I do remember when Consumer Reports graded the early Model S as a perfect 100 (which I think was a first). The following year or two showed a considerable re-evaluation of that score.

Honestly It doesn’t seem that far off to expect him to become a tropical island supervillian, building an underground base from which he will “save the world by destroying/controlling it”. Man, the 80s and 90s movies and comic books worked overtime to warn us specifically about Trump and Elon. Hopefully all that latent training starts to emerge…I have been learning Kung Fu the last few months…

Unfortunately the market valued it as a silicon valley tech company rather automobile company. Reality is now setting in.

It’s always been a /wallstreetbets memestock, and despite pioneering electric vehicles, it’s still just a car company, and it’s price should be on par with other auto manufacturers.

Discounting your cars, so more and more people get dumped into the already-broken/overwhelmed Tesla service environment. What could go wrong? You couldn’t pay me to drive a Tesla at this point.

i guess i’m one of those people. leased a tesla M3 3 years ago on the premise that they were built here in fremont by americans vs. many of the other EVs available at the time.

the car is definitely junk. the inside of the doorframes at the front fenders is not even painted. well, it’s painted with a little bit of overspray. took the car to the service center for a couple of minor problems and was surprised how full of cars it was. that gave me pause.

thankfully beyond the fit and finish the car has been fine. but it creaks and groans, the whole frame torquing when you go over any kind of soft curb. this never bothered me much as it’s just leased. i’d feel a lot differently if i had bought the car.

then i come to find out that the factory is a racist and sexist shitshow. i guess i knew musk was sketchy but not to that extent.

then he takes over twitter and goes full redpill, destroying the company and making a complete fool of himself.

suffice to say my next car is not going to be a tesla when this lease ends.

N=1 anecdotal evidence but there is some truth to the narrative.

We are watching a genius at work people

To be fair, Teslas are overpriced, especially given the poor build quality, and there are a lot more alternatives now. So this was likely to happen even without Elno very publicly immolating his image as a smart guy and utterly destroying his personal mystique that he made a big part of the Tesla brand. But he did do that, so I expect things are going to get a lot worse for Tesla at this point…

GM and Ford were never going to try and make electric cars a viable market. Every shitty thing about Tesla can be laid entirely at Elon Musk’s feet: the elitism, the shitty build quality, the high prices, the toxic work culture, the stupid stunts with Teslas driving in tunnels, the lethal overpromised self-driving features.

No car company was. Even before Musk was involved Tesla was started to make a car company that more resembled a tech company, with software and a proprietary motor standard the goal. Which is inevitably shitty.

They wanted to produce production cars. But the baseline and ideal was originally very expensive sports cars. Which elitism in spades right there.

Ford was shipping electric pickup trucks in the 90s. And all the major automakers had development programs for decades. There was simply a pretty big practicality issue before the last 20 years.

Most of Teslas early base ideas/tech, personnel etc came out of those large Automaker R&D programs. The founder’s first attempt was even to purchase a small scale electric sports car maker founded by a former GM employee. And that company’s drive train was used in the original Tesla Roadster.

But frankly all of this was triggered by and forced by government regulation. That GM program and those electric Ford fleet trucks were meant to tick a box in California and Europe, for minimum numbers of zero emission vehicles. Tesla only scaled past halo cars because of government funding for EVs, solar panels and battery tech.

All Tesla really did was demonstrate a market, and execute when/right before this was really practical. Without government action they’d still be a cool looking Uncrate post.

I predict at some point GM or Ford will buy out Tesla at a deep discount, and merge it with its other brands.

It’ll get parted out. None of the major automakers needs the whole company, and Tesla was built out of personnel from their own EV projects not the other way around. People have been filtering back for a while now. Telsa’s various parts have value to different companies though. The factories, the charging and drive train standards. The solar panel division. And the battery operation is probably the most valuable thing with regulation tying subsidies to US manufacturing and development of batteries.

True, but someone will walk away with the brand itself, which I think still have value.

And the big guys will pick over the bones for the tech they can use.

A friend is buying a 2023 Chevy Bolt EV. He shopped dealers within a 200 mile radius of home here in North Alabama, and these cars are selling above MSRP before they even reach the dealerships. He lucked out and was on the phone with the sales guy at a smaller dealership when their next one hit their delivery schedule. He put down the requisite deposit and has his fingers crossed.

There are definitely plenty of Teslas around here; the rocket and missile engineers at Redstone seem to love them, even though they had to go out of state to buy them. But the more I pay attention, the more I’m seeing the subtler ones like the Bolt, the Kia and Hyundai models, and even still a few of the early ones like the Nissan Leaf and the BMW rollerskate. I’ve seen exactly one Rivian. Informal observation hints that Tesla does not own the EV market anymore here.

True, but someone will walk away with the brand itself, which I think still have value.

If it comes to that, instead of just burning to the ground. I can imagine someone buying up the battery manufacturing and the charging network. Those two things seem to have the most value.

The charging network is the largest one out there and would be a huge head start for someone. Of course, none of the other charging networks seem to be run by competent people.

Isn’t the battery tech supposed to be very good, along with the actual manufacturing of it? Someone buying that could focus on just becoming a battery supplier to everyone else. “Buy your XYZ car Powered by Tesla.”. Kind of like how the computer companies buy the processor from someone else.

Either of those, completely divorced from the actual cars, would be a way to leverage the brand and eliminate the cars completely. Might not even be the same purchaser. They’ll have to fight over who gets the name. Maybe just rebrand the network “Supercharger” instead of “Tesla Supercharger”.

Though those are similarly over-valued, which explains a lot.