Texas Department of Public Safety trooper was on-scene at Uvalde massacre after 2 minutes and 28 seconds, not 9 minutes as previously disclosed

Originally published at: Texas Department of Public Safety trooper was on-scene at Uvalde massacre after 2 minutes and 28 seconds, not 9 minutes as previously disclosed | Boing Boing

They should all resign in shame.

The head of the largest police union in Texas said the new timeline raised serious questions about the department’s trustworthiness.

Maybe Uvalde cops are non-Union or belong to a different union; and so this is a chance for the largest police union to stick the boot in?

That’s an extra 6.5 mins it stood around with its thumb up its butt instead of saving lives. What scum they are. Do a tragically shitty job, then lie about it.

Journalists need to step up and resist the copaganda

The news out of Uvalde is worse with each passing day—and just the latest example of legacy media's failure to be critical of law enforcement.

Some outlets, including a fave of mine, are suing. I’m hoping they win and get not only the records but remove the ability of law enforcement to claim they can withhold info because of “an active criminal investigation” when they admit the only suspect is dead. 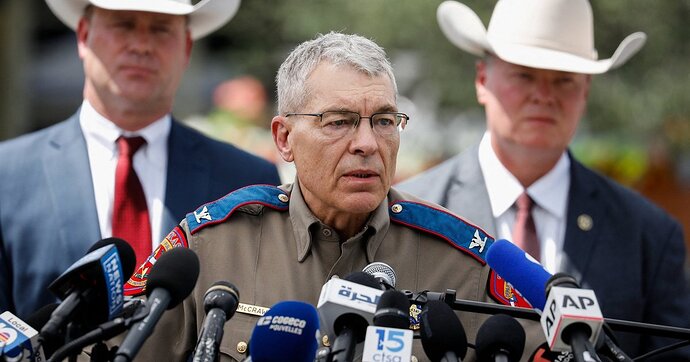 The lawsuit alleges that the state police have unlawfully withheld records, including body camera footage and emergency communications, during the Robb Elementary shooting.

This has real gangster “You shouldn’t have been stupid and bought a Ferrari right after the bank job, you’re on your fucking own here…” vibes. Even a bunch of murderous gansters has a code. Apparently that code is “don’t do anything that makes us look bad and can’t be swept under the rug in a week, you know, unless it leads to riots in majority-black cities, then we get to crack heads, and white people will give us more funding.”

Yeah, really, it does seem like a “Somebody is going under this bus, and it’s not us.” I guess I’m so used to police unions backing up the worst officers no matter what, but apparently they will dump a whole town if it looks too systemic.

The head of the largest police union in Texas said the new timeline raised serious questions about the department’s trustworthiness.

Seriously? They are turning on their own now? Police unions will usually back the blue regardless of how heinous the offenses are!

Don’t give them the option of leaving on their own terms. Fire their asses. I’ll settle for firing them from their positions, though the idea of launching them out of a cannon does have some appeal for the vengeful part of me.

The second sad part about this is that cops kill kids all the time, kids in cars getting shot through the window while cops are shooting wildly at a suspect, running kids over doing reckless car chases, being chicken-shit hair-triggers around a bb-gun. Bizarre that the only time they can’t shake the press is when kids get killed because they weren’t shooting.