The $6 Ikea milk frother is terrific

I have a nice espresso machine (a Rancilio Silvia) but I hate using the frother to make foamed milk for my cappuccino drinking guests. On our last trip to Ikea I bought this battery-powered milk frother. Wow, is it great. It whips up milk to a voluminous foam in a matter of seconds. It also makes matcha, cocoa, and butter-coffee with ease. Just stick the business end into the mug and turn on the switch. It’s better, quieter and cheaper than one of those blender sticks. Amazon sells them for $6 including shipping. It takes 2AA batteries (not included).

Also recommended for wine aeration, they are more gentle than using an immersion blender.

A faster way to aerate wine

Obviously, for a proper cappuccino (steaming/boiling the milk; the FLAVOR!) has to happen just before sticking the frothing do-dad in for the mix.

Own one. Love it!

They’re also a fun thing if you glue a whistle noise maker to the springy end. Whoooooo-eeeee!

I believe you can get better steam tips for your Silvia’s wand, but it is true that single-boiler home espresso machines are tedious when making drinks for several guests, as they can’t provide enough steam for large amounts of milk.

We have one of these 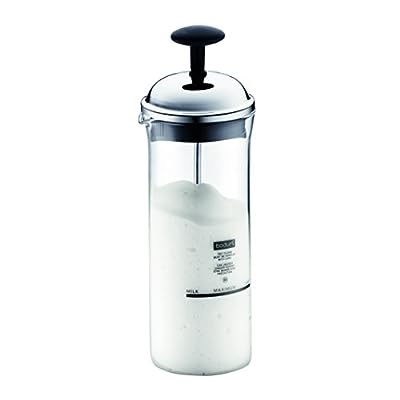 The CHAMBORD milk frother foams up your milk in no time, unplugged! Just pour cold milk (skim, 1 or 2-Percent fat) in the glass jug und move the plunger up and down a few times

Put the milk in the glass bottom part, microwave, then pump the handle up and down a few times. No batteries required.

It also doubles as a USB power brick! jk

My kids have used the same IKEA frother for 11 years. it works great on hot chocolate! makes it frothy. Warming the milk just so is part of the flavor.

The connector between the motor and the twirly bits has broken several times (always able to superglue tube back together, maybe replace with a tight flexible plastic tube?)

We got a more expensive and fancified version with a cooking kit a few years ago: it lasted about two years.

How have I survived this long without an Ikea milk frother? It is a testimony to the resilience of the human spirit.

FYI, it’s actually only $2.79 at IKEA. But I guess Amazon has to cover shipping and BB’s cut from the referral. And why bother using a machine that’s designed to do the job and runs off mains, when you can use a battery powered one, and throw away all those batteries?

Not sure about the requirements for frothing milk, but I use a beefier version of this for mixing protein shakes and the like. Look for models that take 4 AA batteries, mine can even froth egg whites due to the additional torque. Bonjour Caffe Turbo. They have a simple white one, but also versions that come with a little stand.

And why bother using a machine that’s designed to do the job and runs off mains, when you can use a battery powered one, and throw away all those batteries?

Or you could just use rechargeable batteries. I hear they’re a thing these days.

Not a fan of single purpose kitchen tools. I like to take a whisk, put it in the hot milk/cream, and use the palms of my hand to spin the handle back and forth. The milk doubles in volume ina few seconds using this method. It’s frothy and light and wonderful.

I get what you’re saying but that’s basically taking a single-purpose tool (a whisk) and using it to whisk something.

If what you mean is that this thing is only for frothing milk for cappuccino, then:

Also recommended for wine aeration, they are more gentle than using an immersion blender.

They’re also a fun thing if you glue a whistle noise maker to the springy end. Whoooooo-eeeee!

It is a good tip though.

that’s basically taking a single-purpose tool (a whisk) and using it to whisk something.

All I’m saying is that a whisk can be used anytime anything needs to be whisked, blended, frothed, beaten, etc. but this tool that likely wont last as long as a whisk (which by the way most kitchens already have) has, at least, fewer uses.

You are an everyday hero.

The ikea thingy has outlasted several whisks (to be fair - probably because it sees less use and doesn’t have to cope with my hamfisted whisking technique).

Whisks either bend out of shape surprisingly quickly (see above re technique) or if coated, the coating breaks (ditto) meaning I can’t use it in anything non-stick or enamelled (at least not unless I want my spouse to tell me off).

Are we OT here? There must be a topic for debating the merits of different kitchen tools here somewhere surely?

I am old school.