The alt-right loves Nietzsche, but Nietzsche would not love them 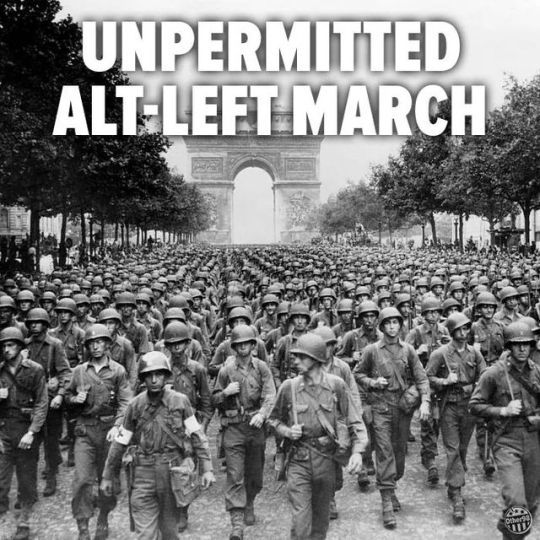 “Re-reading Nietzsche” is going to be next years bestseller.

In the For Dummies series.

For everyone who never read a page of the old walrus.

I, for one, haven’t read more than about 30 pages. In school. Can’t remember much. Found Sartre and Camus more interesting, and Schopenhauer more fun, poetically. And I can’t even properly remember THEM. So, tell me again, why should I bother of people think the Neofascists like Nietzsche?

‘Otto’ totally embodies the pretentious but idiotic and insecure ‘tough guy’ who thinks he’s way smarter than he actually is.

I’d feel better about it if I was as handsome as Mr Kline. 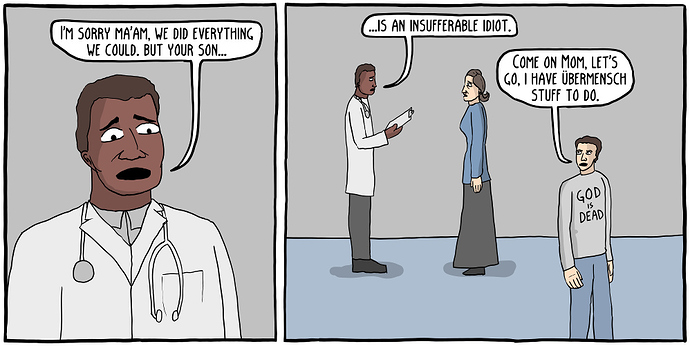 Image text: Nietzsche was brilliant and all, but any time someone says that they are “really into Nietzsche”, some stupid crap is about to come out of their mouths.

It’s worth questioning the value of a “great” philosopher’s work when it functions as little more than a Rorschach test for various sorts of vapid mouth-breathing pseudo-intellectuals. Also, it’s foolish to claim to know what a historical figure would or would not “love” if they weren’t long-dead.

Honest question: Have you read any of his works in full?

Asking as a friend.

In my humble analysis, he’s an important part of early existentialist philosophy whose body of work eschews ideology for ideas, or “His writings are riddled with contradictions and puzzles.” Like most philosophers, reading him in isolation or superficially is unwise and leads to unfortunate side-effects such as Randianism.

You’d be hard pressed to find a twentieth century philosopher he wasn’t an influence on. I think a lot of really good smart people dismiss him out of hand because racist idiots appropriated the term übermensch and twisted his writings to mean what they want it to mean. Sadly, his sister Elisabeth played a big part in dragging his legacy through the mud.

I’m not here to tell people their wrong about Nietzsche. If they walk away from his writings with the same impression they had going in, that’s fine.

Nietzsche was a lot of things — iconoclast, recluse, misanthrope — but he wasn’t a racist or a fascist. He would have shunned the white identity politics of the Nazis and the alt-right.

I don’t think there’s any “would have” about this. Didn’t Nietzsche have a huge falling out with Wagner over Wagner being a proto-Nazi?

I’ll admit right not to having read basically 0 Nietzsche. My entire knowledge of him comes from a series of Great Courses DVDs that I inherited, and did not finish watching. That being said, a lot of that interpretation of his work was really interesting, and, I think, had some valid ideas. I’m told part of the reason it reads badly is because Nietzsche’s sister edited a lot of his unpublished work after his death, and she basically was a Nazi, and that, yeah, Nietzsche was kind of a troll.

I could be way off base on this though, as, again… Great Courses dvds. I’ve been interested in reading more, but… well someone once told me I would make a great philosopher, because I disagree vehemently with all other philosophers. I don’t know if the first part of that is true, but the second part causes me to shy away from reading too much philosophy so I don’t waste my day ranting at a book.

Only useful thing I ever got from Nietzsche: He who has a why can endure any how.

That’s the long and the short of it for me. He was a noted Woman hater to the point you’d think he was convinced he was hatched from an egg.

Honest question: Have you read any of his works in full?

It has been over 20 years ago now but I forget which one exactly. I do remember thinking some of it is interesting but his phrasing for some stuff was just in today’s words, ‘bitch, please’.

“The London Underground is not a political movement, Otto. I looked it up.”

I do remember thinking some of it is interesting but his phrasing for some stuff was just in today’s words, ‘bitch, please’.

Fair enough. And FWIW, I agree, some of it certainly is.

I think TSZ Backworldsmen is a beautiful bit of writing.