The beauty of an energy-free treadmill

Life’s too short for treadmills.

At a sleepy little gym and pool complex here in Vermont, on a conventional electric machine this week, the current was so high it overloaded a nearby stereo receiver playing upbeat pop music for a water aerobics class. All of a sudden, seven wet, angry seniors swarmed from the pool.

Sounds like someone hasn’t properly wired their business. I wonder what their insurer thinks of that.

Other than the high price, I don’t see the point of a treadmill. Maybe the poor guy lives in an industrial park with no sidewalks. Those places are grim.

Running on ice is not fun. But really Bob should get some back country skis!

Treadmills are great for when you don’t want to run outside.

Back to the point of this post, I wonder why these are so expensive – they don’t have any motors or loads of electronics. They are relatively simple things, they should cost less than conventional treadmills.

Bob, the image of a coterie of bedraggled septuagenarian Brattlebudlaens rocking your treadmill is highly amusing. I didn’t even realize we had a health club in town with a pool!

I’ve used that treadmill, but the downside is that you are constantly running uphill. It’s great for HIIT training, but for a long run it drives me nuts. Quite the calf workout.

And yes, running outside is best, but some days it’s either -17, or 95 out, and you really need to get some exercise.

At a sleepy little gym and pool complex here in Vermont

Was it the Edge? Please tell me it was the Edge!

YakTrax are great for running on ice and packed snow.

Yesterday was -15 here before the windchill. I can only run about 5-10 minutes outside when it’s that cold, regardless of the equipment.

But at that only enraged them, and they gripped the handrails and rocked the machine side to side.

Sounds like someone hasn’t properly wired their business. I wonder what their insurer thinks of that.

What would be proper in your opinion, one circuit per treadmill? Because at 1800 watts (16 amps) continuous, that’s what it would take to keep things things from blowing fuses.

What would be proper in your opinion, one circuit per treadmill? Because at 1800 watts (16 amps) continuous, that’s what it would take to keep things things from blowing fuses.

The specs on commercial treadmills say “dedicated 20A circuit required.” (source1) (source2) The club should believe them.

I don’t know, I’m going to go ahead and forgive them for sharing a circuit between a stereo and a treadmill.

And as the poster is pointing out, its downright absurd that these things take so much power.

And insinuating that all this should in any way involve an insurance company is just silly.

And insinuating that all this should in any way involve an insurance company is just silly.

How do you think electrical fires happen?

I don’t know, I’m going to go ahead and forgive them for sharing a circuit between a stereo and a treadmill.

If a stereo is tripping the breaker (unless it’s Doc Brown’s amp), that means they have the treadmill on a 15A circuit anyhow, so it’s already overloaded.

This is bad news.

Even worse news is that if they have their business wired this way, it means no competent professional has evaluated their electrical wiring.

I inherited a motorized treadmill from my dad. And I used it quite a bit, usually watching netflix or some documentary on my tablet makes the time pass a lot quicker. (I do like to jog, but not in the rain or dark, which tends to be the case in Vancouver when I have time to do it in wintertime). But after using it for a couple of years (it also required a dedicated 20amp circuit) I noticed an electrical smell and wondered if the motor was in danger of burning out so I stopped using it. You are supposed to add this belt lubricant which I did as well, in case this was the issue.

But around the same time in one of my weekend runs I noticed someone put a stairmaster out on the street, so I came back and picked it up, and have been using it since then and I feel it is much better workout, less impact and usually work up a sweat after an hour and if the calorie burned estimator is accurate I tend to burn around 100 or 200 more kilocalories on the stair exerciser. (I can’t remember the brand name, can look it up when I get home.

So I’d say finding a stair exerciser would probably be a better deal than an expensive non-motorized treadmill - bet a quick search on craiglist can get you a deal. Usually 2-3 months after Christmas and resolution time.

A word in defense of treadmills: you exercise more if you are not miserable while doing it.

I live in a place where for six months of the year, it’s either 80+ degrees and 100% humidity, or the middle of the night. (Most of the other six months, it’s raining.) People can and do run in those kinds of conditions all the time, but I can’t. Maybe that’s a valid physiological excuse, or maybe I simply lack the personal awesomeness and force of will, but either way, it ain’t happening.

So instead I run on my treadmill and watch Buffy The Vampire Slayer, and stave off my natural tendency towards sloth and obesity for another day.

Interesting energy polarity between exercisers, use treadmill that suck up energy while you burn it, vs a bike, stair or elliptical that could be generating power to your household batteries (you do have those right?). Surely everyone remembers Charlton Heston keeping the lights on pedaling a bike in Soylent Green?

In my mind, the great advantage of treadmills is safety: I do not enjoy the prospect of running out to somewhere and then encountering an injury or equipment failure and having to slowly make my way back. The alternative is to run around a relatively short circuit repeatedly, but I would question if that’s particularly more entertaining than the treadmill.

Anyway, the local gym has one of these energy-free treadmills. It doesn’t particularly appeal to me; it just feels completely different from a standard unit, and not in a good way. (It might be the discontinuous belt.)

I have also tried the “Jacob’s Ladder”, which is a relatively low-power device, but it seems to pose a higher risk of injury. 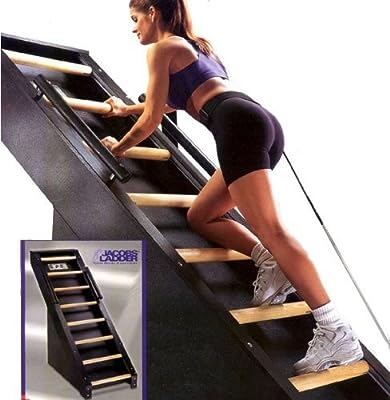 Jacobs Ladder automatically adjusts to match your speed. The faster you go, the faster it goes!!  Click to download video.The patented treadmill climber designed for fitness professionals to provide p ...

On an unrelated note: why must it be so difficult to change these units from Imperial to Metric? The only time I’ve managed to switch one over was because I was able to look up the obscure key combination for the service menu online (and the owners had decided not to password-protect it).