The brilliance of Ray Harryhausen

Originally published at: The brilliance of Ray Harryhausen | Boing Boing

Oh, I think that while the golden age of practical effects is over, there will always be a place for it mixed in with CGI. Mad Max: Fury Road, Stranger Things, and even the original Jurassic Park show the value of merging the two. Harryhausen’s work will always be admired for what he did with what he had to work with without access to CGI, though, no question.

CGI, though, has way more value than just serving bloated Hollywood block busters. It really helps small budget and arthouse films do things they couldn’t just twenty years ago. Check out the Dust channel on Youtube for some great short science fiction features. Even SF television shows with small budgets can rival big budget feature films these days (first couple of seasons of the Expanse on SiFi have effects as good as later seasons).

I ate, slept and breathed Harryhausen in my youth - in the days before VCRs, staying up late to catch the weak black & white signals of one of his flics airing on CKVR out of Barrie - devouring every issue of Famous Monsters, trying to glean whatever knowledge I could wring from their articles and photos - making our own stop-motion 8mm epics in my friend’s garage. That obsession fed my work in theatre and eventually as a puppeteer for Henson. My wife designs and builds puppet characters and a number of years back she got to make a caricature stop mo puppet of Harryhausen which was presented to him during a tour that took him through Toronto - she got to meet him. I would have but was too dumbstruck so I just stood at the back of the room, watching, mouth agape, at the man who set my imagination on a path I am still following.

Isn’t the heavy use of visual effects a union thing?

“Ray Harryhausen: Special Effects Titan” from 2013 (sorry, somehow unable to upload a picture) is a fun documentary about him, made by some real afficionados and including vintage interviews with the master himself as well as interviews with many directors who may be considered Harryhausen’s spawn. I managed to get it cheaply on blu-ray. Warmly recommended if you can get it.

Let’s be honest; we’re never going back to practical effects.

directors who may be considered Harryhausen’s spawn

Related: I had a chance to see a special screening of Phil Tippet’s 30-years-in-the making stop motion masterpiece Mad God a few months ago. A brilliant, demented mindfuck that proves there are still a lot of people passionate about this craft.

As Tom Hanks once wisely said, “‘Jason and the Argonauts’ is the greatest movie ever made.”

I’ve only seen the incredibly promising trailer. Tippet appears to be in the same camp as Russian animator Yuri Norev: Not enough funding, and decades working a project; for Norev, 40 years so far. Obviously, investors, studios and others not only want cheap-as-possible… but also quick – something not in the DNA of stop-motion film production. To get something out within, say, 3 years or so, one needs many animators working simultaneously. I don’t think Tippet or Norev have that luxury (or perhaps, desire?). If it was a matter of funding and I had money to burn, I’d throw it at Tippet, Norev, and the Quay Brothers. They have much to say, and time is running out.

He may not have seen Nolan’s Dunkirk yet. A practical effects tour de force.

Tippet appears to be in the same camp as Russian animator Yuri Norev: Not enough funding, and decades working a project;

I don’t get the impression he’s been hurting for money, at least not since Jurassic Park. The way Tippett told it main reason he shelved that project for decades was that his special effects company got so successful he didn’t have the time or energy to dedicate to finishing the film until some younger animators found the old models and convinced him he needed to complete it.

Along the way he literally had a nervous breakdown and had to be institutionalized for a time, which is a frankly a pretty badass backstory for a movie about a surrealist hellscape.

Oh, man. Thx for the info. It sounds as if Tippet should corral enthusiastic and like-minded animators to help him finish the film.

He did finish the film, largely with the help of young animators from his own studio putting in unpaid time on evenings and weekends because they were so enthusiastic about seeing the film completed. 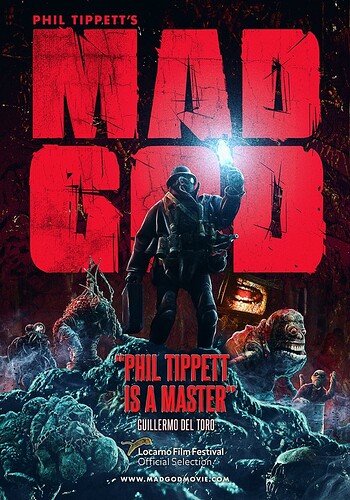 Where is Mad God streaming? Find out where to watch online amongst 45+ services including Netflix, Hulu, Prime Video.

I was lucky, I got to see it at one of the first theatrical screenings with the filmmakers.

I don’t think Phil actually said the words “finally I can fucking die now” but I did get the impression that was how he felt about completing the project.

He did finish the film

So, you leave the best part for the end?!

Perhaps an overly US -centric take, but VFX is one of the departments that isn’t unionized and it’s a reason that’s frequently mentioned when people question the reliance on green screen, and post production for costuming, props, lighting, etc.

I love practical effects, but it seems like the movie industry as a whole can’t get over it’s addiction to computer effects.