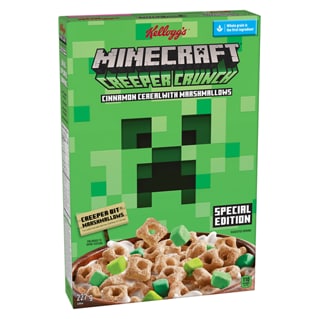 The Monster Cereals hold an interesting, even unique place in cereal advertising. Most cereal mascots were either invented solely to go with a cereal (Tony The Tiger, Lucky The Leprechaun, Toucan Sam) or taken directly from another source (Spongebob, Baby Yoda, Mr. T). Count Chocula and crew were adapted from pre-existing sources but not directly connected to their source material.

And Dan’s research was so extensive I’m surprised he didn’t turn up that in the early '80’s General Mills was a sponsor of the Opryland theme park. I feel for the employees who dressed up as Count Chocula and Franken Berry and wandered around in the summer heat.

It’s also surprising there was no mention of the Count Chocula and Franken Berry cookies released this year. Maybe just as well, though. They’re…not good.

I’m old enough to have eaten these when they first appeared on shelves in the early '70s. My fave was BooBerry. My memory tells me that the cereal pieces were originally the oat-based formula used for cereals like Lucky Charms and the all-but-forgotten KaBoom. When the monster cereals were reintroduced seasonally a couple of decades ago, the “cereal” pieces were now made from that cut-your-mouth crunchy stuff that Cap’n Crunch is made from. Can anyone else out there confirm this? I watched the video, but unless I zoned out at a critical moment, this change is not addressed.

Yes, he covered it. They made a change from the original oat-based cereal (see Alpha-Bits) to a corn-based cereal.

I was a Boo-Berry fan also, but my brothers always outvoted me in favor of Count Chocula.

I’m glad you mentioned Cap’n Crunch because his Halloween cereal–the one that promises to turn milk green–is what I think a Creature From The Black Lagoon-inspired cereal might have been if they’d ever gone that route.

I was a Boo-Berry fan also, but my brothers always outvoted me in favor of Count Chocula.

I can think of at least two other chocolate cereals but Boo-Berry is the only blue cereal on the market. That should have given it priority. Thankfully Boo-Berry still gets an annual re-release, unlike Frute Brute and Yummy Mummy who only show up every few years.

Thanks for confirming! Whew … I’m not crazy, just hard of hearing. I’m not sure how I missed him talk about that. I loved the original cereal, but can’t eat the new stuff. And it’s not because I’m an old man now. I still enjoy certain kids’ cereals, though I rarely eat them nowadays.

Having just recently had some, I can say that it is corn based but not cut your mouth Cap’n Crunch style. (For Halloween month, my brother bought me all three of the main monster cereals.)

i didn’t buy any this year (my store sadly didn’t stock Fruit Brute), but word on the street is that they changed the flavor of Fruit Brute this year from lime to cherry. Anyone happen to try it this year? seems like a bad move to me.

I tried it and, yes, they changed the flavor to cherry, or something like it. The best way I can think of to describe it is they tried to make Twizzlers into a cereal. They should’ve stuck with the Tarantino version. 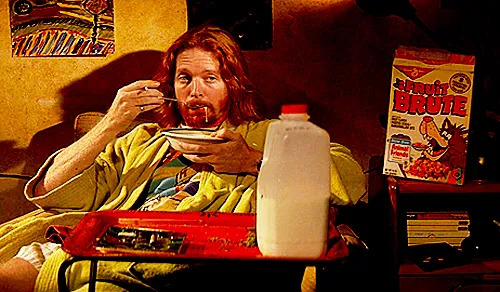 alas! i just finished watching the entire video, and he does cover the switch from lime to cherry, which i guess has been the norm for years now. shows how often i buy Frute Brute (or Fruit Brute).

Yay! Fruit Brute! I just bought a box of that the other day.

I commend to your attention the webcomic “Breakfast of the Gods”.

It stars pretty much EVERY classic cereal mascot. From the TVTropes page:

The Honey Nut Cheerios Bee’s corpse washes up on a beach and all fingers point toward Count Chocula as the perpetrator. Snap, Crackle and Pop disappear shortly thereafter, and Cap’n Crunch and Tony the Tiger investigate.

It’s been offline for years, probably because of copyright/trademark issues, but you can still find it on archive.org: 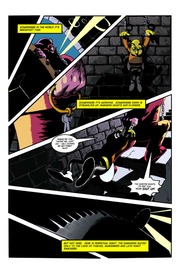 There are three books.

I pity the fool that doesn’t eat my Mr T cereal.