The final Pratchett: The Shepherd's Crown

I need to retry this one. I love the Tiffany Aching books, especially Wintersmith, so I didn’t bother reading the synopsis before picking this up. If I had, I think I would have known to wait, with my best friend awaiting several biopsies and Granny Weatherwax being one of my all-time favorite Pratchett characters. One my “to read” pile gets whittled down again, I look forward to actually reading The Shepherd’s Crown. With tissues. Lots of tissues.

My 11 year old daughter just finished this book before I got a chance to. I finally got her to try the Tiffany Aching books about 2 months ago, and she blew threw them, she loved them so much. It is awesome to be able to discuss pTerry with her… I think she is sad that she is so young and has no more Tiffany Aching books to look forward to… on the plus side, she’s got, what? 40+ other Discworld books to look forward to…

I think you mean Equal Rites, which was the third book, not Sourcery.
And the two books provide beautiful bookends to the whole series. (Yes, I know there were two titles before ER.)
Equal Rites is about how a woman can be a wizard, and The Shepherd’s Crown is (partly) about how a man can be a witch (even as both of them learn that entrenched systems are not overturned so easily…)
That’s what always got me about the series: Pterry was interested in changing the world, but he also understood that there were no simple answers; it had to be done a step at a time, with the consent (not the abuse) of those involved and the understanding that some will not be willing to change. The transformation of Discworld over the course of the books provides a splendid historical journey (even as it is internally sometimes inconsistent, which is how history is too, of course!) and the world at the end feels a far more inclusive place than perhaps it was at the start.

I was reading the book a few months back, on a sunny afternoon sitting outside my favourite pub with a pint. There is a scene early on in the book which left me sitting, beer in hand, tears trickling down my face.

Pterry, you are and will always be sadly missed.

I’ve often felt that, rather paradoxically, Pratchett’s Discworld books for younger readers more readily venture into darker places than the adult titles. At one point during my first read of The Amazing Maurice…, I very nearly decided to put the book and not pick it back up again (those of you who’ve read it probably know the point I’m talking about). I was not just upset, but really gutted by what I had just read. And these are fictional characters, for crying out loud.

I’ve had the same experience a couple more times since then (including in The Shephered’s Crown), but it’s always from one of the Tiffany Aching books.

As with the all the other Tiffany Aching books, I read this one aloud to my two 12-year-old girls at bedtime, one chapter a night over a few weeks. I consider it fortunate in that I got to read this last bit from the Discworld at a slow pace, and digest it over time, rather than tear through it in an evening as I would have done left to my own devices.

I now find myself slightly envious of my girls, since we’re now circling back around to pick up the rest of Pratchett’s books from the beginning, and they get to read them for the first time (although, order not being paramount in the series, we did start with Equal Rites.) We’ve already read through the Bromeliad and the Johnny Maxwell books.

(Yes, I plan to keep reading to them as long as they’ll let me, even though they’re both tearing through YA fiction almost as fast as the books get published…)

I just wish there was more.

I can remember an interview George Lucas gave in 1983 right around the time of the release of Return of the Jedi when he said that even though he’d originally planned there to be nine Star Wars movies, that he was utterly burned out by making them and he had no plans to do any more. And I can remember that at the time I felt a bit disappointed, but I simply said to myself that if Lucas didn’t have it in him to create more stories in that universe, then I would. I, and countless others. The universe seemed so deep and rich with possibility that I didn’t for a second accept the idea that those characters and stories would end whenever Lucas decided he wouldn’t or couldn’t make any more. And I know for a fact that there are a great many filmmakers my age who got into this industry as a direct result of wanting to make more stories like Star Wars.

Even though the Discworld stories mostly take place on just one (flattish) planet rather than an entire galaxy, that multiverse is still just as rich with potential as the Star Wars one… more so, if anything, due to all the genre-crossing play that Pratchett did in his world. When I think of the slippery cobbles of Ankh-Morpork, the gleaming icy spire of Cori Celesti, the windy villages of the Ramtops, the ancient history of the Chalk, or the unexpected mysteries of Klatch, XXXX, and the Counterweight Continent, or when I visualize Vimes, Nanny Ogg, Vetinari, the Low King, our favorite Igor and his dog Thcrapth, and a certain blue-eyed skeletal manifestation who couldn’t speak lower-case letters if he tried (AND WHY SHOULD HE?), I remember all their stories, and it’s easy for me to imagine many, many more, involving all these locations and the heretofore unmentioned spaces in between, and populated by these timeless, iconic characters and all the wonderful as-yet-unknown people and creatures that live and die and haunt and Morris-dance among them… it’s so easy to dream of more Discworld adventures, romances, terrors, and laffs.

But when I think about how those stories might be realized in any media, written down for others to savor and enjoy, I feel pretty bleak indeed. Since, in a way I haven’t felt since Douglas Adams died, I believe to the bottom of my soul that nobody now lives who could do it. Certainly I could never do justice to Pratchett’s writing. And I don’t think anyone else could either.

So yeah, we can get new Star Wars stories until the cows come home, there have been hundreds of perfectly serviceable Sherlock Holmes adventures conceived and written in the 85 years since Arthur Conan Doyle died, and, if anything, the Conan and Cthulhu Mythos stories have only gotten deeper and richer since Howard and Lovecraft passed on.

There’s still the collection of Terry Pratchett essays and speeches: “A Slip of the Keyboard” 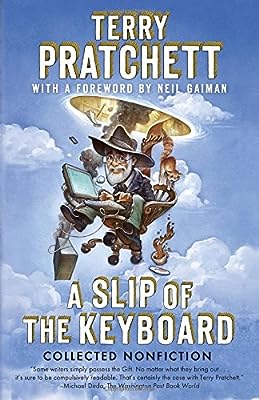 A Slip of the Keyboard: Collected Nonfiction

A collection of essays and other non fiction from Terry Pratchett spanning the whole of his writing career from his early years to the present day Terry Pratchett has earned a place in the hearts of r ...

As you should! keep reading to them!

Our mom read to us way past the ages when it would have been just as easy to read to ourselves. It was a wonderful ritual, so full of love. It’s a shared experience.

Still, even thought I’m 40ish, I’ll sit and listen to her read Dr Seuss or whatever to my nieces, when I am around. It’s just nice. I re-read A Wrinkle in Time a few years ago, and I heard everything in her voice, even though it’s been 25 years since she read it to us.

Did you ever read And Another Thing…?

If not, you lucked out. Although, to be fair, I kind of wish I hadn’t eventually read Mostly Harmless either.

Confession: I didn’t even start reading Terry Pratchett’s work until after his death, so I still have 30-something books to go. I’ll check back in then.

As well as A Blink of a Screen. I picked this up used, thinking that I had somehow missed it over the years… Nope. 2015. 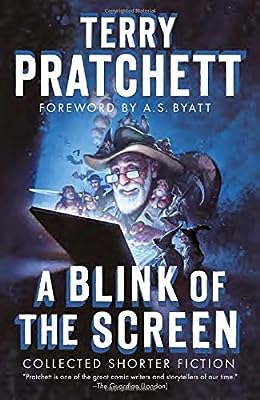 A Blink of the Screen: Collected Shorter Fiction

The first career-spanning collection of short fiction by Sir Terry Pratchett—one of the most beloved and bestselling writers of our time—A Blink of the Screen charts the development of Pratchett’s cre ...

Yep, definitely cried at the end.

If you haven’t delved into his non-Discworld stuff, it’s all pretty good! I’m about halfway through his Long Earth series w/ S. Baxter, and while it’s a not pure Pratchett, and it’s no Discworld, it’s a pretty good little adventure (I may be the only person who hated Good Omens, so, I mean, maybe take that opinion with a grain of salt haha)

I’ve been enjoying the Long Earth series, as well. Not in the same league as the Discworld, but the characters are likable enough to want to keep reading to find out what happens next to them

You know, I’ve had long run of “Really, Internet? Really?” experiences lately. But this is as insightful and heartfelt. Bravo and thanks.

FU (in the kindest, nicest, most appreciative way) Cory for making me cry and making me want to read it even less because I can’t bear the thought that this is going to be the last one. I still can’t read it. Ordered the UK edition to be sent to my home in the States, it’s sitting right next to me right now and I can’t, I won’t open it. (Oh yeah, and thanks for writing such wonderful pieces about Pratchett through the years, especially after his death)

Thanks…I actually thought that was the 'British" title of the same book. “Slip of the keyboard”. and not a stand alone book.

Terry said the one person he’d be happy taking on the series is his daughter. Read it with that in mind and it works on so many levels.

(She’s said she won’t - her choice, although I would have loved to see her try. But what pressure)

I wish there were more. More than I can put into words. But I am also glad he went out on a high - one of his best I would argue.

Tissues needed. If the dedication doesn’t get you chapter 2 will.