Originally published at: "The Flinstones On The Rocks" was a 1-hour special that aired just once then disappeared | Boing Boing

“Winston cigarettes were sponsors of such television series as The Beverly Hillbillies and The Flintstones. The former series would show stars Buddy Ebsen, Irene Ryan, and Nancy Kulp extolling the virtues of Winstons while smoking them and reciting the jingle.” 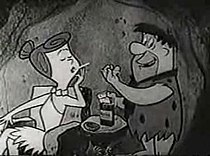 "Winston tastes good like a cigarette should" is an advertising slogan that appeared in newspaper, magazine, radio, and television advertisements for Winston cigarettes, manufactured by R. J. Reynolds Tobacco Company. Reynolds used the slogan from Winston's introduction in 1954 until 1972. It is one of the best-known American tobacco advertising campaigns. In 1999, Advertising Age included the "Winston tastes good like a cigarette should" jingle in its list of the 10 best radio and television jin...

This episode was co-directed by Dave Smith, who is now a director at DreamWorks Animation. He was the storyboard artist who was responsible for the “Are We There Yet” sequence with Donkey in Shrek 2 (among many other great bits) He’s been directing on the Trolls Features and remains one of the funniest people at the whole studio. I’m so grateful Mark found this, as Dave showed me the episode on VHS back in 2001 and I’ve had nothing but fever dreams about it since. Yay!

professional image to the original voices rather than flat mimicry

i don’t think that saying “it wasn’t meant for kids” is accurate. like the Simpsons, it just works on levels that both kids and adults can enjoy.

Hard to believe the ‘mancave’ hadn’t been invented yet.

In some vault resides the masters for a Wu-Tang Clan album, the Star Wars Christmas, Flintstones on the Rocks, and The Day the Clown Cried.

What a magical place that must be. … oh ya… and Trump’s pee tape.