The Flying of the Freak Flags

While discussing a somewhat acrimonious issue I encountered a comment that the boingboing community used to be weirder. I have no historical perspective on that, but I’m pretty sure we’ve got lots of weird people around here and it just doesn’t come out in the conversation.

This is a place to run your freak flag up the pole and proudly state your weirdness. As such, I’m putting out a couple of rules:

Of course starting this thread feels weird to me because I don’t know what to say about myself. Probably my most weird features are mental health issues that I wouldn’t say I’m proud of. Still, I can put up a few things:

Pretty tame for now, but if the discussion actually takes off I might have more to say.

Nonbinary gendered, ambivalent and fluid about what space I am in within that description but not unhappy with being there.

Formerly a Kemetic Orthodox priest, now a sort of general sort-of-agnostic/sort-of-animist/sort-of-pantheist/pagan sort. Kind of as vague as the first bit now that I think about it.

I love weird socks. I used to wear exclusively socks with toes (between wearing tabi while playing taiko, and often wearing Vibram Fivefingers) but I just settle for odd colors combinations, patterns, etc. The latest pair are mermaid scale socks, which were a little bit disappointing.

I do have kind of a thing about mermaids. Clan MacLaren folklore claims at least one mermaid in the genealogy, and “it’s your mermaid heritage” has become a standard teasing item from my spouse.

Electronic musician, creating stuff without regard to genres. Some of my stuff is easily classified as ambient, some drone, some noise, some powernoise, some is probably some sort of jazz, none of it is trance/techno/EDM/flavor-of-the-month. Some is definitely experimental, some less so. My main hobby. I finished 119 tracks and 2 remixes last year and I’ll probably sail way past that this year, and in previous years, self-released 15 albums under three artist names.

I also performed with a taiko drumming group for about 18 months. I quit because it took too much time away from my own music making. Also, while I was better than average at improvisation, I found the choreography aspects of it frustrating. (I have sort of mixed-up proprioception where it comes to certain kinds of movements, possibly related to my poor sense of direction/navigation when traveling.)

Non-sports-liking, non-TV-watching, introvert geek. Not that this is weird by internet standards of course.

Former game developer, but I worked for the same company for 17 years. I did everything from rebooting a stubborn web server every 20 minutes for a 12-hour shift, to creating fantasy languages, to accidentally writing a script that set a player character on fire an infinite number of times, to implementing an online, real-time, multi-user terrain editing system with different erosion models, to writing loading screen music.

I most likely have Summer SAD (heat, humidity, and bright direct sunlight all make me very irritiable and twitchy).

Oh, and Green / Socialist, which I guess is weird in the US. A bit frustrated with the Green Party in some ways and… not going to talk about politics except to keep a middle finger extended toward Washington (and/or NYC) for the next four years.

I can’t even explain the ways in which I’m weird. I just am.

I don’t feel nearly weird enough but I really want to help this thread so I’ll try and come up with what I can.

I’m a middle aged stocky guy often with a full beard that gets called ‘ma’am’ all the time.

I’ll try to think of more later, tune in for updates!

Back already! I find this kind of an odd question, not that it is an odd question but my interpretation of it makes it one for me. Most of what makes me a “freak” doesn’t feel freak anymore because I’ve become socially irrelevant enough it’s easier to be personally okay with my idiosyncrasies, and I’ve had the luxury of structuring my social groups to peers who are mainly tolerant of me. A lot of that, unfortunately, has its roots in isolation rather than discovery.

Back to the fun:

My speech tends to be quite different from my writing, in that it is more formal and full of anachronisms. I spent a lot more time with 19th-early 20th century authors than I did people, as a youth, and my diction often confuses people.

I don’t particularly care that my counters are cluttered.

In fact I’m fascinated by what turns other people on.

I could kill a human for breaking into my house, but I couldn’t kill a bengal tiger or mountain lion in self-defense, because it simply wouldn’t be worth my life to destroy such a beautiful thing.

I was more devastated by the death of the beagle puppy in John Wick than I was of the mountain of bodies Keanu left in his wake, though I suspect I wasn’t alone in that respect.

I’m a middle aged stocky guy often with a full beard that gets called ‘ma’am’ all the time.

It’s the dress, but that’s okay. Cerulean is a good color for you and really brings out your eyes.

You stole half my list, but that’s okay, it just lets me know I’m in the right place.

Oh, another one: I’ve been described by two different people as being “in the right room, but wrong building” and took it as a compliment.

their experience of it has been a weirding experience

I collect (and have recently started creating) feghoots.

My speech tends to be quite different from my writing, in that it is more formal and full of anachronisms. I spent a lot more time with 19th-early 20th century authors than I did people, as a youth, and my diction often confuses people.

I’m the other way around.

My written word is formal and often comes across as stilted or insincere, but I speak much more casually in oral conversation.

It seems the case for most people, which is why it’s odd.

Sadly, those patterns do seem to be conforming more and more as I age.

I collect insane rants. The carefully hand-written kind that people staple to telephone poles. The kind that when you see someone posting them, if they notice you noticing them, they’ll throw the remaining papers in the air and run away weeping or screaming incoherently.

I read them carefully and thoroughly, and periodically re-read them. I wish I had a lot more.

I wish I had a lot more.

Probably not quite what you’re looking for, but… 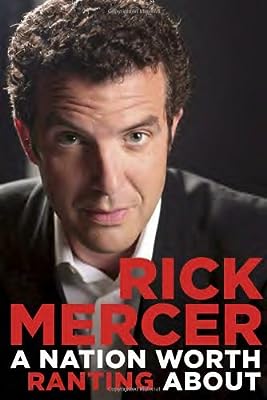 An all-new collection of furiously funny rants from the most recent seasons of the Rick Mercer Report plus three brilliantly written, previously unpublished pieces by Rick. Illustrated throughout with ...