The goodies in my menu bar

RE: Spotlight. Are you using Alfred?

Quicksilver kills Spotlight. Super-simple, addictive once you start using it, command-space launches any program or document. It’s customizable but I use it simply.

+1 for Quicksilver. It’s the first thing I install on a new Mac (don’t forget to update the shortcut; use system prefs to make Spotlight something other than Cmd-Space).

Crazy customizable. Hotkeys for everything I do multiple times per day.

You may want to check out QuickRes - adds back in the resolution setting options that apple took out of the Displays Preferences and sticks them into the menu bar. If you need to switch resolutions on a regular basis, you’ll love it. http://www.quickresapp.com

I don’t use spotlight all that much but when I do, it always shows me exactly what I’m looking for within a few keystrokes (I primarily use it to launch applications that aren’t in my dock, but also to find documents etc.)

So I am curious about what problems Mark has with Spotlight, and also what advantages the Alfred app might bring. I remember using Quickilver as others have suggested a few years ago to replace or supplement Spotlight, but I can’t remember why because Spotlight seems fine (it didn’t used to be as good, granted, which may have been why I looked for something to supplement it). It looks like Alfred has a bunch of neat features, but if I’m honest, none of them look like things I’d ever really use.

On a different topic, the Airmail app looks like exactly what I’ve been looking for. I just recently switched to Apple’s Mail app for the first time - when I first switched to a Mac I carried over using Thunderbird from Linux, but it was slow and buggy, so I switched to the great Sparrow app (meant primarily for gmail), which Google bought out and then killed and which despite receiving no updates eventually stopped working altogether for some reason, so I switched to Inky, which is OK but needs a lot of work IMO (unnecessarily quirky, it’s in beta though, understandable) and uses a lot of system resources.

So I switched to Mail for simplicity a week or two ago and it’s perfectly fine, but not as nice as the things built for or based on gmail. Airmail looks like it’s very similar to the Sparrow design philosophy I liked.

Some other stuff in my menu bar:

Chrome notifications - this doesn’t seem to work for me either

fl.lux - makes the screen colors warmer at night. Happens gradually at sunset (based on your location) and your eyes adjust and you really don’t notice, but it’s noticeably less straining. I’ve been using it for years and I notice immediately using other peoples’ computers at night that they’re bright and hurty. Disables automatically when you switch to programs of your choosing (like photoshop/lightroom for me).

Caffeine - clicking the icon fills the mug with coffee, and then the computer won’t turn the display off or go to sleep etc. for an hour (or a default of your choosing, or select a different amount of time from the right-click menu). Very useful.

MiddleClick - this is a background process that turns a three-finger touchpad tap into a middle click, for opening new tabs etc. There are more advanced gesture apps that do the same and more and I’ve tried them, but they’re less reliable (i.e. they don’t actually work half the time you try to do a gesture, which is annoying and frustrating) and this is the only thing I really want on top of the built-in stuff anyway. I open about a million tabs a day using a three-finger tap instead of having to hold down a keyboard key.

I have a network status, CPU and RAM monitors (with a drop-down menu showing what’s using the most resources - I check these constantly when things are running slow to see what the culprit is), and a better battery monitor, these come from iStat Menus. Apparently I’m on version 3, which IIRC was free, and version 4 is now $16. I do use it all the time but not sure I’d bother paying for it on a new computer… there are a million other features you get for that $16 that I don’t actually use myself.

I get twitchy when I have more than 2 icons up there.

And Spotlight does everything I need it to, and it’s nice to get good functionality out of a computer without having to scour the internet for someone’s theory on how to make it “better.”

Bartender is awesome. worth the cost, by far.

This post only cost me $15.00 for Divvy which replaced Spectacle…

I get twitchy when I have more than 2 icons up there.

Anything that makes me feel like I’m turning into Steve Wozniak, gods bless him, scares me a little bit. 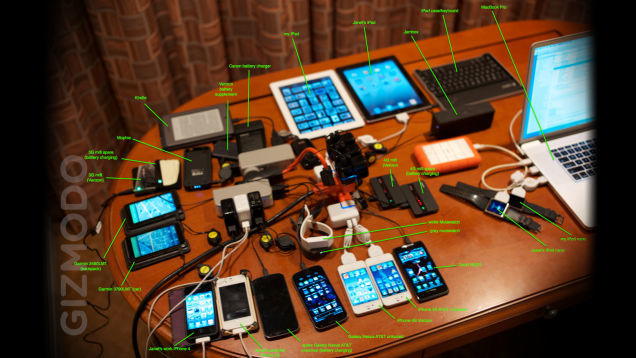 +2 for Quicksilver. A co-worker turned me on to it a few years ago, and it’s infiltrated my life to the extend that I automatically try to open it on any computer that is in front of me (which is a lot, sometimes, since I help out our helpdesk).

Holy crap, and that is his travel backpack?

Ah yes, mock shock. As if you’ve never seen this picture before.

I never said it was his travel backpack.

I am going to blow your mind here…but rather then have multiple menu bar rows ugghhh, why not be able to rearrange and group your menu bar items by function, and hide the ones you don’t regularly use, yet be able to expand and use the hidden ones any time? Fully managable and functional menu bar control. Sound too good to be true? It isn’t, welcome to MenuBar ReArranger 2. You can even drag and drop resort the items with the free Barroom addon.

Rearrange, group, hide, show menu bar items:
http://www.seense.com/mbra/
(I am not affiliated with the above company, just a long time user.)

I find ClipMenu indispensable, for high efficiency cutting / copying and pasting. Also, if for example, you have multiple Social Media accounts and use more than one browser to help manage, Choosy is a great app to handle that. Every time you click on an email link, for example, you get to pick which browser it’ll open in.

I used to use Google Drive, now I use Docs on the web so I don’t have Drive cluttering my menu bar. For file syncing on all my devices I’m using BitTorrent Sync.

I use Bartender too! Not to have a second row of menu bar items… but to be able to hide most of them.

It lets me go from this

by just clicking that star. Nothing but the stuff I care the most about when I’m out and about trying to get some work done: the current time, my battery status, and a quick way to see what program I’ve been in lately.

Instead of knowing the name of all the apps I would be far more interested in the reasoning of having them in the menu bar… For example, what is the benefit of having Tweetbot using up space if you could just keeping it in the dock?