The LA Times fired a journalist after cops told them he lied—but did they investigate?

And then Ted told the whole room a story that blew our minds. He said that a few years earlier, he had gotten into an altercation on a subway platform with a vagrant. A physical struggle ensued and Ted ended up either pushing the guy or he fell onto the tracks. And the train came, presumably killing the guy. Ted told us this in a very matter-of-fact way.

We all asked him, “What the hell? What happened to the guy?” And Ted replied that he didn’t know what became of the guy and had had no choice. All of us were aghast.

The hell was that???

I can understand this guy’s work not being to everyone’s taste (depicting the widows of 9/11 victims as gold-diggers? AW YEAH SPEAK TRUTH TO POWER, BRAH), but even the article ostensibly defending him makes him sound like a colossal asshole.

Point being, if so, he was an asshole loooong before the LA Times hired him.

I guess people hire Ted Rall because they like the idea of hiring Ted Rall. But then they realize they’ve hired Ted Rall, and that adversarial journalism is more than merely a good look.

Of course, and the LA Times owes him an apology and a published follow-up, at minimum. I don’t know what he’d realistically be able to get in terms of compensation for wrongful termination, but he’s certainly entitled to pursue that and I would encourage him to.

But “habitual asshole with known history of controversial statements (some leading to past terminations) makes controversial statement, is disbelieved when challenged because everyone knows he’s an asshole” isn’t particularly shocking to me. In an ideal world, yeah, the Times should probably have had his back. In reality, I think the impulse to take an asshole’s account of an event from more than a decade ago with a grain of salt is an understandable one.

I got the impression that most US media back the powers that be rather than challenging them if the chips are down - Pravda-Style. It was disgusting to watch during the build-up of Iraq War 2.0. It seems that often there is a certain collusion between journalists/media and governmental sources. You don’t bite the hand that feeds you easy "pre-masticated"information/press releases/whatever because otherwise you have to work hard for it.

Hey! Nice media conglomerate choo got dere. Be a real shame if somet’ing were to, y’know, happen to it. Real shame. Badda-bing!

I really like Rall’s work. Seems like another step towards sanitizing discourse and turning everything into anodyne shit. Maybe they’ll replace his strip with Beetle Bailey or Ziggy.

Ted Rall is generally difficult to defend. But his book “My War with Brian” is the definitive graphic novel on the subject of school bullying. And it works because he doesn’t mince around the subject.

To my everlasting disappointment, I’ve discovered that sometimes “it takes a village” and other times “it takes an asshole.” The job of editorial cartoonist takes pretty thick skin – write an scathing editorial and you’ll get angry letters, draw an incendiary cartoon and people will…well, we all know what they’ll do.

Ted Rall is generally difficult to defend. But his book “My War with Brian” is the definitive graphic novel on the subject of school bullying. And it works because he doesn’t mince around the subject.

Oh man, Ted Rall. He’s smart, he’s funny, he can draw, his politics* are mostly fine by me (although I think he’d be a bit embarrassed at how non-radical that makes him), and you’re right, in our imperfect world sometimes you need bomb-throwing assholes to move the discussion along.

But HOLY CRAP does he creep me out when it comes to his own life and experiences, and I’m basically going on nothing other than what he’s written. (Haven’t seen the bully book–maybe that would shed some light.) The way he describes his interactions with the world is kind of breathtaking sometimes. It’s not just that he’s always the smartest person in the room (hey, a lot of times he probably is) but everyone he encounters is surly and cruel, which justifies the inevitable confrontation. I can’t really do justice to it.

I’m not qualified to medically diagnose him, and anyone is free to take my internet commenter opinion for what very little it’s worth, but on a very few occasions in my life I’ve gotten that message from a specific part of my brain that says danger, this person is deeply broken, retreat immediately and it’s never come across more strongly than from this guy I’ve never even seen in person.

So do I find it hard to believe that someone (even a white male non-transient adult) could get hassled by an LA cop for no reason? Absolutely not. Can I conceive of a big media company being a cowardly dick to a troublesome employee? You betcha. But either he’s the single most persecuted motherfucker on the planet, someone who makes Harrison Bergeron look like a pampered loser, or example #19257 of shit going down because some fascist tried to step to Ted Rall should be viewed in light of all the other such stories. And I don’t mean to suggest for an instant that he doesn’t believe every word he says.

*to clarify, I’m talking about the general leftish/Tom Tomorrow and Ruben Bollingesque political valence he assumes in his cartoons these days. If he’s still throwing in nakedly racist and anti-poor rhetoric like he did in his late 1990s/early 200s essays, fuck 'im.

As he was never an employee but a freelancer what sort of wrongful termination did you imagine he could claim for?

I listened to the enhanced tape and I don’t hear what Rall and Palast hear (and they seem to hear different things).

As for the ad hominems already piling up here: whatever, since he does appear vindicated here.

That said, this intriguing-in-an-icky-way book did make me wonder what he’s been through in life: 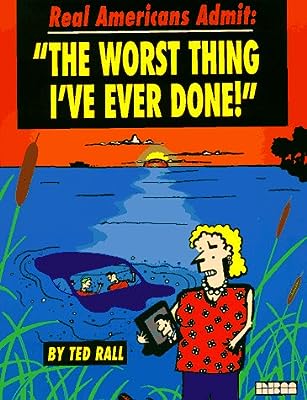 An hilarious compilation of true stories as related to Ted Rall by all sorts of Americans. You won¹t believe some of the outrageous -or pathetic- things we all do and get away with! Ted Rall is a synd ...

Ted Rall’s drawings are wretched, his writing’s often incoherent, his political thinking is neither sophisticated nor original, and he seems to have an unfortunate tendency to make shit up. The question is not “why did this or that media outlet fire Rall,” but rather, why would they hire him in the first place?

To those who find it hard to believe that Rall fudged facts in his Los Angeles Times piece, I suggest that you read this brief Rall v. Hellman deposition excerpt from March 2000, in which Rall admits under oath to fudging facts in a piece he wrote for New York Press, as well as in the aforementioned memoir “My War With Brian.”

Ted Rall’s “My War With Brian” might qualify as the “definitive graphic novel on the subject of school bullying” if large portions of it weren’t made up. Rall admitted that the memoir was substantially fictionalized in this March, 2000 deposition.

Interesting. I thought it was entirely fictional.

“Entirely fictional?” Then it couldn’t be called a memoir.

Doesn’t matter if you’re right. All that matters is that everyone else is a coward and would rather save their own necks than have your back.

True, for some reason I was thinking he was an employee. I guess if the Times’ comment provably leads to him losing work he would have otherwise gotten from other clients, he might try a libel case? (Just speculating. I’m not even qualified to be an armchair lawyer.)

Seems unlikely that even if he’s vindicated he’ll work for the Times again, given the bad blood from this incident.