Originally published at: The Marvel Cinematic Universe is going to focus on "quality over quantity" in the coming phases | Boing Boing

Mixed quality of the MCU’s Stage Four aside, Morbius wasn’t part of it. That was produced by Columbia and is in Sony’s Spider-Man Universe.

Well that all definitely mirrors what I’d been thinking lately. More has not proven to be better. Quality counts, not “how many quippy characters can we shove out in one year?”

Also, @jvsquare is 100% correct, that’s not a Marvel movie, it just features a Marvel character. So, shouldn’t be counted as part of the MCU.

Mixed quality of the MCU’s Stage Four aside, Morbius wasn’t part of it

I didn’t realize stage 4 was over. I thought it ended with whatever Kang will be doing.

While it was DC and not Marvel, maybe they can spin it off as an “Elseworlds” kind of thing, in that when DC did the elseworlds books, they were generally fairly polarizing and hot/cold on sales because they appealed to a much smaller demographic.

I mostly disliked that I was forced to watch the TV shows to have half an idea of what was going on.

I didn’t realize stage 4 was over.

So did I but it apparently looks like phase 4 is only things released in 2021-2022 and phase 5 will start next year with Ant Man Quantumania.

To me the “uneveness” of phase 4 was that things were starting over for a lot of things and felt more like phase 1. That and so much of it being in the TV shows we got smaller more character driven stories. We just didn’t really get an end chapter to phase one like we did with the first Avengers film. Also, so much was setting up new characters and place setting them for the next phase.

I’ve still been happy with the results myself. Eternals withstanding (I enjoyed it, just wish it was a series and not a film so it could really explore everyone better and all their time on earth)

I see this as a “Bob Iger’s back” and the old blank checkbook to Marvel and all in on D+ and Marvel is out.

I’ve still been happy with the results myself. Eternals withstanding (I enjoyed it, just wish it was a series and not a film so it could really explore everyone better and all their time on earth)

Completely agree. It would have made a great TV show. As a movie, I got really really tired of a new person showing up on screen and immediately providing backstory. Just over and over.

One thing that stuck out to me about Eternals was that it canonically established that the DC superhero franchise is a thing that exists within the Marvel Cinematic Universe, even going so far as to suggest that Ikaris was the inspiration for Superman (whereas in reality it was obviously the reverse). The recent Guardians of the Galaxy Holiday Special expanded on this with Kevin Bacon doing a silly Batman/Bruce Wayne impression.

So I guess people who live in a universe populated with actual superheroes still read comic books about fictional superheroes? I wonder if the people in the DCEU read Spider-Man comics.

So I guess people who live in a universe populated with actual superheroes still read comic books about fictional superheroes?

That’s a lot less weird than Nick Fury/Mace Windu making jokes about Star Wars to Spider-Man and Iron Man making Lebowski jokes when his mentor was played by Lebowski himself.

At a certain point the cinematic universe just gets so big that everything starts to get very meta.

I remember when Earth-One read Earth-Two. 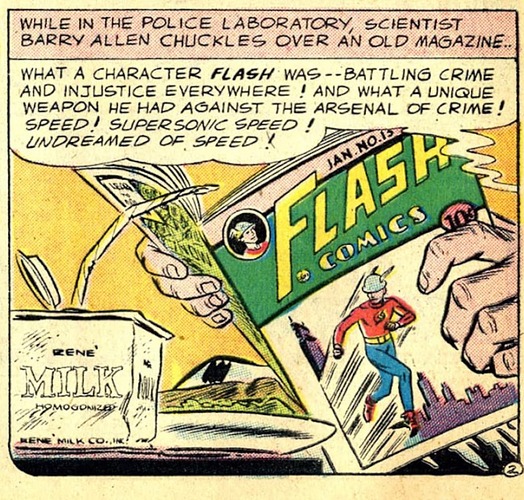