But can it complete the Kessel run in… In the initial film, Solo brags that the Falcon made the Kessel Run in "less than twelve parsecs". As the parsec is a unit of distance, not time, different explanations have been provided. In the fourth draft of the script, Kenobi "reacts to Solo’s stupid attempt to impress them with obvious misinformation". In the Expanded Universe, the Kessel Run is a pathway from Kessel past the Maw Black Hole Cluster: used by smugglers to transport precious Glitterstim spice; and Solo's bragging refers to The...

Can it do the kettlebell in 40 quadriceps? Or whatever?

Wow! I’m gonna get that big-ass one for me and my kids! I would have thought it’d cost more than that. I’m pretty surprised the paint looks so… well, it looks like it needs paint. Almost like you’re buying a new YT-1300 and you have to apply your own “special modifications” and battle scars yourself. Which I’m okay with. I just thought Air Hogs would have put more effort into the aesthetic.

But that’s okay! The flying bit is the important part.

But that’s okay! The flying bit is the important part.

It is really a looker!

The guy on the beach was flying it really smoothly, but there was almost no wind, and he said it has a learning curve as the batteries do not last all that long.

That said he was doing a pretty good job of it. I was also told the little one is great for indoor, but even a breeze outdoors will upset it.

most reviews are along the line “does not lift off”, so it will take a while…

It is really a looker!

I was just going by the linked commercial, wherein it looked like mostly unpainted plastic, although the lights look great. Glad to hear it looks better in person! I wonder if the guy on the beach painted it?

Anyway, I don’t mind a little painting time as well as flying time.

Glad to hear it looks better in person! I wonder if the guy on the beach painted it?

It looked all factory out of box to me, but I do not know. You have to be willing to accept things like the props being there, but I think it looks great.

Most Air Hogs stuff is pretty attractive, and built to not disintegrate. I use some of the RC boats out on the Pacific Ocean and as long as I rinse them off I usually get 1-2 years operating in salt.

We gave the little one as a present to a family member last Xmas. It is a blast indoors, and it is worthless outside.

I guess access to the soundtrack didn’t come with the licensing rights. It sounded like someone searching for their favorite part.

Cool toy though. Back in my day we had to manually pick our toys up to make them fly. But they did have LED lights on them that were dear ringers for lasers.

Remember the single, solitary, sad little red LED on the nose of the Kenner X-Wing? Rather than on the four actual laser cannons at the ends of the S-foils?

That said, I had buckets of fun with mine. At some point, one of the S-foil pairs broke in the middle† and so I ended up inserting both top S-foils into the wing-slots at 45-degree angles, fabricating an extra-long front landing skid out of black sprue, and painted the whole X-Wing glossy black. It looked awesome.

† The upper-left S-foil and the lower-right one were a single piece, as were the lower-left and upper-right pair. Pressing down on R2-D2’s head behind the cockpit forced the pairs apart into the familiar X-shaped “attack position.”

and even happier to find out there is a smaller, 10" version that don’t doesn’t cost an arm and a leg.

Fixed it for 'ya.

You guys all need to get out more. This is so last Christmas. Except @critter; he’s with the hip crowd.

So, I have this theory…

The Kessel Run goes through a dangerous part of space, full of physical and navigational hazzards which are most densely arranged at the center.

Most pilots take the long way ALL the way around. Seasoned pilots will shave some time off that by skirting through the edges for a shorter trip. Only the most reckless, lucky, or superhumanly skilled pilots could even attempt to go the shortest distance between two points.

So the shorter a distance you travel, the more bragging rights you have.

That’s… actually pretty close to the canonical explanation (back from when the Expanded Universe was canon): 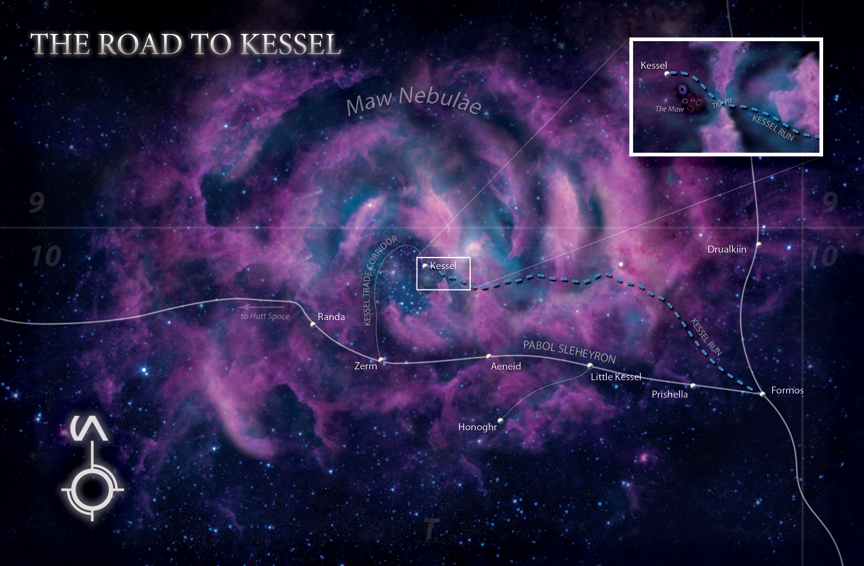 The Kessel Run was an 18-parsec route used by smugglers to move glitterstim spice from Kessel to an area south of the Si'Klaata Cluster without getting caught by the Imperial ships that were guarding the movement of spice from Kessel's mines. It took...

Excellent. I shall now enjoy a smug sense of superiority until tomorrow’s soul-crushing electoral apocalypse.

Oh yeah. I totally forgot it had just the one LED. I guess my fertile imagination (or my fading memory) made me remember it as 4 lights on the wing tips.

Remember the single, solitary, sad little red LED on the nose of the Kenner X-Wing? Rather than on the four actual laser cannons at the ends of the S-foils?

And the little reeeen! reeeen! noise it made that was clearly a bit of plastic against a DC motor with a gear on it, inside.