While I am cautiously optimistic, I SURE hope a lot of the CGI in there is temporary comps because…yeeeesh…It’s pretty bad…Especially Namor jump / flying and stepping on things. VERY cartoony and…pretty darn bad.

And I guess from now on how we say Namor will no longer be NA-mor, but na-MOR?

Whatever. I mean, it’s supposed to look and feel like a comic book. When I was a kid Ray Harryhausen still represented the state of the art in special effects and we were still able to enjoy the escapism of cinema even if we didn’t think the fighting skeletons and giant Kraken were real.

Anyway there’s no way they could have made Namor’s ankle-wing-enabled-flight convincing because the entire concept of ankle-wings is ridiculous even by comic book standards.

I can’t say why, but for some reason the Scarlet Witch and Dr Strange hovering using magic and Vision flying and phasing though solid objects using unspecified “technology” is still less distracting and suspension-of-disbelief-breaking to me than seeing Namor using winged feet. It shouldn’t be, but it is.

I guess growing up seeing Superman and the like just makes that form of flight normal to me, but I haven’t seen much winged-foot flight on film before with the exception of an animated Hermes in Disney’s Hercules. 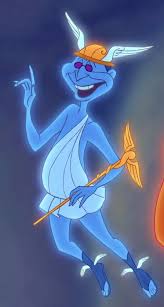 …and every time someone says “…well…It’s comic books stuff. It SHOULD be cartoony…” I think of ALL the DECADES of MCU movies, and so many OTHER movies I COULD point to, where they did the effects WELL, took it seriously, spent time doing it RIGHT, and where in those movies I have almost ZERO complaints about the effects. (script issues, maybe…FX issues? not so much)

It makes me wonder about the movies that someone watched…

TL;DW: Exploitation, overwork, and sweatshop conditions are the source of “bad” vfx these days. It’s not laziness on the part of the VFX artists.

I think of ALL the DECADES of MCU movies

The first MCU movie was Iron Man in 2008, which was less than a decade and a half ago.

And yes, there were some cartoony parts in that one too.

I used to work in the film industry. I did props, miniatures, flim FX, makeup FX, and even owned an FX studio for about 6 years.

I work in the toy industry now and I occasionally get people asking me why I left the film industry.

The video you posted? Yup…Spot on in all the ways.

I did SOOOO many bids and studios were REQUIRED to take the middle / low bid. I cannot count HOW OFTEN those companies / bids that won ACTUALLY went back to the producers and asked for more money to do the shoddy shit they made and by the time they were done, the producers had spent 1/3 - 1/2 MORE on their crap…

Occasionally, I would do a bid and then subtract 20 percent and submit JUST TO GET THE JOB, and barely make money to keep the doors open, so…yup…

Sold the company and I don’t do that thing anymore.

I miss a GREAT deal about the industry, but I DO not miss all of the things the video points out.

(…I still hope they fix those shots…yeeeesh…)

Comic, yes…Still manufactured and executed well. The comic nature of THAT shot was a choice and for ME, I think it worked very well and 95 percent practical, with sped up / altered footage, and done SO there could be a contrast LATER when his flying actually worked so…

Personally, not the best choice of scene to prove your point to me…

Now if you had chosen Iron Man II or III for your point? There was LOTS there to talk about…

Yep. I work in an FX-adjacent field, using most of the same digital tools as the FX houses use. People often ask me why I don’t move out to LA or Vancouver and get a gig in VFX. The reasons pointed out in this video are what I give them.

Man, this trailer gave me goosebumps, and that shot of Shuri dropping in the Black Panther armor at the end damn near made me cry, and y’all are arguing about how good the CGI is or isn’t. Ugh. I think the MCU has caused expectations to be set high, because it’s done so much better than most of the superhero films before it, when it comes to special effects and making things look like they’re “realistic” enough for our universe. And we expect each movie to look better than the last. And then we judge teaser trailers. And then we judge trailers. God, I’m just still giddy that these movies get made and don’t look like Superman 3.

That being said: Marvel…pay your damn SFX people what they’re worth, even if you have to make us pay more to see the movie.