This one shows way too often. “He had a fiancée, but she died.”

“I should say, Mr Senator, that a pixie is a close relative of a fairy.” Army counsel Joseph Welch responding to a question by Senator Joseph McCarthy.

"As part of a sting operation last month, an undercover police officer and an associate of [his] met [him] at a restaurant near Dupont Circle, and [he] invited them back to [his] apartment to use cocaine."

They should just stick this sign on a picture of the person. People will know what they mean. 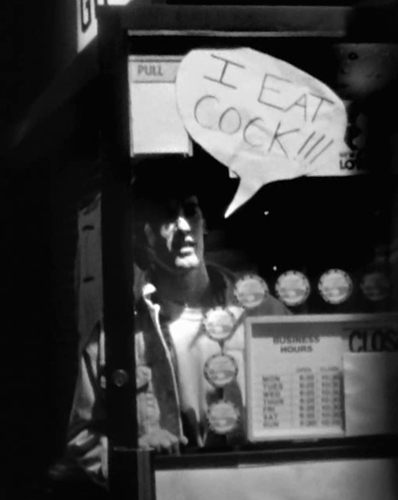 Gawker didn’t do anything. Hypocrisy always deserves being outed.

Anyway, either homosexuality isn’t anything to be ashamed of. It’s time stop treating it like it is.

Somebody needs to write a “New York Times Euphemisms for the Word ‘Fuck’ Generator”.

Anyway, either homosexuality isn’t anything to be ashamed of. It’s time stop treating it like it is.[/quote]
You don’t avoid outing people because it’s something to be ashamed of. You avoid it because they could lose their jobs, homes, family, or get fucking murdered. It is their risk to gauge and their decision to make, not yours, the Times’, Gawker’s, or anyone else’s. (And please don’t jump to “oh, that doesn’t happen in New York/DC/whatever” or “any family who’d disown you over being gay isn’t worth having,” because, again, it’s not your decision.)

Outing someone without their permission is always a dick move. Gawker just published a pissy defense of outing people, therefore fuck Gawker.

Is the Times also hypocritical about it? Sure. But for Gawker, which has is and has always been a dedicated gossip rag, to come on all haughty about gossipy articles is pretty fucking rich.

Or how about this for a summary of my reaction:

Gawker: “The Times likes to slyly out-without-really-outing closeted gay celebrities. That’s shitty.”
me: “Yeah! You tell 'em!”
Gawker: “They should just out them directly, like we do.”
me: “NO, YOU IGNORANT SHITBAG.”

Wait… I’ve never been married and don’t really like to discuss my private life. If the NY Times writes a story about me, do I suddenly become gay?

I’ve heard this argument, but the glass closet is bullshit, and it always has been.

Let’s look at this specific example here, because this is not saying “Hey Jimmy down the street likes boys!” We’ve got a grown man here that advocates and profits from promoting homophobia (as evidenced from his very public positions and votes). That same man then turns around and says “Hey, I’m going to be as public in DC about being gay, because the dipshits back home, can’t see it.” Now everyone in DC that is cool with institutionalized hate, turns a blind eye, because at least he’s keeping’ the homes down. and everyone that believes in basic human dignity turns a blind eye and says, “Gee if we say something, it might cost him his job of trying to keep institutionalized hate. We better not do that, let’s just dance to Erasure some more.”

But hey, the glass closet worked Ken Melman, and what did he give us, besides homophobic constitutional amendments, and another four years of Bush.

love it, it has many commonalities with the Julie Burchill random recycler, without quite as much homophobia…
http://homepage.ntlworld.com/l_tabraham/jbrr.htm