Some people get paid to go to far off countries and process invoices or clean latrines.

Which are used to support the people who shoot the inhabitants of that country, but yeah, technically correct. 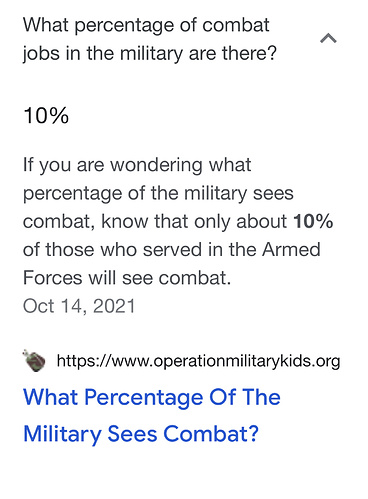 Is a Dr in a combat support role?

I mean, yes they are? Everyone in a military ultimately is. That’s the point of the operation.

Even if they treat the enemy and non combatants?

Of course? Unless they also don’t treat their own soldiers and would also be in the country treating people if they hadn’t invaded it.

Even if they’ve never served overseas?

I don’t know how more clearly I could say this: every single person in the organisation that is explicitly designed to kill people is directly or indirectly a part of the killing.

So your paying taxes makes you a murderer?

And yes, that also goes for the janitors, in case you were wondering

It makes me complicit in as much as living in a modern society makes us all complicit in bloodshed, climate change, institutional racism, etc., yes. However, I have not chosen to be a part of said organisation, so I would say in this instance I am less complicit than those that have. But I definitely am.

If your paying for murder you’re no less guilty. You’re just hiring a hit man.

If I wanted them to do it and freely chose to pay for it that would be an apt analogy.

Lots of people here join the military because their choices are limited also. Abusive families. Racism. No free college etc.

That makes their choice explainable but their profession not more honourable.

Lots of people join gangs or the police for the same reasons.

I guess it depends - I think people volunteering to fight in Ukraine are quite honorable.

I honestly see most of them as adventure seekers. It definitely isn’t the most effective way to help the country.

I’ll listen to the Ukrainians on whether they honor their contributions.

If this was a forum that wasn’t as civil as the BBS and if I didn’t know you from your other posts, I would accuse you of shifting the goal posts through emotional manipulation. We were talking about the members of the American military, a globally operating force tasked with implementing the interests of one country with whatever means necessary, and now we are at an international volunteer brigade in a small country’s invasion, and I am being asked to equivocate the two.

That said, we will probably never know what the Ukrainian government thinks of these people. We know that Zelensky will rightly and cleverly say whatever is needed to get what his people desperately need, as can be seen by his masterful speeches in different parliaments, playing on national self-images.

Okay. My father traveled overseas to fight Nazis in Europe. It took some of the best years of his life & he was wounded.

His service was honorable.