The quest to provide Barbie with a reasonable suit of armor

Needs a spike on the toe to kick chauvinists in the nuts. 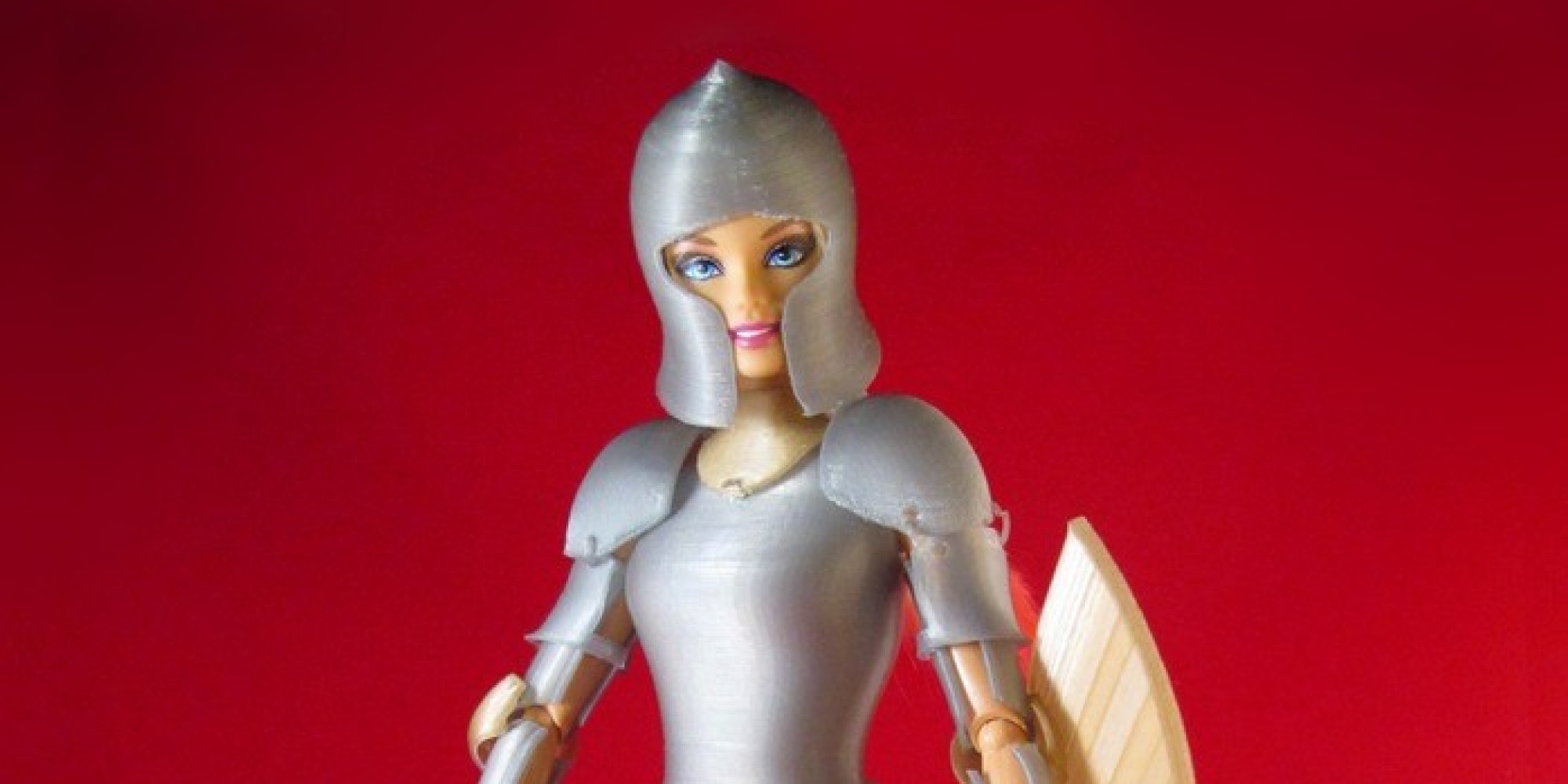 Barbie's about to get medieval on you, and she's got the armor to prove it. A

“Barbie has had many occupations over her long and storied career,” Rodda wrote in the description of his Kickstarter. “Astronaut, veterinarian, pinup, and princess more times than I can count.”

“She has not, to my knowledge, [dressed up as] as Brienne of Tarth until now,” referring to a female knight in HBO’s “Game of Thrones.”

I kind of like this; the juxtaposition of the cheerful Barbie wielding weapons and wearing armor. . .works for me! Needs a horse though. Decked out in horse battle armor with a pretty pink tail! squeals with manly/girlish delight

Uh oh, this already taking a turn toward fetish.

Armor without padding underneath is useless for protection against anything heavy.

Yes, I have to admit that at first I thought the armor was official and the challenge was to provide something more practical than that.

But perhaps that would be asking too much.

Reasonably well fitted plates worn over fatty parts of the body don’t need padding. For example, I don’t need padding over my beer gut if I have a properly sized and fitted plate there - you could hit me with a 16lb sledgehammer and you’d just knock me over. But if you hit me on an unpadded plate over the ribs, the lack of “natural padding” would allow the shock to transfer and crack or split my ribcage or its connecting cartilage.

In SCA combats, I’ve seen very fat men wearing plate with little or no padding taking blows that would have sent me to the hospital. But the only place Barbie has any “natural padding” is her breasts and buttocks… and only the latter is practical to leave unpadded, because the shape of her bust would be near impossible to fit (the edges of breast cups will tend to be driven into the chest armor, and she’s got zero fat everywhere else on her torso so she can’t just use an unpadded single plate cuirass). The rear tassets she’s wearing over her butt are the only place it would be both reasonable and practical for her to skip padding.

So yes, in Barbie’s case she needs some kind of padded jack, gambeson or hauberk under her armor. Preferably an eyleted gambeson with strips of mail sewn on beneath the gaps in her plates (which are necessary in order to get the plate on the doll, of course).

The armor shown also needs a mail aventail and skirt, but it’s actually a pretty damn good start. Kudos to the designers.

She needs a bubblewrap underlayer.

Wow you know your stuff! Once upon a time I had a pretty good idea of most of the pieces of Medieval armor, but those days are long past! Thankfully this looks like real armor, not the glorified glam/goth bikini clad depictions in most fantasy. It’s bad enough that Barbie is so physically distorted but I love this idea! They should do a set for Lammily as well!

Also had to reply that I love your avatar, Avatar.

I got my Avatar avatar from @Kimmo over here but I don’t know if he’s still making them. Unfortunately you probably can’t have Enki-du vanquishing Tiamat with a giant pen, it wouldn’t fit in the space.

It oughta be easier to do armor for Lammily, since she’s more like an actual human being.

Wouldn’t full plate armor like this be debilitatingly heavy for someone with Barbie’s lack of muscle mass?

I expect a Lammily version soon, but since she’s average I suppose it’ll be leather.

Consider the gauntlet, vambrace and cowter thrown down!

I’m a designer dammit Jim! Of course we can fit Enkidu (hairy ape/man/god) with a fountain pen slaying a dragon into 45x45 pixels. Or my name isn’t (expletive deleted)!

You should email the crazy guy making plate armor (and eventually parade plate, whoa) for Barbie to do another set for Lammily. I sense a certain karmic symmetry at play. Check the wards page! There is sorcery afoot!

I’m a designer dammit Jim! Of course we can fit Enkidu (hairy ape/man/god) with a fountain pen slaying a dragon into 45x45 pixels. Or my name isn’t (expletive deleted)!

Sounds like a tall order to me. Show me your chops.

Once in a while I impress myself by attempting something tough and pulling it off… most recent effort:

My favourite bike nears perfection; this is almost how it’ll look when I’m done.

I’m holding out for a real Brienne of Tarth action figure.

Wouldn’t full plate armor like this be debilitatingly heavy for someone with Barbie’s lack of muscle mass?

You’re probably right. The women that I know that fight in armor regularly have quite a bit more visible muscle than Barbie does.