Makes sense. If you can’t get up off the ground, you can’t go mess around with the bombs and get yourself blown up.

I imagine that parts of it have the hardened steel plate inserts. Or possibly the ceramic composites. Either way, it gets heavy.

If the article above is correct and it is 75lbs, Full plate armor back in the day was only ~50lbs (the kind you fight in).

That was me on Friday night, after a bottle of Whiskey.

Boy, that marriage is off to a strong start. Best of luck you crazy kids!

They were having so much fun laughing at her predicament! Suppose she had really panicked. Would that have been even funnier?

“Oh, we were just fooling around, boys will be boys!”

Full plate armor back in the day was only ~50lbs (the kind you fight in).

“To conclude my PowerPoint, we can increase battle efficiency by up to sixty percent if we ditch the iron deathtraps and take our chances with leather armor like the Romans. Remember how much we like the Romans, sire.”

“I’m afraid we can’t afford to alienate the blacksmith lobby in a revolution year. Have you looked into Master da Vinci’s tank idea further?”

So basically she is getting credit for running an 11-minute mile at approximately my weight.

I don’t know whether to feel heroic because I can do the same thing, or like a fat sack of shit because this is in fact a non-trivial physical feat she accomplished and she should legitimately feel proud of herself.

But are heavy bomb suits pants?

Full plate armor back in the day was only ~50lbs (the kind you fight in).

Take my advice. Make friends with some dwarves and score some mithril armor.

I’m not going to lie, they’re going to want something for it. And most likely you don’t have the GP to pay them in money, so… I’m just saying, it beats the hell out of getting stabbed through the heart by some kobold in your first dungeon.

Joking aside, they would slaughter those in just leather armor. Pole arms were a counter measure especially those to take a man off a horse. But knights were surprisingly agile. Parade armor and jousting armor was heavier and less practical. And those are often the specimens that survived.

Bows to a degree and crossbows were in an arms race to try to defeat armor. But it was firearms that eventually lead to full armor being abandoned. A row of semi-trained hand canon users leveled the playing field against those in full armor.

Funny you mentioned a tank, I “invented” one when I was like 12 for D&D, not even knowing about Da Vinci. Basically a covered, armored box with arrow slits and horses INSIDE pushing, rather than pulling. Archers could fire out any side through the slits, even fire arrow! I even had water and hay stations.

Basically a covered, armored box with arrow slits and horses INSIDE pushing, rather than pulling. Archers could fire out any side through the slits, even fire arrow! I even had water and hay stations.

I just invented “mithril wood” in my campaign. Imagine a wood whose cell wall is a mineral composite, similar to mithril. So when processed, it is more or less a strong, metal sponge, light like wood or aluminum, but stronger than most steel. I made it super rare, only growing in ancient elven forests which needs at least 1000 years to get a tree big enough for a breast plate. It is super hard to work with, as one must either carve out the shape with magic the humans came up with, or hardened mithril chisels the dwarves make. It is one of those things that require two parties to build, thus strengthened trading bonds for the super rare material.

But are heavy bomb suits pants?

I don’t think you’d be allowed onto a plane in one.

The lorica hamata is a type of mail armour used by soldiers of the Roman Republic and the Roman Empire. It was issued to both primary legionary and secondary auxilia troops and was mostly manufactured out of bronze or iron. It comprised alternating rows of closed washer-like rings punched from iron sheets and rows of riveted rings made from drawn wire that ran horizontally, producing very flexible, reliable and strong armour. Each ring had an inside diameter of about 5 mm, and an outside diameter... The lorica segmentata (segmented cuirass) is a type of personal armour used by soldiers of the Roman Empire, consisting of metal strips ("girth hoops" fashioned into circular bands), fastened to internal leather straps. The Latin name was first used in the 16th century; the ancient form is unknown. The plates of lorica segmentata armour were soft iron inside and (some at least) were mild steel on the outside, making the plates hardened against damage without becoming brittle. This was a deliberat...

and of course, the 50 lb suit of armor is designed to defend against novel weapons and tactics. 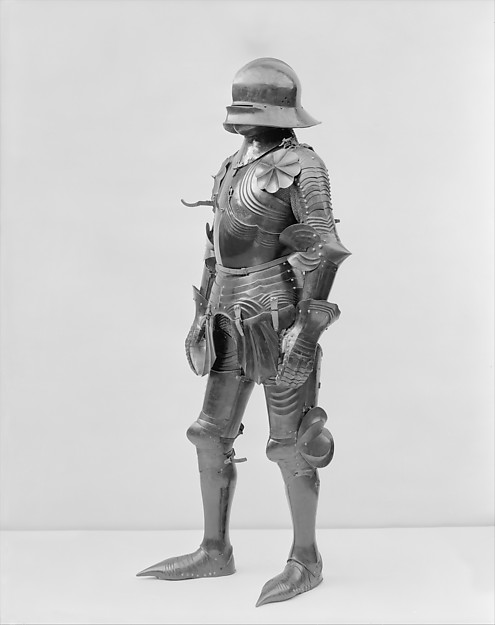 From the early nineteenth century through about the mid-twentieth century, it was not unusual to restore incomplete armor by combining elements from different armors, making missing pieces out of modern or reused old metal and decorating or...

So basically she is getting credit for running an 11-minute mile at approximately my weight.

I don’t know whether to feel heroic because I can do the same thing,

You can run an 11 minute mile wearing an extra 75 pounds?

I think they’re saying that her weight + 75 pounds = their weight.

Of course, their weight probably consists of much more muscle and much less restrictive, insulating material.