The truth about Ada Lovelace

The woman most often known as ‘Ada Lovelace’ was born Ada Gordon in 1815, sole child of the brief and tempestuous marriage of the erratic poet George Gordon, Lord Byron, and his mathematics-loving wife Annabella Milbanke.

I read a book a while back called (appropriately enough) The Difference Engine by Sterling and Gibson. Babbage and Lovelace perfect the mechanical difference engine and kick off the information age a couple centuries early. I can see the ebook at my library and I’m pretty sure I have the paperback from eons past (the 80s or 90s, 1980s or 1990s, ahem). I’ll have to revisit that one.

I remember that one! I think I still have it on my bookshelf.

Sterling was tweeting a lot about Lovelace last week (and Georgiana Babbage, and Mary Somerville).

that was the first book to be called “steam punk”, though one could argue that anything set in the 1800s could qualify. It’s amazing ro me how much fun people seem ro have dressing up for these things, when there’s so little base material ro draw on!

I read the article earlier this morning, it was quite a great piece and definitely teases the mind as to what could have come to pass had Ada Lovelace never gotten cervical cancer. Also Babbage’s Difference Engine was maddeningly close to completion.

I think Babbage was too proud and ego-driven, but i believe he could’ve made more progress had he opened up his designs up to more scholars of his time. Research into the design would’ve been refined and progressed faster, but alas open-sourcing your life’s work is heresy… more so in his time.

I have a strong affinity toward all these early computing attempts. In high school we were tasked to write in-depth essays on early computers, computer languages, binary, hexadecimal, etc. I don’t quite remember all the details these days but reading about Ada and Babbage, and having other pioneers mentioned in the article was a treat. Would love to read more about other figures (:

that was the first book to be called “steam punk”, though one could argue that anything set in the 1800s could qualify.

Well, actually… K. W. Jeter’s “Infernal Devices” from 1987 was the first one called that though Jeter included Powers and Blaylock in it. 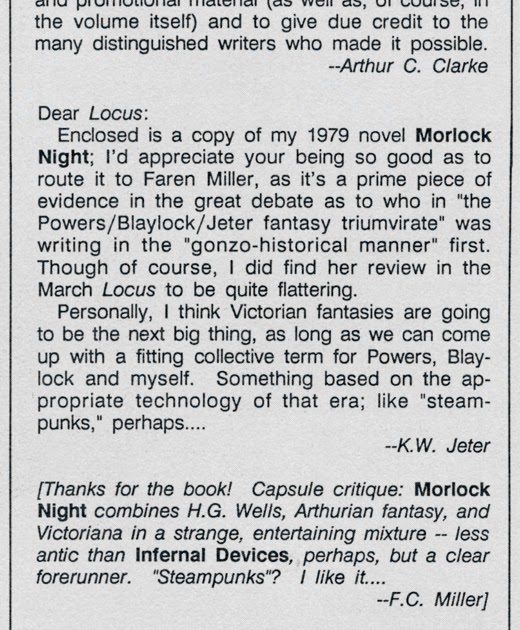 The Birth of Steampunk

One could argue that-- but Steampunk, at it’s core, assumes that computer science had a cultural impact during the age of steam, instead of developing out of electricity and radio. Essentially, it assumes that a analytical engine had been developed into a practical technology.

Essentially, it assumes that a analytical engine had been developed into a practical technology.

In a way we’re partially heading back into mechanics/electromechanics. MEMS switches, for example, can be much more EMP- and rad-hard than conventional solid-state semiconductors.