The viability of 'Calexit'

I guess someone else had the same idea!

While the series is meant to evoke the current political climate, writer Matteo Pizzolo says it is not a "Trump hit job."

I don’t think modern sensibilities of the west really align with civil war. Look at Clive Bundy’s mini-revolution. The people are who gearing up for the fight are incapable of dealing with any adversity or threat.

Ultimately I think California will leave the US quietly, starting the dissolution of the entire union into four or five nations, one of them being an explicit nation of white Christians.

Leaving quietly won’t be an option unless other states are leaving noisily. California is not only big liberal cities but also contains a small but well-armed conservative rural contingent and also establishment conservative bastions like Orange County and the Central Valley. Also, the federal government isn’t going to let the world’s 6th (soon to be 5th) largest economy just cleave off, leaving the backwards states even less well funded and more prone to turmoil.

Absent a serious and permanent change at the federal level, though, I doubt that California will leave at all in the next 20 years. More likely to happen is California continues doing what it’s doing now: defying unfriendly federal governments on issues like environmental protections and sanctuary cities. As long as the defiance doesn’t go explicitly against the Bill of Rights (as Southern states’ racist defiance during the 1960s tended to go) they’ll be left alone except for some impotent bluster.

[since this is off-topic but also an interesting discussion, perhaps @orenwolf can impose some separatism on the posts starting with Mangochin’s]

they’ll be left alone except for some impotent bluster.

The Fugitive Slave Act or Fugitive Slave Law was passed by the United States Congress on September 18, 1850, as part of the Compromise of 1850 between Southern interests in slavery and Northern Free-Soilers. The Act was one of the most controversial elements of the 1850 compromise and heightened Northern fears of a slave power conspiracy. It required that all escaped slaves, upon capture, be returned to the slaver and that officials and citizens of free states had to cooperate. Abolitionists n...

Also, the federal government isn’t going to let the world’s 6th (soon to be 5th) largest economy just cleave off, leaving the backwards states even less well funded and more prone to turmoil.

If you have a white-nationalist christian-theocracy bloc, then it’s a lot easier for them to wave goodbye to California and set up shop in whatever’s left than it is for them to fight California. If the US really has “president Bannon” then I think California would be allowed to leave peacefully.

Also the Republican party isn’t very homogenous. California conservatives aren’t Alabama conservatives. Republicans in California have distanced themselves from Trump, and things could get a lot worse if Trump ratchets up the anti-Mexican racist.

My scenario for a caliexit is that some leader makes a Cameron-Brexit-like deal to appease some elements of the population (hold a referendum they are sure will fail) and then during the lead up to the referendum things go really nuts. If the vote for California independence was held on a say when Los Angeles city hall was under siege by ICE officers looking to get some immigrants that the city was choosing to shield, who knows what that would look like in the polls.

Leaving quietly won’t be an option

Well, because California has nukes.

At what point do you say to yourself, “The federal government sure seems obsolete” then?

I can see them being that short-sighted, yes. But it wouldn’t be quiet.

Agreed. As @subextraordinaire notes, California’s establishment Republicans tend to be more, shall we say, reasonable than their counterparts in the backwards states. One thing they all share in common is a desire not be relegated to permanent political impotence in their own state, with the only alternatives being to move to said backwards states.

Which sounds fine until you acknowledge that most states are purple states, and that (especially in the GOP majority states, where a lot of time is spent on making the poor and powerless more so) it’s not so easy for people in the minority there (who are often minorities in other senses) to just move away. That aside, as long as the sovereignty of the “minimal federal government” involves the standards that every state must adhere to the Constitution’s amendments, a separation from the Union does not truly exist.

Which is why the Fugitive Slave Act of 1850 brought up by @Wanderfound doesn’t apply to the discussion of the kind of soft separtaism being discussed here for California in the context of the next 20 years.

It also seems that certain old school civil war era policies are being directed at California and other Dem majority states which could push a state like Ca. to think twice about an exit.

“Trump and his economic advisers have proposed ending the individual federal tax deduction for state and local taxes paid—a write-off with Civil-War era roots that has survived past attempts to kill it. Advocates for Trump’s plan have sold it in part as a way to shift more taxes onto high-income, high-tax states like California, New York and New Jersey, all of which lean Democratic.” 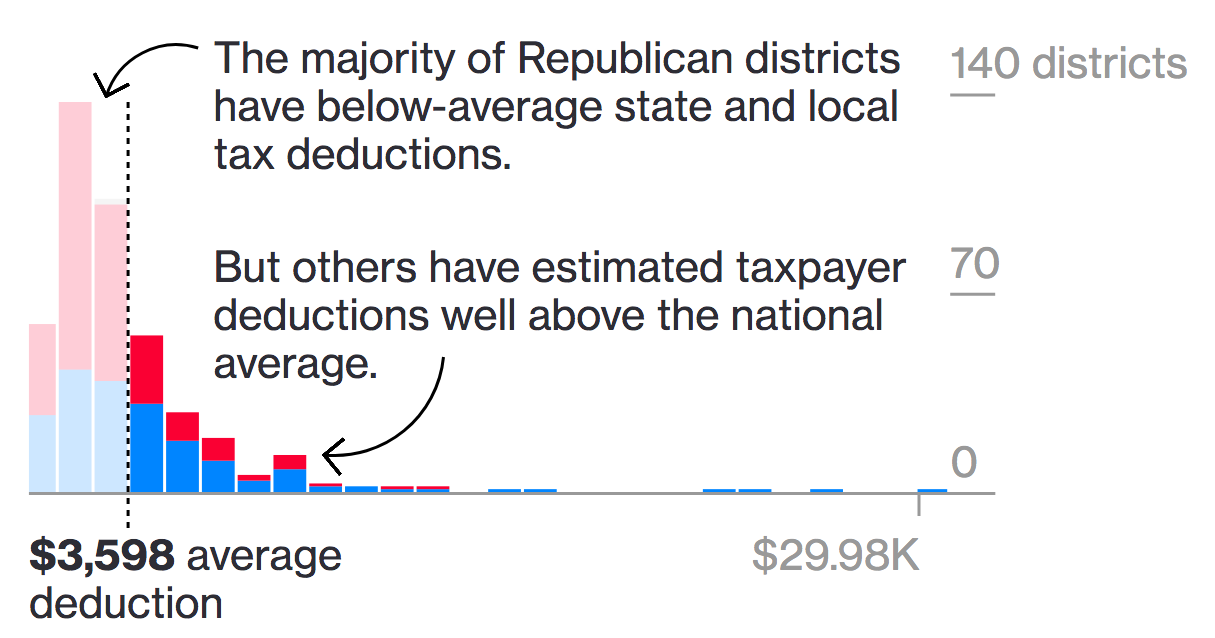 Breaking down the consequences of the GOP's proposed tax-overhaul legislation.

Could backfire as the article suggests but, Ca and other Dem states are now fair game to Trump and his cadre of backwards thinking old white men…

It is this concept vs. tax dollars that are the two sides of the balance. From the red perspective, the plus side of CA staying is all that money flowing to the federal coffers. The plus side of CA leaving is what you said. When there is a tipping point, such as CA becomes a burden (unlikely) or CA starts refusing to pay, that’s when the cleave will be more likely. It will not come down to a moral argument. It will be a tangled, bureaucratic, taxation, budget, fog-of-media, falsehood-vs-falsehood type situation.

I agree that this would be bad, but considering the speed at which Trump is enacting his agenda (glacial) I think that if the 2018 elections are clearly a repudiation of Trump, that would pretty much prevent such a policy.