Each racket charges via USB, powering up for a full 24 hours with the ability to unleash up to 10,000 zaps.

What is that supposed to mean? It takes 24 hours to charge? It loses its charge after 24 hours?

Or you could buy an el cheapo for $9.99 like we did. It’s awesome, murdering flies has never been so fun.

The Bug-A-Salt 2.0 fires common table salt at house flies. It is much more fun, and effective, than a flyswatter. 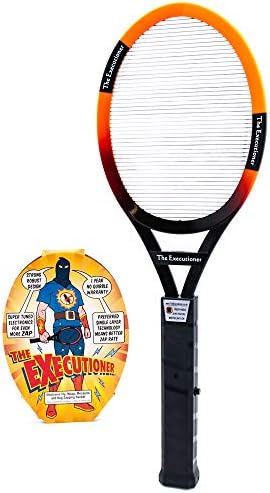 Well, it is certainly a racket.

Didn’t work that well for me and hornets in our backyard. They’d just bounce off and fly away.

Tried it with my tongue, and that worked.

I’ve always assumed that these end up, like the traditional standing bug zapper, exploding bits of bug everywhere, which is generally worse than having the bug flying around.

Destroy those blood-sucking fiends with laser beams and AI.

I’ve always assumed that these end up, like the traditional standing bug zapper, exploding bits of bug everywhere, which is generally worse than having the bug flying around.

After seeing someone else in a campground using these, we bought a pair of Zap-Its to keep in the RV. They’re terrific! And this design has a nice grid that helps keeps us from accidentally zapping other occupants of the trailer. They’re especially useful at night after closing the door for the last time. We sweep them around the nooks and crannies where bugs typically go to hide; they get spooked and fly straight into the electrodes.

One charge cycle powers them for several weekends worth of outings (the way we use them, YMMV).

To answer your question, I’ve noticed the bugs don’t “explode” in Hollywood fashion. The zapper typically blows a wing off the insect (which doesn’t always kill really large bugs) but that’s it. The results are a lot cleaner than a traditional swatter, which can leave splatters on the walls. All we do is sweep up the carcasses the next day.

While obviously not intended for backpackers, etc., I’d recommend these to anyone who goes car or trailer camping.

The bigger critters require a steady follow through. More like a push than a whack. It increases the contact time. Extra points for sending them to the ground then holding the racquet on them until they pop and smoke.

I’m not a violent guy, but with wasps and hornets ya gotta be all in.

anyone who goes car or trailer camping.

Or boating. We too had a routine of sealing up the cabin just before bed. Dad in his underwear hunting down mosquitos. Literally skin in the game. An unlikely super flabby super hero humming “psycho killer”. The kids would narrate the action while flushing critters.

Tried it with my tongue, and that worked.

Also came here to mention Harbour Freight sells non-rechargeable version for ~US$4. I’ve had one for close to 15 years, have yet to exhaust the 2 D-cells I installed back then. Works well on mosquitoes and small house flies. I’m not brave (stupid?) enough to try it on wasps or hornets.

We had one of these last summer,
they’re cumbersome and do not work.
Save your $ and buy an old fashioned fly swatter.

I use a (home made) butterfly net - a metal wire circle with a conical net. No: electronics, batteries, plastic… Weighs “nothing”. Takes up very little space. - I am into travelling very light. Buy in the toy shop. The electronic ones should be bannad/taxed as there is a perfecty good alternative!! One million plastic ones weighs some 200 tons!