I prefer a can of ‘Raid’ bug spray. It’s basically nerve gas for insects.

We once got one of those mosquito trap thingys for our backyard. Much as promised it trapped and killed thousands of mosquitos.

Unfortunately our yard was filled with tens of thousands of mosquitos and it made no difference.

I’ve lived in the country, where flies are unavoidable. Those sticky strips are far from worthless. They can gather hundreds of hideous little corpses within hours. Revolting - but not weak!

I use Japanese bug zapper that is just like this one-
https://www.amazon.com/Electronic-Indoor-Insect-Killer-Zapper/dp/B00I0G0JXE/ref=as_li_ss_tl?ie=UTF8&qid=1458653593&sr=8-3&keywords=mosquito+zapper&linkCode=sl1&tag=insectcop-20&linkId=c1c226c9fd929ca2b38c19df1f7bc23d
It is very effective. I have it in a balcony room, where the UV glow can be seen from most of the house. It runs all the time, and there are frequent satisfying pops. Most of the bugs end up on a tray that can be emptied without moving or powering down the light.

Picture taken from the Amazon listing.

He seems to be suspiciously gazing upward at the glowing thing looming above his head as if it were some sort of beacon of uncertainty.

Almost as if to say, “Here I am. A fit looking guy hanging out in my hip and modern loft with its exposed ducting. I just want to sit here and read the latest issue of Men’s Health, but this damn glowing orb keeps taunting me. Is this what my life has come to?” 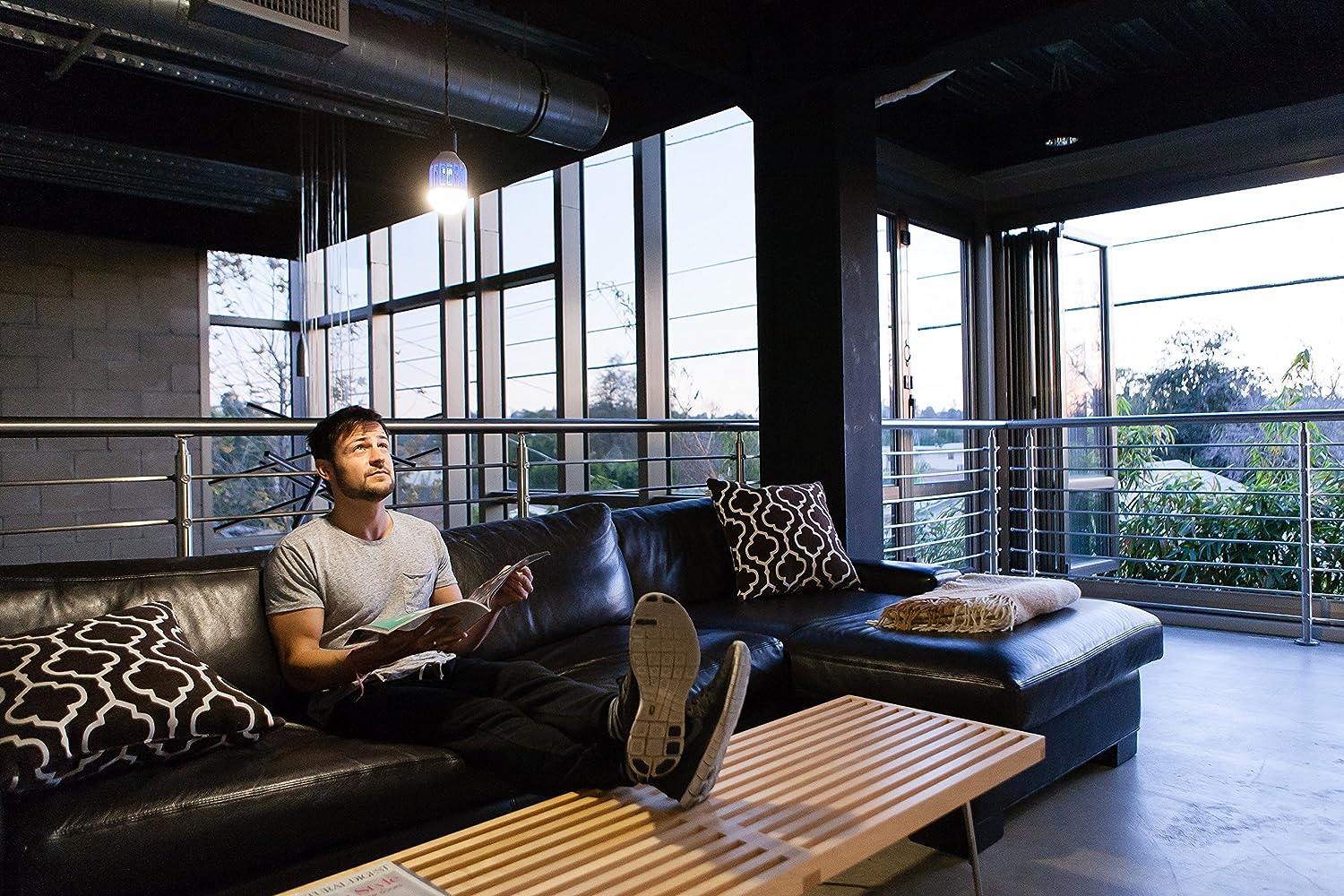 these things are made to kill mosquitos and moths, the common house fly does not react to uv light of this wavelength at all. they go more after smells, you should use sticky pheromone strips for these. also, these bug zappers tend to pop insects, aerosolizing their body fluids, spreading them over quite some distances as a fine, invisible mist, spreading bacteria. i would not want to have that hanging above my head. i have my bug zapper near my window, far away from everything to intercept those mosquitos before they even come close to me. but as i said, these things are not suitable for house flies.

I've heard that bug zappers can actually help transmit diseases -- how does that happen? Once the mosquito dies, how can a disease it was carrying be transmitted?

Little bug corpses keep raining down upon his reading material.

We have moths at the telescopes on Mt. Graham in eastern Arizona. Lots of them.

The solution was to make the Mothinator 2000 XL. This is a 50 gallon garbage bin with the UV light frame from a big bug zapper mounted on the lid, but without the zapper energized. Instead, there’s a big 8" fan under the UV light that sucks the moths into the garbage bin.

The garbage bin fills to half-full after a month of service in the warmer months.

I have one as well, was curious. Thus far, they have killed a modest amount of small bugs. However mid summer, there are massive hatches of some sort of fly which get in when I open my back door, promptly find a corner an die.

We will see when the massive hordes of flies come. If they fry enough to feed my fish, I’ll be pleased.

While we’re at it, those high frequency pest deterrents are also crap, unless the pests you are trying to deter are teenagers.

It’s like it’s taunting him. Go on…touch me…you want to don’t you? Go on lick your finger and touch me.

The only advantage they have is not being quite so gross when you throw them in the trash.

related: the light bulbs are a lot easier to get out of your hair.

PSA: do not hang sticky traps outdoors, we caught a hummingbird. That was not pretty, an even less pretty was the cat also getting the sticky tape stuck on himself while trying to get humming bird.

Create an Orange Juice Fly Trap as described in the first example in the page below, and try to use the biggest soda bottle that you can find. The effectiveness of this trap is not to be underestimated - I made one to clear the flies from a chicken coop in summer and was catching 100 or so flies every morning per trap. Fair warning, the final results are disgusting. How to make a fly trap with what you have at home. Get rid of pests naturally!

I moved into the house in the middle of October so it wasn’t really a problem. I noticed there were quite a few of the packages for the bug collecting traps in the garage though. It wasn’t until the following summer that I noticed the problem. I suspect it was due to a drainage ditch in the county park my yard butted up against, but the number of rather large and biting horse flies made being outside intolerable. So I broke out one of these thick plastic baggies, put a little water in it according to the instructions, and hung it up.

I was totally unprepared for the level of carnage that followed.

After only a couple of days, I had collected thousands of dead or dying flies in the baggie. They were able to climb in to get at the attractant that smelled of decaying flesh and ultimately added their own. I was replacing full up baggies with new ones every other day for a few weeks, and I figured I’d killed every fly in a 5 mile radius. Thousands and thousands of dead bugs.

I hung a bug zapper outdoors. The mosquitoes weren’t interested, and I stopped using it after it killed a luna moth.