Things Cut in Half

That’s one ugly little grenade; the cutaway makes it perfectly clear exactly what its job is - shred human flesh.

I agree that chemical weapons should be off limits, but what makes this infernal little device any more palatable? Profit?

I agree that chemical weapons should be off limits, but what makes this infernal little device any more palatable?

I guess because you can only kill so many children with it at once, and dying via explosive is often (though not always) quicker than dying via chemical agent. Still a nasty little piece of work though.

A lot of military equipment has a sturdy but elegant functionality. Look at the way the threads of the fuse engage both the stamped metal shell of the grenade and the spoon/pin assembly. The shrapnel looks like cubes, but I believe it is a continuous coil of a sort of square spring, with the notches stamped in to ensure even fragmentation. I think there are two types of grenades - one is just time delay and the other also has an impact fuse. This one looks complicated - any suggestions what type it is?

can’t place anything does someone have an annotation of one of these buggers?

M26A2 with an impact fuse? In the BB photo, the vaguely baseball cap shaped thing at 10:00 o’clock is the striker, and just above that is the cross section of the cotter pin that is the safety on the grenade. At 11:00 is the cross-section of a heavy metal pin that anchors the coil spring for the striker. This coil spring is the bright ring of metal around the heavy pin. The connection of the striker to the coil spring appears to have been cut. Anyway, with the hand around the grenade, the user pulsl the ring attached to the cotter pin. The “spoon” handle keeps the striker in place as long the user holds the spoon, and once that’s released the rat-trap style spring tosses off the spoon and the striker rotates clockwise (in the photo) to strike the primer at the top of the fuse. The light blue material would be the fuse, The firing pin and spring in the center confused me, but that seems to be a separate impact fuse and detonator. The khaki stuff at the bottom of the fuse would be the booster for the main charge, like a blasting cap. The actual explosives aren’t shown.
http://www.lexpev.nl/grenades/americas/unitedstates/m26a2m57.html 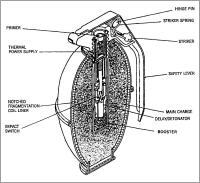 So a frag grenade is basically an inside out disco ball.

Huh. I would have thought that there would have been some sort of embossed marking on the outside so that you could tell which one it was by touch.

This is all kinds of awesome. Thank you, Xeni, as always.