Originally published at: This Chrome extension makes it easy to see who paid for a Twitter blue check | Boing Boing

Why do I find this particular dumpster fire so entertaining?

This has been wild to watch. It’s like he’s systematically making every possible bad decision. He’s apparently taken the “throw everything at the wall, and see what sticks” approach, no time to actually do any sort of research or testing, just “GO GO GO,” panickedly trying to stop the bleeding, which is only making it worse. Quite a show, can’t wait for the finale.

IDK why not just quit?

Why feed the beast?

Wait… so Elon is offering Twitter users who have the old corrupt blue check to pay a fee which will absolve them of that corruption and give them a fresh new corruption-free blue check? Where have I heard of this sort of thing before?

To be fair, I’m aware of some artists who feel obligated to buy a blue check so their “commissions open” posts aren’t buried by the algorithm. They’re doing it to keep food on the table, so I can’t condemn them for playing the game; that hate’s reserved for Muskrat, who’s messing with their livelihoods.

Dunno. I did, but I guess I enjoy watching it burn. That’s my type of “verification” (Or validation, but whatever)

Hey! Elon might be leaving money on the table!

Bring back the moderation people, but instead of suspending abusers permanently, or until the offending tweet is deleted, let them back on (as is, no deletions) by paying a penance fee, or pre-buy a set of indulgences.

I’d guess that for some people Twitter is important to their livelihood/brand. For others it’s just the most convincing/confusing way to impersonate others.

I’ve installed this extension and love it. It makes it much easier to weed out the scam accounts when surfing twitter. Elon’s paid-Verification broke the functionality of Twitter’s authentication process, but this brings it back. I’d actually prefer if this plugin did it in a less judgy way. I really don’t care if someone pays for twitter, I just want a way to easily identify the fake accounts from the real ones. 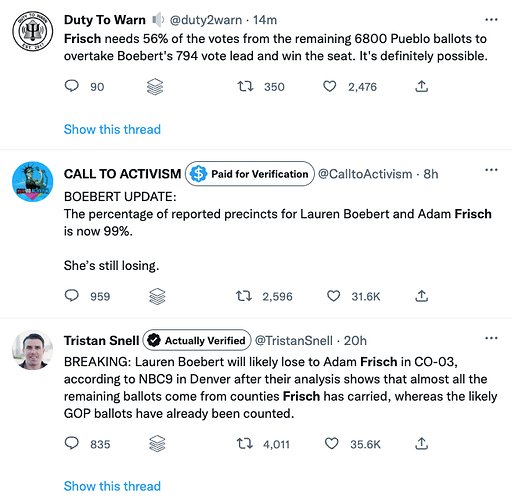 This is actually useful, as it’s impossible to tell the difference from the web view. My understanding was that they were going to be distinct, but nope, the dumbest possible implementation was the way he went. Of course.

Quite a show, can’t wait for the finale.