IMHO, Dyson products are very overpriced for the quality of their build. We had a Dyson “animal”, and as it turns out, a vacuum purportedly designed to handle animal hair had a fatal flaw of animal hair getting caught in part of the intake, wrapping itself around a bearing (causing friction/heat), and eventually failure of the very thin cheaply built plastic bearing support. And… you can’t get the part from the company, so you can’t fix your expensive vacuum.

Not going to make any brand counter suggestions, but would strongly recommend doing your research, and comparing similar vacuums if you’re even remotely considering a Dyson.

It’s my experience that all bag-less designs of this sort are worthless.

After looking at reviews, I purchased a mid-line Hoover that’s also bagless. So far works a bit better than the Dyson ever did, at about 1/2 the price. Haven’t had to get to the repair stage yet, but from what I’ve seen online, there wasn’t a giant trail of know design flaws that the company isn’t supporting their customers on (as there was with the Dyson).

I can second the Hoover.

I got one of these:

Far cheaper than a Dyson, and with a powerhead for the carpet, and you’re not having to hold up the heavy end. Does okay with cat hair, but could be better.

Dyson hand vacuums are too bulky and have crappy battery life.

You should have mentioned the HEPA filter and the cyclonic technology!

I’ve got a little Hoover (upright)(bagged) that must be 30 years old (or more), works perfect.

This is very similar to what we got, but we got a corded model. Takes a bit of getting used to with the weird “swivel head” type of steering, but ours does just fine with pet hair.

Oh, that Dyson gear… all of it either sucks or blows. 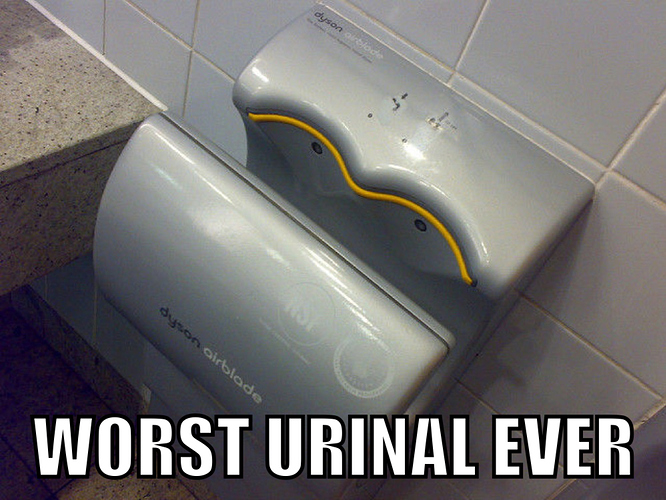 We’ve had a Dyson DC7 (I think roughly the same machine as your “animal”) for 15 years. Two parts have broken, we easily sourced replacements online (not from Dyson) and the repairs were easy.

YMMV but I have the older model of this vacuum and it’s excellent. I also had an upright and it was great. I currently have a high end Meile canister vacuum. It cleans really well but I’ve since decided I absolutely despise canister vacuums.

Repairs would have been easy if I could have sourced the part. They changed the design (probably because the old model I had had sucktastic design), and I could not find anyone with the part. Called dyson to see if I could either get the part, or some deal on the newer replacement roller assembly (the places I’d seen online had it for $100+). No deal. They did find 4 of the bearing supports I needed in some warehouse. Confirmed that that was the part with a part number off of a schematic of the old model, and had to pay $8 plus about $14 for shipping. They shipped the wrong part, then refused to refund me or exchange the part when I sent them a pic that the part that I had been sent was clearly not the part ordered. That’s when I decided that Dyson was all about hyping their not really superior tech, and not at all about supporting their customers.

I’ve never had to deal with Dyson customer service, but as it is an English company, and I once lived in England, I can speculate as to what it was like. The internet has made it much easier to source parts from not-Dyson than it used to be

I think that Dyson vacuums are generally _over_engineered, except for the obsessive use of plastic (which is good quality but gets brittle with age), but their machines are also overpriced and fiddly. I think they are a bargain if you can get them for around 50% retail, which is often possible.

I’d agree. If we had paid 50% retail, I’d think of the brand as overhyped but worth what I had paid for the longevity we got out of it. The frustrating customer service on the other hand…

The best vacuum I ever had was an ancient electrolux cannister vacuum (think 1950’s sleek chrome, and you’ve got an idea) that I salvaged from next to a dumpster in college. That thing was a beast, could reverse (if you needed a leaf blower), and never acted up in the 10+ years I had it. When we moved in to our first house, the wife convinced me to give it away in favor of a newer plastic non-beast that has long since been scrapped.

They design their machines in England, but they don’t make them here.
Dyson moved its factories from England to the Far East some years ago
James Dyson is an ardent Brexiter.

I have had the pleasure of dealing with the UK based customer support for a poorly performing Dyson and I can confirm they’re shite. Not particularly rude, but the reps seem to have been instructed to never accept a case unless the customer agrees to pay for it first.

Basically, as commented above, Dysons are a nifty engineering principle built almost entirely in brittle plastic. The heat from use warps the connecting bits, and constant opening and closing weakens latches and seals. Oh, and if you are slightly rough when putting the thing back on the cupboard you’re guaranteed to get cracks.

I’m just going to post this and walk away…