Originally published at: This fun and thoughtful show asks where latinos sat on the bus with Rosa Parks | Boing Boing

story of Latino-Americans struggling to find a place in an American history that is often binary to the point of erasure.

I grew up in New Mexico which makes for an interesting example and counterexample at the same time.

The state has 3 intertwined cultures: Native American (strongly pueblo with some towns over a thousand years old), Hispanic, and white non-hispanic.

Note that I said Hispanic instead of Latino. That’s a because growing up, Latino was considered the wrong term. Folks literally traced their roots to Spain or Portugal and are frequently considered white. Latino was reserved for people in parts of California and Texas and were looked down on. Despite being (in some cases literally) cousins, New Mexican Hispanics would look down on their Mexican relatives.

Sounds familiar to the Black experience in some ways, different in others. And how does it fit into a binary American History? Not well since Blacks were such a tiny minority as to have negligible history there. Lines weren’t drawn Black vs White. They were drawn oldest vs older vs old vs new.

New Mexico history and culture is far more odd and old than I can mangle into a few paragraphs. But a nice example of how American history has many chapters.

What if you were Asian?

“One day I got on a bus and saw that all the black people were in the back, the white people in front. I didn’t know where I belonged, so for a long time I stood near the driver,” Tien would recall. “Finally, he told me to sit down in the front, and I did. I didn’t take another bus ride for a whole year. I would walk an hour to avoid that.”

Asians were subject to some pretty severe discrimination prior to WWII. They were the subject of the first race based immigration restriction. They were despised as refugees in the early to mid 70’s. Silicon Valley was built on the Japanese American farms that were confiscated as part of the internment.

Depended if they could “pass for white” or not. The signs typically said “Colored”.

In Doctor Who’s “Rosa”, Yaz (ethnically Pakistani) is allowed to sit at the front of the bus, but is later thrown out of a diner for being “Mexican”. 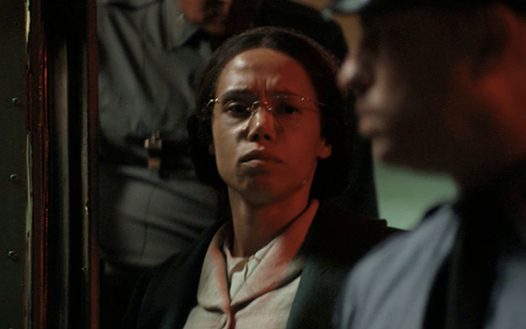 Rosa was the third episode of series 11 of Doctor Who. Set just prior to Rosa Parks' arrest for refusing to surrender her seat to a white passenger, this story dealt with heavy themes, and included blatant depictions of racism, mainly directed at the...

I don’t know how accurate that would be.

Another example of the collision of “general” racism and targeted anti-Africanism (is there a better term, like anti-semitism?). I expect these tricks wouldn’t have worked if there had been baseball teams in Western states where racism towards Hispanics and Native Americans was a day-to-day practice. While professional baseball was formally regarded as a strictly white-men-only affair, the racial color bar was directed against black players exclusively. Other races were allowed to play in professional white baseball. One example was Charles Albert Bender, a star pitcher for the Philadelphia Athletics in 1910. Bender was the son of a Chippewa mother and a German father and had the inevitable nickname "Chief" from the white players. As a result of this exclusive treatment of black players, dec...

I reviewed a book and an audioplay back in February that both dealt with Asian erasure from US history binary. It is also absolutely an issue!