This is the trailer you're looking for. (Star Wars: The Force Awakens)

Just bought my tickets for December 18 at a theater in San Francisco where you get to reserve seats like civilized humans.

I like that the trailer is hinting that the battle at Endor was a huge tactical victory but, in the end, strategically meaningless and now a new generation is looking to put the pieces of a rebellion back together.

A good buddy of mine got me a seat at the 2:00 AM show at the Chinese Theater (the second screening). Seven-year-old Donnie wouldn’t let 45-year-old Donald pass up the opportunity.

Yeah, I got work in the morning. So what? I suspect that this December is gonna be what 1999 should have been.

Fuck you BoingBoing. I’ve been avoiding any SW7 promo material, just to try and keep my first viewing pure, and now I’m literally reduced to tears by that trailer.

Goddammit. I don’t want to get my hopes up for this, but it looks like it’s too late for that now.

I’m… Just so frustrated. I want to love this, but I’m too afraid of being hurt again. I just really want this to be good, but I can’t trust my heart.

Then again, there’s this abomination:

In 1999, I was a young associate lawyer at a big firm in San Francisco. I bought a big block of tickets to Episode I opening night and gave them to a bunch of folks on staff. They all showed up – they were very grateful for the gesture – but fuck if I wasn’t the shifted personification of blame for that shit-storm.

I took a first date. The after date went better than the movie.

That made me cry as well, when I first saw it. Which re-doubled my resolve to avoid viewing any more promo material.

I wanna be a big blubbering baby, covered in goosebumps and snot when I watch it in the theater.

I want to love this, but I’m too afraid of being hurt again. I just really want this to be good, but I can’t trust my heart.

I hear and feel your pain. But let it all go. Keep the expectations low. Avoid promo materials if you can, but don’t worry overmuch about it at all. A couple years ago, we still thought there would never be another of these, and we were okay with that. And now that it looms before us, let go your anger, let go your fear, let go your hate. Walk into that theater with a single emotion in your mind:

Yeah, I know, it’s a dorky joke, but still it’s the only way forward. Maybe Abrams and Disney screwed it all up, maybe they didn’t. You won’t find out until you see it for yourself. So don’t torture yourself thinking about it. Have a great Halloween, see some friends and family for Thanksgiving, maybe do some holiday shopping, and then remember: oh, hey, there’s this movie coming out I wanna see, has cool-looking spaceships in it, oughta be fun. Be an innocent, unjaded seven-year-old in 1977. Buy your ticket, grab a large popcorn and a Mr Pibb, plop down in the sixth-row-center seat, and…

Aw, man… Dates are so annoying. They’re like sand! You track them into your house, they get into your clothes. It’s so coarse and irritating.

It’s so coarse and irritating. 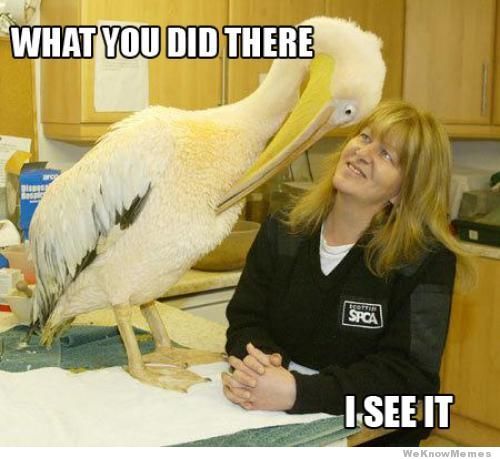 I’ve just been trying not to pay attention to it. I thought that would be the best way to not get worked up, but clearly that was a faulty assumption. I think I love Star Wars too much to not care.

Exactly! When I am celebrating Life Day with my family this year, I won’t even be thinking about Star Wars.

Have a great Halloween, see some friends and family for Thanksgiving, maybe do some holiday shopping,

Wow. I’d actually have to sit down and think about that one before I decided.

last time I reserved a civilized human I got ripped off, watch out!