This is the world's largest living plant and it's at least 4,500 years old

Originally published at: This is the world's largest living plant and it's at least 4,500 years old | Boing Boing

Unseating Pando as the champ?

Though looking up the name again, evidently there is a huge colony of sea grass of Ibiza that is 5miles across, which it beat too? Though this patch is estimated to be 100,000 years old.

Pando (Latin for "I spread"), also known as the trembling giant, is a clonal colony of an individual male quaking aspen (Populus tremuloides) determined to be a single living organism by identical genetic markers and assumed to have one massive underground root system. The plant is located in the Fremont River Ranger District of the Fishlake National Forest at the western edge of the Colorado Plateau in south-central Utah, United States, around 1 mile (1.6 km) southwest of Fish Lake. Pan Pando's ...

Posidonia, the natural treasure of the Pitïusas Islands

The oceanic Posidonia is an endemic plant of the Mediterranean. It cannot be found anywhere else.

and in florida-da, we destroy seagrass beds for fun and profit, leaving thousands of endangered manatee to suffer, starve and die. (see: starving manatee of st. john’s river inlet, biscayne bay and other.)
fuck this timeline and fuck capitalist fucking fucks and their fiendish fuckery!

Unseating Pando as the champ?

Apparently, there is another contender. 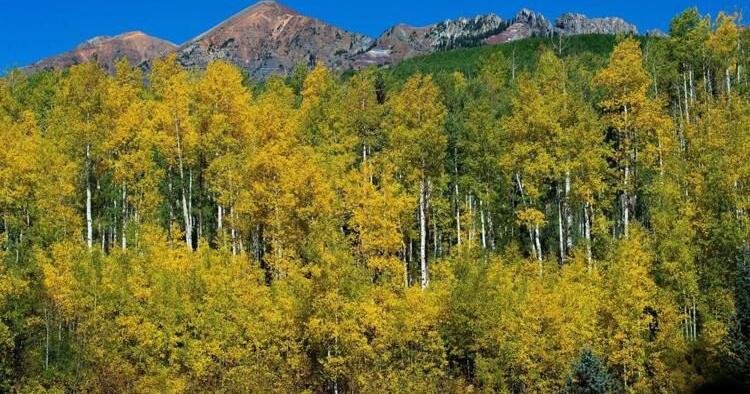 Gov. Jared Polis on Wednesday pooh-poohed claims that Australia now has the world's largest plant after the discovery of a self-cloning seagrass off the coast of the continent that has

Do we count fungi? Not really plants as such, but… Anyway, there are some huge ones out there.
(“Hey! My mycelium is down here!”)

Yes, at least it is mentioned in the wikipedia article.

The largest living fungus may be a honey fungus of the species Armillaria ostoyae. A mushroom of this type in the Malheur National Forest in the Blue Mountains of eastern Oregon, U.S. was found to be the largest fungal colony in the world, spanning 8.9 km2 (2,200 acres) of area. This organism is estimated to be 2,400 years old. The fungus was written about in the April 2003 issue of the Canadian Journal of Forest Research. While an accurate estimate has not been made, the tota A spatial genetic a...

It’s impressive that some disease or critter hasn’t found a weakness loophole of that monocrop in all that time.