This puzzle game makes me want to learn about opera

You’ve got a decent grip on the Magic Flute story. Soon enough you’ll meet Papageno, who will join his paramour in the famous “Let’s Dress Up like Birds and Screw” aria.

Might we also have a review by someone who has a clue about the actual opera? A naive take on a derivative work is fun, but isn’t very informative about the outcome of the work itself.

Call me stodgy, but the librettos are always the worst part. Also, (lightin’ the fire here) German operas can suck it, italian is where its at. I like my opera Green!!

Yes Wagner, I am looking at you.

No, Wagner is amazing - and, naturally, Verdi is rubbish.

Of course, that’s entirely absurd - some opera is great, some of it is rubbish and no-one has a monopoly on both. (Personally, I think The Mastersingers is the prototype for most modern musicals although it is rarely staged that way because people tend to think “Wagner = High Opera”. And yes, I like it.)

I do agree about the weakness of most librettos though. I recently went to a version of The Marriage of Figaro done in the back room of a pub with an orchestra that consisted of a piano, a viola and a flute and it was fabulous. And that was in part because the newly translated libretto was great and made the music really sing. (Also the staging was superb too.)

It has two of the finest arias in opera:

The Queen of the Night orders her daughter Pamina to murder the priest, Sarastro, forcing the dagger into her hand.

Sarastro prays for Pamina and Tamino’s love and their safe return.

I recently went to a version of The Marriage of Figaro done in the back room of a pub with an orchestra that consisted of a piano, a viola and a flute and it was fabulous

Now that sounds like the way to see Figaro.

Wagner’s orchestral music is phenom, and I want to punch the Cycle in the groin repeatedly. Give me trash Verdi any day.

Don’t get me wrong, I love the concept of Big Operas. But inevitablely everyone (cast, crew, audience, etc) takes it waaaay too seriously.

You’ve just reminded me of a sweet family friend who was about 65 years older than I was, and that was one of our little jokes: his favorite opera composer was “Joe Green”!

I would pay to listen to Natalie Dessay sing the phone book.

My name is Jeremy Milner and I am a professional opera singer and will be singing the roll of Sarastro this December and January with the Grand Theatre of Geneva in Mozart’s Magic Flute.

I spent some time with the Magic Flute app and I can honestly say that I’m impressed. It makes an otherwise very difficult and convoluted opera as accessible as possible to modern audiences.

The main difficulty in any adaptation of Magic Flute is dealing with the Masonic symbolism that the show heavily draws upon. Both Mozart and Emanuel Schickeneder, like most of educated Europe at the time, were Free Masons and drew upon the rites and symbolism of the Masons in order to tell a morality tale. At the time, it was a rather popular opera that most people could understand and connect with.

All in all, the game tells the most basic story of Magic Flute and does so really charmingly. The level music for each character is an abridged midi version of the most memorable music from that character’s arias. It’s easy to see how the game will reinforce the audiences connection with the characters on stage. From the delightfully happy Papageno bird call to Tamino’s Magic Flute call, the music ingrains the important thematic music into the audience/players in the hopes that it will provide a more easily accessible understanding of Magic Flute.

There are whole volumes that dissect the intricacies and implied meanings behind the ritual and symbolism behind much of Magic Flute and these concepts are really only gently touched upon within the game. But that’s not really the point of the game. The intention behind the game is to draw the audience into the world of Magic Flute and to generate excitement for the art of opera. I personally find the app incredibly successful in it’s presentation. I don’t want to call it an education tool, but it skirts the edge a little.

In short, I hope that more people find an interest in opera through this app. It’s a fun little game and is also a beautiful homage to a really wonderful opera.

Thanks to everyone and I hope to see you after a show some day!

Thanks to everyone and I hope to see you after a show some day!

Thank you so much for posting!

If you ever come to sing at Lyric in Chicago, be sure to say something in advance.

Magic Flute is one of my favorite operas specifically because of that aria - one of the more difficult pieces to perform due to its extraordinary range. "Der Hölle Rache kocht in meinem Herzen" ("Hell's vengeance boils in my heart"), commonly abbreviated "Der Hölle Rache", is an aria sung by the Queen of the Night, a coloratura soprano part, in the second act of Mozart's opera The Magic Flute (Die Zauberflöte). It depicts a fit of vengeful rage in which the Queen of the Night places a knife into the hand of her daughter Pamina and exhorts her to assassinate Sarastro, the Queen's rival, on pain of denying and cursing Pamina if she does not comply....

It’s not practical trying to do a literal interpretation of the story as the whole thing is rooted in fantasy. Masonic symbolism is prevalent throughout so in order to appreciate the plot it helps to have some basic understanding of the concepts and history of Freemasonry with regards to initiation rituals and obtaining higher levels of enlightenment by way of trial and tribulation.

It’s a bit more like Homer’s Odyssey than anything else.

High five and excellent post. I hope you have a highly regarded and fun run. It isn’t the longest opera by any stretch, but it does take stamina. I’ll buy you a lemon and ginger tea (or really a beverage of your choice, we have great wine) if you ever stop by my neck of the woods.

It’s one of my favorite arias too (the arpeggios were my ring tone until I ditched my iPhone), but in my head I can’t hear performed by anyone else but Florence Foster Jenkins in this famous…performance.

Ha! Yeah, I recall hearing this recording before and always thought it was a joke until I looked her up. Apparently she was a well known kook and delusional grande dame in her time…

In actuality, the ravages of syphilis had slowly, over time, made its
way to her brain and auditory and central nervous system. Then, even
worse, for the rest of her life she suffered severe side effects caused
by the era’s poisonous mercury and/or arsenic treatments.

Papageno is the best!

It’s worth watching the Met Opera version of The Magic Flute. The production was done by Julie Taymor of Lion King fame and Superman infamy. The puppets in it are amazing. I have seen it performed live from the highest seats (our favorite) and it was just so clever. Unfortunately the cameras on the DVD version are so close it sort of kills the puppetry for you. From far away, the puppets appear to float or move by themselves, then the puppeteers reveal themselves at the end of their piece. With the cameras on a track in front of a stage, you can see the puppeteers the entire time. Nevertheless, it is a great opera, and perfect one to share with kids. The DVD version is all in English as this is one of the holiday season productions they do geared toward children. 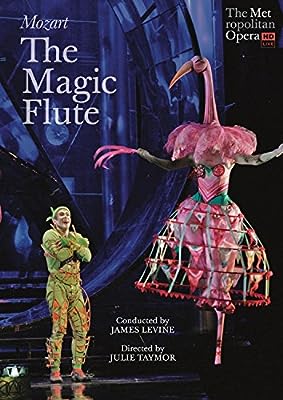 The inaugural broadcast of the Peabody and Emmy®-award winning series The Met Live in HD. The Magic Flute has delighted audiences of all ages for centuries. Julie Taymor's dazzling English-language pr ...

I have that DVD and agree that the production was fantastic but the English kind of spoiled it for me. Even though I don’t speak a lick of German there’s something about performances done in their original language that gives it a more authentic quality.

I also prefer the German. My daughter and I are opera buffs and The Magic Flute is one of our favorites, so we missed it being in German. However, I will say, it is really fun to go to those holiday shows where so many kids show up for the opera, and for a young kid I think the English is a help.

They performed it in German last year.

When you’re at the Met, they have the English (and other language) subtitles playing on the back of the seat in front of you. You can turn it off if it’s distracting and they are set up so you can only see the one directly in front of you. You really don’t have to read them that much anyway since they repeat every line 20 times in opera anyway.