Originally published at: This rarely heard guitar solo from Pink Floyd's Animals was only included on the album's 8-Track release | Boing Boing

Tangent: Quadraphonic 8-tracks were pretty amazing. I had a player for a short time and a few quad tapes. You could isolate a single channel and hear just portions of the song, like bass&guitar, or drums&keys, etc.

Am I reading this right? That’s NOT David Gilmour?

Yup. Although Snowy White’s probably best known for his time in Lizzy, he’s been in the Pink Floyd orbit for a long time and still (IIRC) plays with Roger Waters.

Which is something I only discovered here a couple of years ago!

Just heard about this: R.I.P. Jeff Beck
Never got to see him in concert, unfortunately; but I did get to see Pink Floyd on their Animals tour.

Of course I was tripping balls… and that frigging Floating Pig came out from behind the stage, with red glowing eyes; it stopped, looked around, then retreated.
It was an outdoor concert & I was fried in more than one respect.
Good times…

I cycle through every Floyd era regularly (tldr; they’re all great) and for some fortuitous reason I was listening to Animals right around Nov ‘16. I think I finally really fully understood it that bleak November morning. I’ll not drag down this thread with a recounting, but every damn track is still incredibly relevant and really helped me cope. Thanks Mr Pink.

FYI, there is a 2018 remix/re-release available to buy/stream, which of course was delayed until this past summer because Roger and David had to bicker over liner notes.

I wish it included this.

incredible. it’s SO good. i think i prefer it now.

also, i now have some heavy duty ammo for playing devil’s advocate in case i ever want to try and defend 8-tracks.

I agree that it would’ve been cool and appropriate to include as a separate track with the 2018 remix that came out this year.

Tangent: BTW I’ve heard the high resolution 2ch and surround version of the remix and it’s quite different from any prior release, and a lot of fun if you’re a fan. The dynamic range is opened way up, and much more of Richard Wright’s keys are in the foreground, and such a cool presence. James Guthrie did it justice, just as he did for DSOTM.

My only remaining tape player is a 4 track porta-studio thing. You can set it to listen to the wrong side of a cassette (i.e. play the side backwards) and I was surprised by how much of the studio side of Ummagumma is just folky acoustic guitar. So much backwards masking… 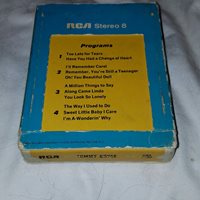 Believe it or not, there are pieces of music that can be found on no other audio format but 8-track tape.  One example of something that exists only on 8-track:  this brief instrumental passage from Lou Reed‘s 1973 album, Berlin, that...

More info about other rare bits of 8-track ephemera. Alas, the rare 8-track piano minute from Lou Reed’s Berlin seems to have left the internet.

Now I’m very confused, because this is identical to the mp3 version on my computer I’ve been playing for the past 15+ years. Just played them in sync and there’s no difference; same solo.

There’s a bootleg from Frankfurt '77 that has a similar solo played by David Gilmour after Roger finishes singing Pigs on the Wing Pt. 2 and before Pigs Three Different Ones. I heard it on cassette years ago. It’s pretty short, but always thought it was a sweet solo and a shame that it didn’t make the album. It’s on youtube if you search. Cool that something like it was on the 8-track.

…this is all very odd, considering the full track has been available since 1995 on Snowy White’s album Goldtop lol.

The now legendary first Flatlanders album only came out on 8-track in the 70’s, and I think ended up primarily being sold in truck stops (which I guess was like a rural version of LP cutout bins in big cities.) 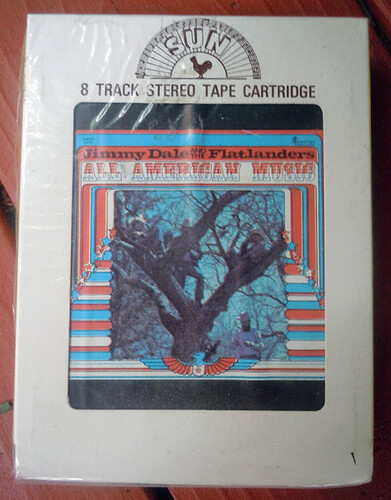 Jimmy Dale And The Flatlanders - All American Music

Explore songs, recommendations, and other album details for All American Music by Jimmy Dale And The Flatlanders. Compare different versions and buy them all on Discogs.

Confirmed, now it lines up perfectly with Animal Farm (1954).

When CDs became all the rage there were many hidden tracks put on a few CDs.

One of the best, if not the best is Track 13 on Made In Heaven by Queen. The CD ends after track 12, It’s a Beautiful Day (reprise) followed by 4 seconds of Freddie improvising Yeah. After a few more seconds you get an awesome 22 minute instrumental that most Queen fans believe is the band’s send off to Freddie or it depicts Freddie’s journey to heaven. Either way it’s a great track.

Intended to be read in your best Syd Barrett head voice impersonation: It’s quite a lovely solo, both unique and strangely familiar, and one I’d never heard, despite all the Pink Floyd and associates songs I have listened to over the years. It’s really quite funny, in perhaps a sarcastic sort of way, that the Animals CD sandwiches all the songs in between the first and second half of the Pigs on the Wings song, yet omits that solo. It feels a bit like the work of pigs.

I chuckled, I had the 8 track. I found it on youtube probably a dozen years ago after I pitched the 8 track (it was shot anyway). Still an amazing track.