Thou shalt not commit logical fallacies!

And I have reason to believe you did not read the article or any article highlighting the problems surrounding dress code, because you were making well-worn fallacious arguments in place of nearly any of the top google results on the subject. Even as unlikely seeming a source as Teen Vogue covers the issues as well, and expresses many of the questions you raise directly:

Why Sexist Dress Codes Suck for Everyone

We need to keep speaking out against them.

And for your review, there is an easy way to understand common logical fallacies here: 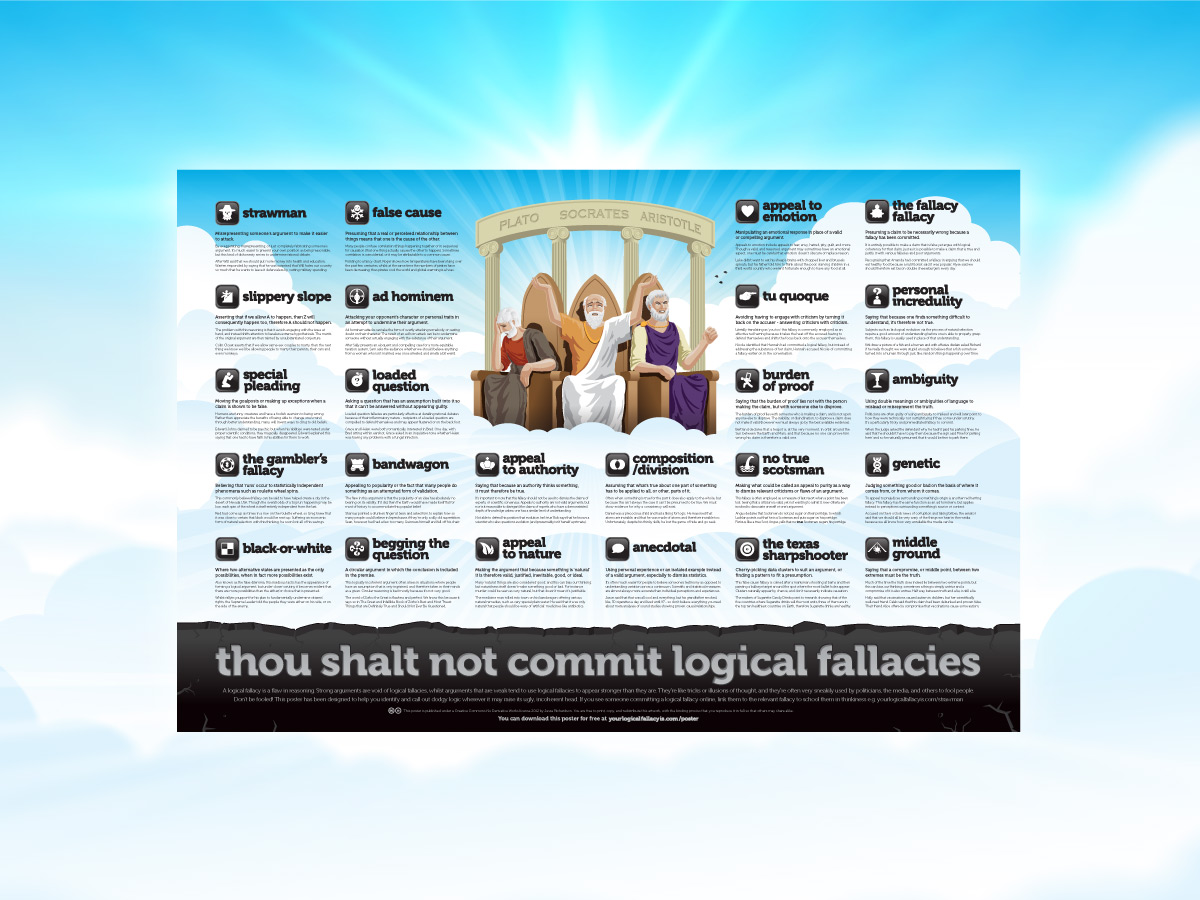 Thou shalt not commit logical fallacies

A logical fallacy is a flaw in reasoning. Logical fallacies are like tricks or illusions of thought, and they're often very sneakily used by politicians and the media to fool people. Don't be fooled! This website has been designed to help you...

I hope you read things like this and realize that pointing out flawed logic and snarky links to legitimate sources for these issues are not personal attacks against you, but recognized forms of criticism against arguments against a thesis (in this case “are dress codes sexist”) and snark is encouraged by @orenwolf and the staff.

I’m not looking to ignite an argument, @orenwolf has made it clear that this is a thread for moderation but if you wish to continue to discuss logical fallacies and what they mean or even a more general dress code topic you should start a thread, we are always encouraged to do so!

I don’t find pointing out fallacies or biases to be aggressive. Honestly, I wish that more people did this with me. It’s certainly a lot more educational than being avoided, or having others disagree with what you didn’t actually say.

I don’t find pointing out fallacies or biases to be aggressive.

1st, I didn’t say pointing out fallacies is aggressive, the whole tone of the post was. And it was directed at me for a point supported by other members. 2nd, simply saying “that’s a fallacy” isn’t pointing it out and explaining why it is, it’s exactly like saying “no, you’re wrong”, where nothing is learned at all. If anyone should support the battle against “self evident truths” I would think it would be you.

I agree with you that pointing out fallacies in itself does not convey an alternate position or perspective. So I simply don’t treat it as if it does. A person can state their disagreement without backing it up in detail, and I think that is somewhat less engaging and insightful.

I tend to think of it less in terms of a contest of having the best/right answers. Sometimes I can easily point out to a person that what they aspire to seems unlikely to work. Not unlike navigating a map - “If this is where you actually are, and this is where you aim to go, then this path won’t ever get there.” I may or not agree, but either way I try to avoid taking it personally.

I don’t take reasoned, thoughtful argument personally. But that thread started getting “how can you be such a moron that you don’t see that we’re self evidently right?” The intrinsic hypocrisies of the “fallacies” was more of it, including, as I pointed out, both criticizing me for an anecdote and using an anecdote as proof in the same post. And I’m sure someone will archly quote: “a foolish consistency is the hobgoblin of little minds” to justify their hypocrisy. Clearly this logical fallacy crap is the turf of the “trained academic debater”. “Everyone says its true” is fine until its something you don’t like, then it’s a fallacy.

The bandwagon fallacy is a fallacy where you leverage agreeable individuals as the proof towards your thesis. What you said was in the spirit of “I must be right, because I can find others agreeing directly with my statement,” which is equally as flawed as tying the quality of a product to its sales figures or the views it got on YouTube or the money it made in the Box Office. Since you were trying to provide proof for your statement the rebuttal of the bandwagon fallacy is accurate.

As far as using articles being “part of a bandwagon,” that logical fallacy is known as tu quoque. It’s a self-defeating argument that says that I am incorrect because I am doing the exact same thing (whether I am or not). You used the same flawed argument in the other thread claiming your personal anecdote was the same as saying authored work on the subject. A proper argument would describe the flaws in the work, using counter examples from your own (lacking) citations.

Now as far as arguing that you have the same expertise as authored work, that’s just old-fashioned incorrect unless you can cite credentials on the subject. However, your initial entrance into the topic was to ask for evidence that the problem exists at all, which is a claim to ignorance on the topic and not expertise.

And skipping down to rebuttals, saying you are employing logical fallacies are indeed a valid argument. The burden is not on me to prove you are wrong, that’s trying to shift the burden justifying your thesis onto someone else. I did not supply the thesis, you did. It is your burden to convince others you have sound reasoning to suggest why what your are saying makes sense. In the conversation about school dress codes you used a laundry list of illogical claims to support a thesis you were only afforded yourself to imply and not state outright.

What you are describing in my actions that your find offensive is my unwillingness to critique your posts, which as far as dress codes are concerned I still have little desire to do so. This isn’t the first time that after a lengthy trail of fallacious logic you ended up claiming to be the victim of perceived ad hominem attacks, so this dialogue might open your eyes a bit. I, as little as you care to admit it, refuted your posts in a way you did not like. You never challenged my reasoning, you just reaffirmed positions using more fallacies that’s built on top of each other. The only direct attempt to refute me was to declare me performing ad hominem against you and posting in an aggressive tone - and here is where you are partially correct. I absolutely used a combative tone, just like you are here - but as you can see I have decided to engage you with the intention to opening a proper critique of your own style that turns others off.

As for the ad hominem, that still requires me making an attack against you as a person and not the words you are putting in place in your posts. For example, calling my posts pedantic squealing is a form of an ad hominem attack - especially if you have to use an outside justification of “your tone wasn’t correct for an arguement” or “the moderators decided to favor you” to justify the use of what you know to be insulting in the same post.