I think this is exactly the point. It’s supposed to be over the top. It’s not about irony, it’s about following the absurdity to a legally defensible “T” in exactly the way they don’t want it to happen.

I think you are right - to me it isn’t the Mx, but that it was “being distributed by teachers” rather than posted on reddit or twitter or something. It would have spread like wildfire had anyone doing this as malicious compliance posted about it anywhere.

But either way, they’ll see that those godless Demcrat pedos are celebrating this letter, which proves that this has been their (plural! Not singular!) agenda all along, and will be the basis for requiring teachers to sign a Gender Conformity Pledge and vow to uphold traditional gender roles in and outside the classroom.

This letter is not in good faith.

Again, I acknowledge that I may be wrong in thinking this letter is a product of the Right rather than the Left. I’m still suspicious. As chenille says,

[the law is] literally just what the Right is actually demanding from trans people.

This letter says exactly what the Right and loons like Moms 4 Liberty tell their followers will happen if we don’t silence the wicked gay, trans, etc. etc. loving Left. Written by a Lefty, it’s good for a couple of troll points scored against recipients who’ll never get the joke [as well as endangering said Lefty’s job and possibly life]. Written by Moms 4 Liberty it’s a perfect example of “See? We told you! We told you it’d be like this!”

As others have noted, the generations-long battle to destroy public education–while maintaining the flow of public money into private indoctrination-mills, of course–is continuing with renewed fervor. A letter like this proves their own point that gay, trans-loving, Commie teachers view with contempt everything that True Americans hold dear. Hence my impression that it’s a fake. I rest my case and await either the note’s authenticity or its falsity being ascertained.

Which sort of certainty becomes, alas, increasingly difficult in a world awash in lies.

. I rest my case and await either the note’s authenticity or its falsity being ascertained.

Well, I mean it was directly posted by Mom’s 4 Liberty to their twitter account, where you can see a whole bunch of horrible things. Whatever their game, it’s their letter. 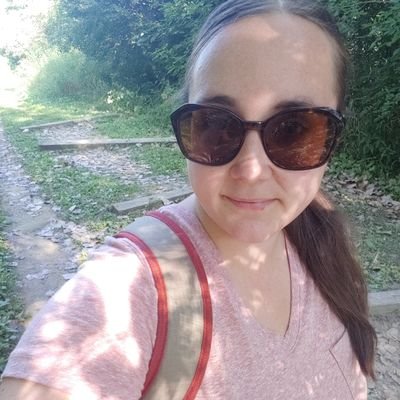 @KaylaPekkala
Instead of targeting the LGBTQ, the right should be looking real hard at the straights for child grooming. https://t.co/5MgD4t5Mtr
15 Likes
chgoliz April 3, 2022, 4:35pm #28

That’s just horrifying. On so many levels.

Oh, that is JUST PERFECT. I absolutely love this.

Well, if pictures of nude children and be considered art, ie. Sally Mann’s Immediate Family, then why shouldn’t a loving parent be able to make a few bucks selling prints of his daughter fully clothed? As long as he brings her to church, that is.

To summarize, this is solipsistic thinking in action.

I’d like to see some parent (or maybe a grandparent, since this is Florida) with the time and money to spare choosing to test that theory.

Yeah, there’s a definite inability to recognize that people have different beliefs/worldviews than them. At best they see the world as “them” (people with their beliefs) and “not them” - where the “not them” aren’t people with different beliefs, but people who are fundamentally exactly the same as them and have the same worldview but for some reason deliberately do the “wrong” things. And this really applies to everything - atheists/non-Christians are just Christians who want to sin (or otherwise “hate god”), foreign languages are really just English, but put through a cypher system (so, for example, a Chinese character will directly represent an English word or even letter), etc.

Indeed; that just sounds like some ‘do-nothing’ gas-lighting bullshit to my ears.

Also, the letter in question should be posted here, as the snark therein is truly a thing of beauty: 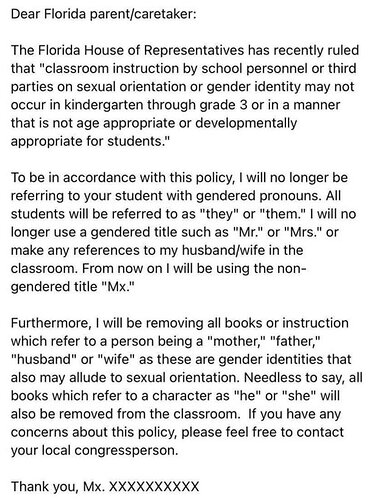 For sure. I have seen waaaayyy too much creepy stuff - coming from MOMS, mostly - from good ol’ red blooded American heterosexuals.

Like if your kiddo wants to do some dance lessons, look closely at the walls where they have group photos from their dance routines. If you can, ask to see a recent recital video. If the costumes and/or dances are not what one considers age appropriate, then look for another place. Some of the schools (and apparently the parents) have, IMO, shockingly bad different opinions on what is appropriate for little kids.