Three-ounce silicone bottles to hold your goops when you travel

Just don’t fill them with lube.

Do they still make you pull out small things of liquid and gel at airports? Because I accidentally left mine in my bag four years ago, no one said anything, and I don’t bother anymore. I don’t even put them in a ziplock like they say. It’s all travel sized, and less than the amount they mandate, so it’s no big deal, but still…

They seem to be more relaxed about it now. I put my stuff in a gallon ziploc and they don’t tell me it has to be a quart ziploc.

Or a lot of other liquids/gels either. I forget what the type is, but there’s a whole category of stuff you can’t put in these containers, and it includes things that are normally part of a traveling toiletry kit.

My wife learned the hard way. The bottle became less of a solid and the lube inside became incredibly sticky and no longer functioned as intended.

I never take mine out, and don’t generally use a quart bag, either.
I have a travel kit I got off Amazon that I love and all my stuff is in there under the limit.

I have a bad experience with silicone bottles with an integrated suction-cup. On more than one trip the suction cup lost adheadsion, fell and the impact cracked the plastic cap hinge.

That said, silicone squeeze bottles are great for travle, I just won’t buy them with suction cups again.

I’m always baffled as to why silicon bottles like this are so expensive. They’re just plastic, right? Plastic that’s $5 per bottle?

Somebody should make 4oz versions and write “3oz” really big on them.

Not that I’d recommend anybody bring such incredibly dangerous quantities or shampoo on an airplane or anything, but just in case you wanted to…

I have a 2 oz one and a 3 oz one, and they are damn near the same size if you don’t look too closely.

I’ve never tried to fly with silicone jugs (other than yourmy mom) but I did get the stinkeye for trying to bring spackle snd a putty “knife” on board. Probably more worried my non-union self was going to encroach on their territory than anything.

These bottles are the bomb.

Another buy something post by mark hah. Wouldnt be surprised if this did magic tricks too as well.

It’s like a cute and colorful way to declare surrender!

Just don’t fill them with lube.

Huh? Oh, right, silicone-based lube. Yeah, anything that contains liquid silicone will also have a solvent keeping the silicone liquid, which will attack silicone bottles as well. You should be fine with water-based lube, same as recommended for silicone toys.

Non-Recommended
While the range of chemicals used in modern cosmetic and personal
care products makes comprehensive compatibility testing impossible, we
have consistently noticed problems with the following chemical
groups/product types and recommend against using them in GoToobs:
-Alcohols (Note: Alcohols may be present in many cosmetic products,
including make-up remover, mouth wash, astringent, hair serum,
aftershave, and insect repellent).
-Salicylic Acid (most often used in acne treatments).
-Hair serums and treatments (detanglers, relaxers, volumizers,
polishers, smoothers, shine serums, etc.) including shampoos and
conditioners designed to add shine or luster to hair as well as
products with Argan Oil (like Moroccan Hair oil).
-Silicone-based lubricants.
-DEET-based insect repellent.
-Hydrogen Peroxide.
-Sterile products. Note: Even though sterile products may be fully
compatible with silicone, GoToobs are not sterilized. Therefore, we
don’t recommend GoToobs for use with fluids where sterilization may be
an issue, such as contact lens solution. This includes liquid or
semi-liquid prescription medications.
-Caustic, corrosive, or flammable products. Note: Many household
chemicals are sold in specifically designed plastic or glass containers
specified by the manufacturer and should never be decanted. GoToobs were
designed for personal care or food items you may need while
traveling–not bleach, drain cleaner, fire-starters, or hydrochloric
acid.

Recommend Testing First
The following products are compatible with GoToobs in most cases.
However, we’ve heard of problems in some cases when using these
products and recommend testing a small amount in a GoToob overnight
before general use or travel.
-Personal lubricants (non-silicone based).
-Almond butter.
-Liquid sweeteners (especially Stevia).
-Essential oils.
-Sunscreen and tanning lotions.
-Skin conditioning oil formulations.
-Castille soap.
Note: You will know if your fluid is incompatible if it leaks from
the GoToob, changes the shape or color of the silicone tube, evaporates
from the tube, or dries up shortly after being put in the tube. Most
reactions occur overnight; this is why we recommend an overnight trial
run with a new product.

The hair products section was enough to warn us away, since it’s too hard to remember which containers can be used by which person/product so it’s easiest if we all use the same.

Hmmm. I wonder if these are food grade? I have been looking for something to put condiments in my wife’s lunchbag for work. Mustard, mayo, sriracha, salad dressing etc.

We use something a little smaller, the Evriholder brand, which is made for it: 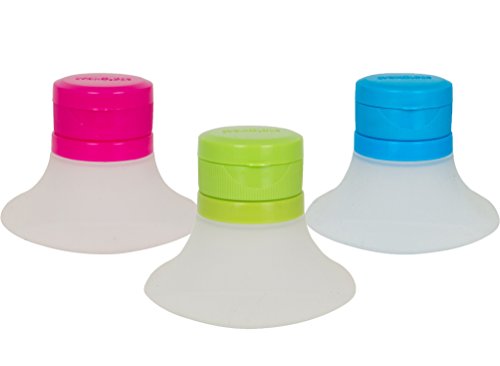