“So how much exactly of this supposedly 100-200k is going to habitat to humanity?”

Does it really matter, and is it really any of your concern? It’s his find, his money. I think it’s admirable that he wants to share some of his good fortune, and if he doesn’t, I’m fine with that too. If something this minor piques your inner social justice warrior, your existence must be very stressful.

Based on the article, the sketch hasn’t sold yet, so there’s no profit to donate.

To be fair the Taliban were just following the example of Mohammad smashing all the idols in the Kaaba. You know, 3rd commandment and all. (insert winky face here)

My mom would likely hang this in the guest bathroom.

My 10-year-old granddaughter draws better but isn’t paid. Is there a correlation?

Killed by a pencil while laying on paper? Tough way to go.

And yeah, I’m going to go there: the work looks like rubbish that my kids could draw, but they aren’t famous so no $200k for them.

And yeah, I’m going to go there: the work looks like rubbish that my kids could draw, but they aren’t famous so no $200k for them.

A great many works of art are valued not so much for their artistic skill or aesthetic value, but for their place in history, whether as an example of show of opulence, technical innovation (knowledge and understanding of physics and visual perspective), or even the politics behind the movement.

Without the concepts of independence and scientific discovery at the forefront, and the development of easily portable tubed paint, the Impressionists would likely be a footnote in history.

technical innovation (knowledge and understanding of physics and visual perspective)

That I can get on board with. This work? Not so much.

However, thank you for keeping me in check and reminding me that everyone has their own tastes and desires to spend their money how they see fit. If someone has $200k and wants to buy this, it’s their prerogative.

Example: I’m not a car guy, so when I see folks driving around in something that could buy a small house I sometimes get annoyed, so I have to remind myself that some of my spending habits probably annoy other people, too.

That I can get on board with. This work? Not so much.

This work is also likely a hurried sketch, hence my grocery list joke above. Egon was a very technically skilled artist, but was choosing to move toward a more loose, Expressionist style for many reasons. 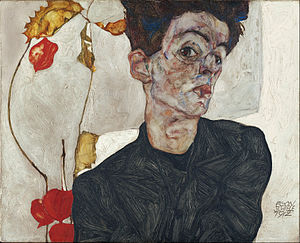 Egon Schiele (German: [ˈʃiːlə] (listen); 12 June 1890 – 31 October 1918) was an Austrian painter. A protégé of Gustav Klimt, Schiele was a major figurative painter of the early 20th century. His work is noted for its intensity and its raw sexuality, and the many self-portraits the artist produced, including naked self-portraits. The twisted body shapes and the expressive line that characterize Schiele's paintings and drawings mark the artist as an early exponent of Expressionism. Schiele was bor...